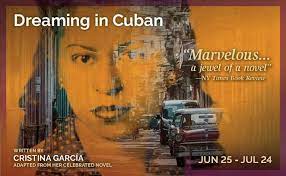 Political differences have shattered families and friendships since the dawn of history. Cristina Garcia’s “Dreaming in Cuban,” by Berkeley’s Central Works through July 31, examines the impact of the Cuban revolution on a family irreconcilably divided by the event and its ideology.

The time is 1979-80. Mary Ann Rodgers stars as Celia del Pino, a true-believer revolutionary whose two adult daughters have gone in vastly different directions. One, Lourdes (Anna Maria Luera) left Cuba to open a successful bakery in Brooklyn, NY, while her rudderless sister Felicia (Natalia Delgado) chose to remain on the island. Among the many “gusanos” (worms) allowed to depart in the wake of the revolution, Lourdes is adamantly pro-capitalist and anti-communist. Her mother is the opposite, with a near-religious faith in Fidel Castro and his cause.

Central Works has a tradition of performing new plays…

Living far apart, they’ve had little communication until the sudden death of Felicia brings Lourdes and her artistic teenage daughter Pilar (Thea Rodgers) back to the island for the funeral. The story of the two sides of the family unfolds in parallel, going back and forth between Lourdes/Pilar and Celia/Felicia.

Pilar proves to be one of the script’s most interesting and most malleable characters, with the biggest character arc. As a teenage lefty, she has doubts about the benefits of capitalism and some sympathy for the social experiment taking place in her ancestral homeland, somewhere she’s never visited until late in the tale.

In significant ways “Dreaming in Cuban” is told almost passively from Pilar’s point of view, and more assertively from the perspectives of Celia and Lourdes. Familial love runs deep, but not deep enough to fill the divide between those on opposite sides.

Pilar’s starry-eyed fascination with the revolution is tempered by a few days in Cuba. She’s the delicate suspension bridge between two previous generations. No longer enamored with communism, she comments near the end of her visit: “Utopias have a terrible track record.”

Working in a small space in the Berkeley City Club, Julia Morgan’s beautiful old building on Durant Avenue, Central Works has a tradition of performing new plays with almost no set, relying instead on a few essential props, some projected images, and great sound design by Gregory Scharpen, almost compensating for the emptiness and constraints of the space.

The performers in this production are generally quite good, especially Rodgers, Rodgers, and Luera. Eric Esquivel-Guiterrez does a nice turn as Max, Pilar’s Brooklyn-based musician boyfriend, and as Ivanito, Felicia’s son. Steve Ortiz appears in two minor roles, and voices a couple of announcers.

Developed from her novel of the same name, and directed by Gary Graves, Garcia’s play has enormous potential, not fully mined in this production. The near-total lack of set requires the audience to do an unusual amount of filling-in-the-blanks that isn’t counterbalanced by impassioned performances and excellent sound design.

Theater goers may find a lot to like in “Dreaming in Cuban,” especially should it be undertaken in a larger venue. The City Club production won a “Go See” recommendation from the San Francisco Bay Area Theatre Critics Circle.