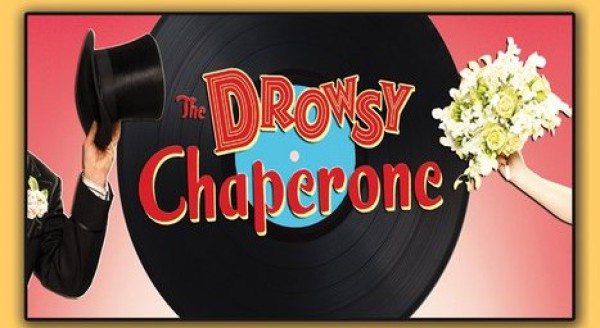 What do a tipsy wedding chaperone, a blundering Italian lothario, a pair of mobsters disguised as pastry chefs, and a musical theater-obsessed divorcé in an armchair have in common? They’re the unlikely ingredients for a night full of toe-tapping music, fun, and laughter in Sonoma Arts Live’s production of “The Drowsy Chaperone,” on the Rotary Stage in Andrews Hall through July 31st.

With a delightful script that both celebrates and pokes fun at roaring 20s era musicals and vaudevillian hijinks, the show opens on North Bay stage veteran Tim Setzer – billed only as “Man in Chair” – regaling the audience with his love of classic musicals and ironically, his hatred of theater that breaks the fourth wall.

But lucky for us, Setzer’s character continues to shatter that fourth wall to smithereens, with his frequently hilarious, oftentimes snarky, and occasionally sweetly reflective commentary. From the comfort of his armchair, he puts on a record and invites us to listen along to his all-time favorite musical as it comes to life before us on the stage.

With a quirky cast of characters, a bevy of silly song and dance numbers, and a classic will-they/won’t-they-tie-the-knot set-up, “The Drowsy Chaperone” – a fictitious musical from the late 1920s – is fantastic light-hearted fun, punctuated by catchy tunes and comical mishaps aplenty.

The production features some excellent ensemble work and a host of talented performers, though Daniela Innocenti-Beem steals the show with her powerhouse vocals. She’s an absolute hoot in the title role, too, stumbling in and out of scenes in a semi-drunken stupor.

. . . the perfect happy escape for anyone seeking a bit of refuge and good-natured fun.”

Andrew J. Smith is equally uproarious as Adolpho, the cape-clad caricature of an Italian ladies’ man, on a mission to break up the wedding. Maeve Smith takes an endearing turn as bride-to-be Janet Van De Graff, boasting a beautiful voice and a (deliberately) terrible French accent. Setzer is the show’s anchor, and phenomenally good in the role of “Man in Chair,” chaperoning us through the action on stage.

Supporting cast members are marvelously entertaining, too. Jonathen Blue shines as George, the tap-dancing best man, joined by Stephen Kanaski, who makes a charming groom-to-be and earns laughs with his blindfolded roller-skating. Emily Owens Evans perfects the ditzy aspiring starlet trope as Kitty, and Sean O’Brien deserves kudos for enduring a series of preposterous spit takes in the role of “Underling.”

Liz Andrews has done an admirable job with style and period-appropriate choreography for this show. Rebecca Ann Valentino’s costumes deserve a nod, too, thanks to an array of fabulous, flapper-inspired frocks and a host of other elaborate get-ups that add immensely to the fun.

Brindle Brundage and Ryan Severt have designed and built a simple but charming set, with a clever layout enabling it to serve as both Setzer’s apartment and the stage for a full-ensemble musical. From ringing phones to record players, sound effects by Tom Luekens are perfectly timed. The accompaniment of a live band under Sherrill Peterson’s direction makes the music loud and lively, though at times it drowns out the singers on stage, due in part to the hall’s challenging acoustics. But any bumps in the road are easily forgiven amid the merriment.

As the “Man in Chair” reminds us, music and theater have the power to transport us away from our daily stress and struggles when we’re feeling blue. “The Drowsy Chaperone” is a celebration of this power, and the perfect happy escape for anyone seeking a bit of refuge and good-natured fun.