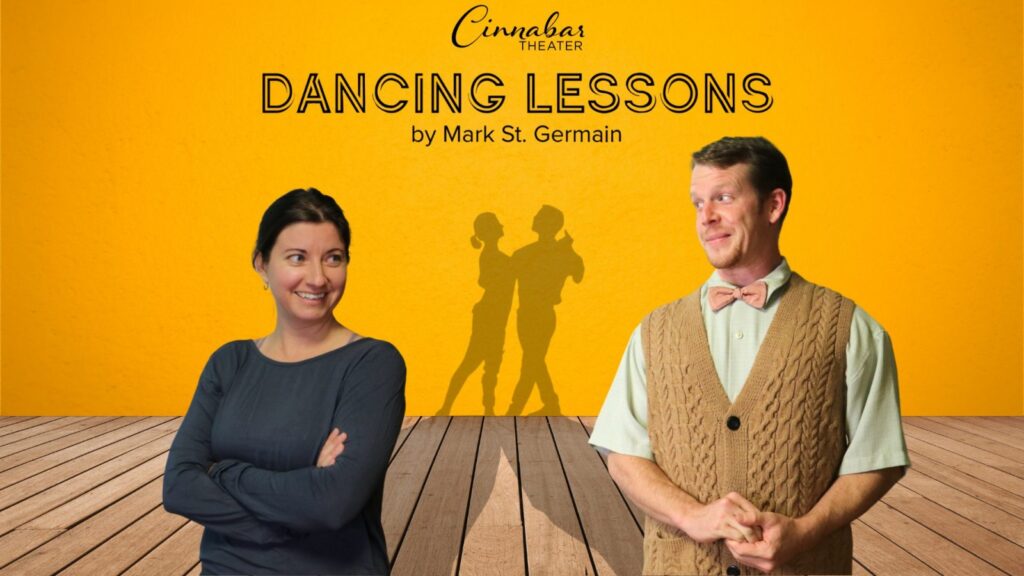 An autistic scientist and an injured dancer find solace and hope in Cinnabar Theater’s “Dancing Lessons,” through October 31.

Jessica Headington stars as Senga, a dancer who has suffered a devastating and potentially career-ending knee injury. Trevor Hoffmann is Ever, her pesky upstairs neighbor who badgers her to give him dancing lessons so that he can fulfill his function as emcee of an upcoming awards gala. Their initial meetings couldn’t be more contentious or less promising – she’s in an enormous amount of pain and anxiety, and he has little emotional empathy and limited social skill.

Mutual impairment, distrust, and animosity at the start: a fantastically potent setup that scriptwriter Mark St. Germain spins into one of the loveliest romantic comedies ever conceived. A career writer for television and film, St. Germain has an unerring eye and ear for what works in telling a story. His script is absolutely pitch-perfect: every word uttered by the actors and every action they make propel this tale of an unlikely but totally plausible relationship. His characters’ conversations are sometimes terse but never artificially truncated, and sound perfectly natural as Senga and Ever grow more familiar with each other. “Dancing Lessons” is a theatrical rarity in that it contains neither fluff nor filler.

The ebb-and-flow of this production is a master class in onstage storytelling, with rhythm and musicality like a minor-key symphony. Director John Browning has coaxed a stunning performance from his cast of two superbly talented actors, aided by Wayne Hovey’s elegant set that serves as Senga’s apartment, Ever’s office and classroom, and an auditorium where Ever speaks to the National Autism Coalition. Hovey also served as lighting designer; his work adds much to the show’s evolving mood.

Not enough praise can be showered on Headington and Hoffmann, both of them fully invested in their characters and both of them totally comfortable with and trusting of each other. It’s an amazing balancing act in that the dynamic differences between Senga and Ever ultimately blend together so well in a heartwarming pas de deux—both literal and metaphorical.

“Dancing Lessons” is the kind of show that makes a critic’s life rewarding. With just a pinch of magical realism, it’s certainly the most satisfying romantic comedy this reviewer has ever seen—just absolutely right from beginning to end, and more than worthy of multiple viewings, a wish this writer intends to fulfill.

Kudos to Cinnabar for bringing this wonderful production to life in the wake of the marvelous “Cry It Out.” The Petaluma company has a perfect track record so far as theater companies emerge from

COVID-induced hibernation. Proof of vaccination is required of attendees, as is the wearing of masks during performances. For those still unwilling to venture out, “Dancing Lessons” will be available online October 29-31.