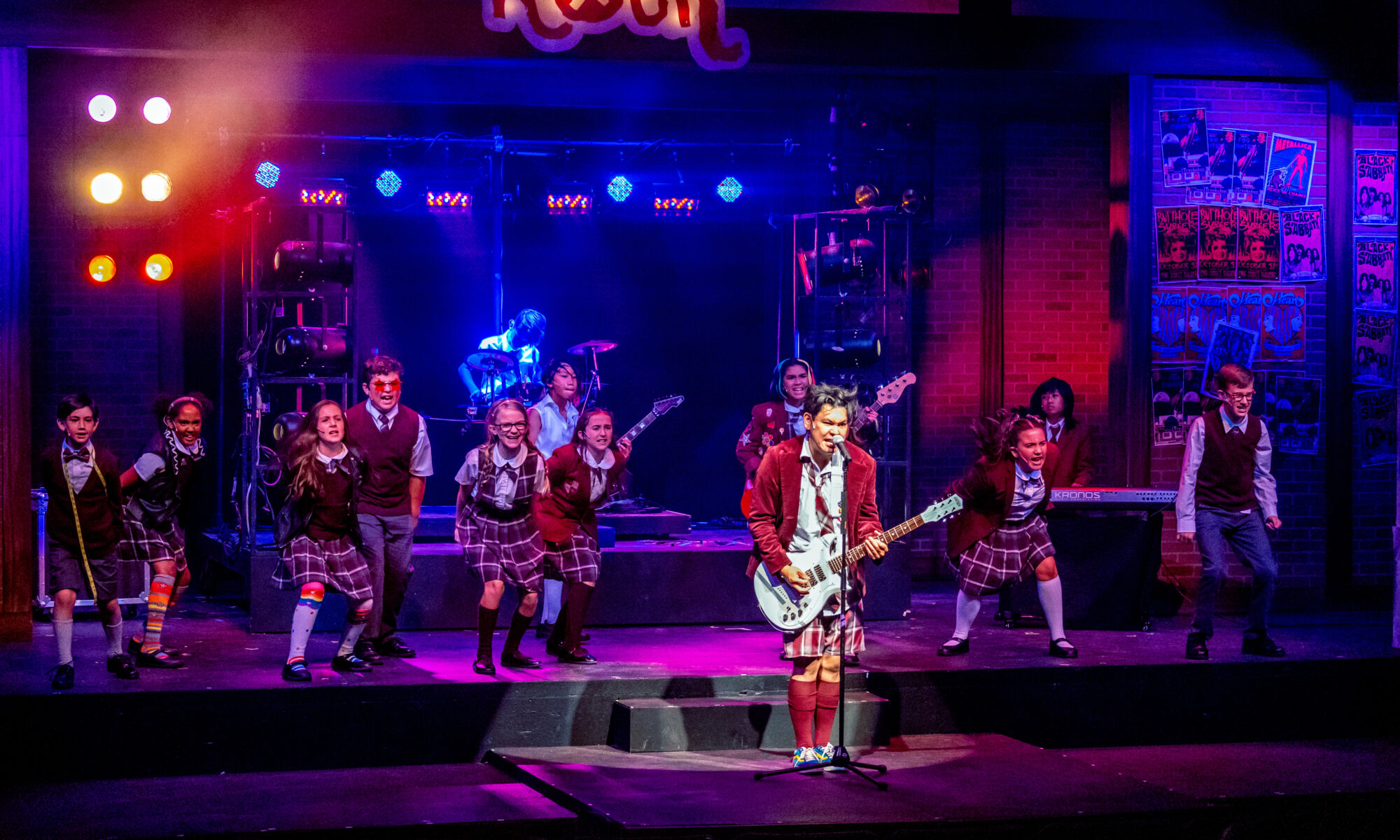 With a bushel of fresh-faced, multi-talented kids, Palo Alto Players has a hit on its hand with the broad comedy “School of Rock,” playing through Sept. 11 at Lucie Stern Theater.

Sure, there are tons of hackneyed caricatures in “Rock,” the kind that Julian Fellows creates here. In fact, almost all the production’s adults are caricatures, the better to contrast with their earnest, brook-no-prisoners reactions to the show’s fifteen kids.

…A special shoutout to the four youngsters who played their own instruments in solo numbers….

What’s even more amazing about these pint-sized stars is that the four youngsters who ultimately become members of the kids’ band are actually playing their instruments live. They do so despite the fact that a number of adult musicians are also playing in the orchestra pit during the show.

Yet one adult actor – the crazy-good Jomar Martinez, playing out-of-work musician/faux substitute teacher Dewey Finn – stands out simply because Dewey is a kid at heart whose two loves are playing music and sleeping. Dewey is living in the bedroom of an apartment owned by his old bandmate, Ned Schneebly (the bland but affable Zack Goller) and his fiancée Patty Di Marco. Amanda Le Nguyen plays Patty with waaaay too much veracity—her Patty is so demanding that it’s hard to imagine she and the affable Ned would ever have connected.

It’s obvious director Doug Santana put a lot of love into this production—his own daughter Maddie plays one of the precocious kids! While he let the kids shine as much as they are comfortable, it might have made the show a little more reasonable if not every adult except Dewey was unpleasant or bland.

As Rosalie Mullins, the headmistress of the posh Horace Green School, Amy Kohmescher comes close to playing another caricature. But she loosens up when she agrees to have a cup of coffee with the ersatz substitute teacher. Turns out the coffee date is in a bar and with each sip of beer, Rosalie loses her inhibitions and becomes more fun. She and the disheveled Dewey even share a quick kiss as they part.

But the kids are really the heart and soul of “School of Rock.” From reading their biographies, most are middle school or high school students, although at least two are fifth graders. Nearly all have had drama experience either at their schools or with local theatre productions.

A special shoutout to the four youngsters who played their own instruments in solo numbers: Adeline Anderson who, as Katie, played bass; Alex Pease playing drums as Freddy; CJ Fernando as Lawrence with his socko piano playing; and the blow-it-out guitar playing of Rafael “Rafi’ Frans as Zack.

Choreographer Joey Dippel smartly allows youngsters with previous dancing experience to lead the musical numbers, yet gives every one of the kids a chance to at least “doo wop,” dance, and sway to the beat.

Andrew Lloyd Webber composed “Rock’s” musical score, and Glen Slater provided lyrics. It has several memorable numbers, most notably: “You’re in the Band,” “Where Did the Rock Go?,” “School of Rock” and “Stick It to the Man.”

Costume designer Noreen Styliadis really hit the mark here with cute maroon-white-and black plaid school uniforms worn by almost all the kids. She pulls off a coup when she dresses Martinez in – well, you’ll just have to see “Rock” to find out.

All in all, definitely worth the 2 ½ hours (with one 15-minute intermission) for young and old alike to revel in the clever joyfulness of “School of Rock.”