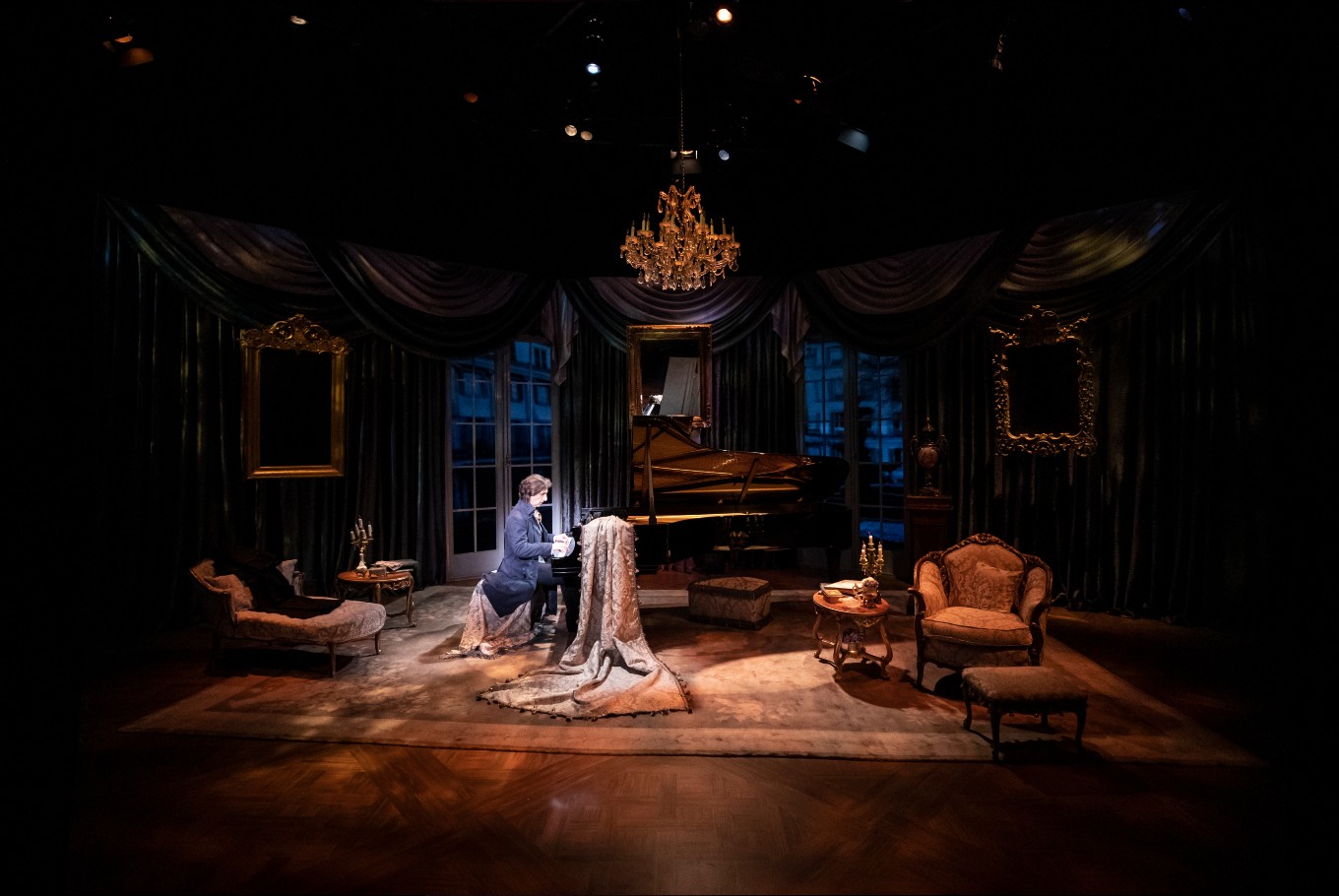 The date is March 4th, 1848, mere days after the violent February Revolution in Paris and we, the audience, are among the privileged piano students (here for a lesson) from whose wealthy and illustrious families Chopin makes his living. Making a light-hearted joke about having just had “tea” in the rooms of a lady, Chopin – who had a reputation as a ladies’ man – proceeds to mesmerize his audience with detailed accounts which bring vividly alive the intimate details of his too-brief existence.

…Hershey Felder is simply a genius….

Over the following ninety minutes—no intermission—his students experience the full spectrum of human emotions. Using nothing but words and gorgeous renditions of many of his most famous pieces—gloriously executed on that spectacular Steinway—Chopin conjures those who inspired his genius and walks us through his musical passions and processes. 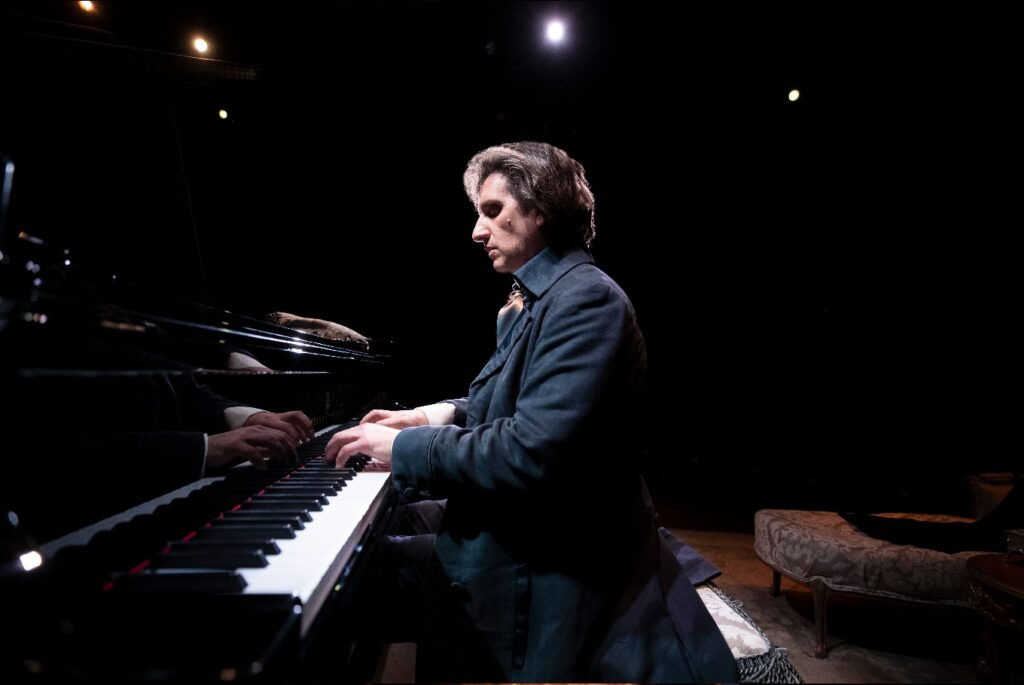 Several times breaking into his own narrative, Chopin invites his “students” to ask questions, responding to queries including, in part, the type and quality of sound of a piano typically played during that era, his greatest musical influence (Bach, from whom, he asserts, “we all just steal bits and pieces of his music”), and his feelings about his rival, Liszt.

Chopin played only thirty public concerts but made a reputation for himself in Paris playing in private salons at the homes of the city’s elite. While describing his distaste for pandering to some of his wealthy patrons, Chopin encourages his students who might find themselves playing under similar circumstances to ignore their surroundings and, “Play as if you are playing for God.” When he himself begins to play, one can only imagine the good favor with which God looks upon him.

Felder’s Chopin seems to have been resurrected, rather than contrived. Felder embodies the master with such seemingly effortless confidence that it is easy to lose sight of the fact that he has had to memorize almost everything Chopin is known to have uttered or written. That dedication to authenticity is, in part, what makes this performance so riveting. I do not enjoy the banal and often mistakenly applied term, “tour de force,” but even that phrase seems too mild to express the brilliance and artistry of Felder’s performance.

Hershey Felder is simply a genius. He is a conceptualist, playwright, virtuoso pianist, actor, and set designer. Did I mention that he also sings like an angel? In addition to the numerous solo shows Felder has created and starred in, including George Gershwin Alone, Beethoven, Monsieur Chopin and many others, he created his own arts broadcasting company during the Covid crisis, which allows him to reach a larger audience for his theatrical films. 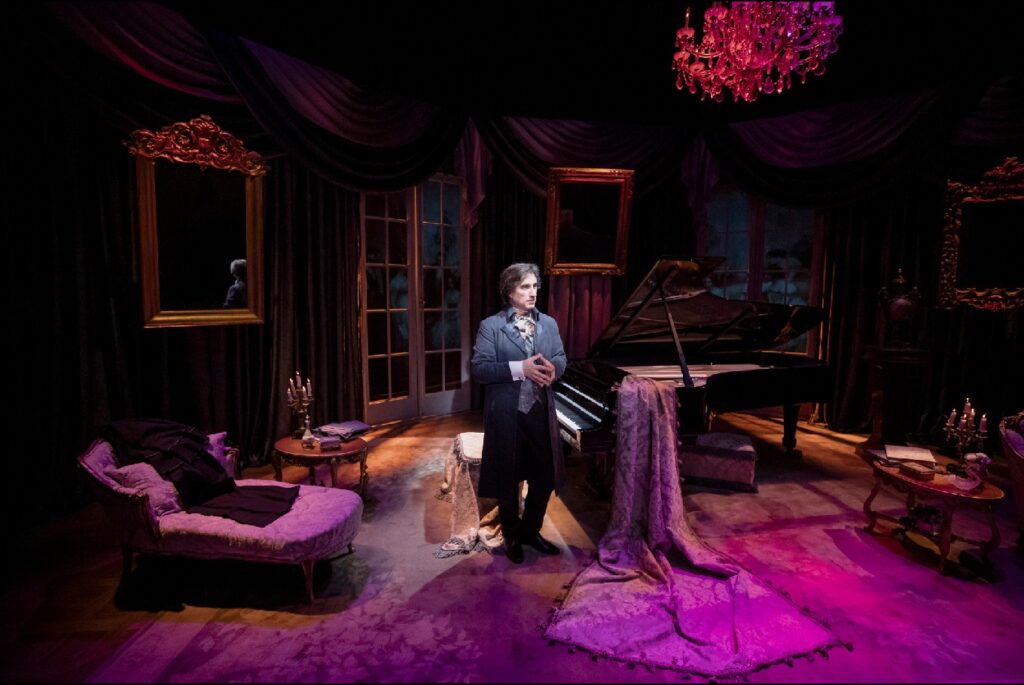 Director Joel Zwick (My Big Fat Greek Wedding) uses a light hand, allowing Felder’s deep understanding of his character full expression in both movement and mannerism. The scenic design by Felder is perfect in its authenticity, truly bringing to life the luxurious and rarefied setting of a salon for the highest echelons of Parisian society in the mid-1800s. The pink porcelain swan, on the Victorian side table, is an artful touch. Lighting design by Erik S. Barry enhances the elegance of the setting with its rich purple tones and rose/gold effect. Dimming the overhead stage lights brightens the candlelight whenever Chopin plays.

Video projections using flame effects and renderings of buildings or participants in the salon are good effects, but the overly large and bright image of a female disembodied head (George Sand? Chopin’s sister Emilia?) is a bit disconcerting.

Felder gives his audience the gift of being transported to 19th century Paris to sit at the feet of one of the world’s most renown musical geniuses – with none of the discomfort or inconveniences of that time – and plays music of such beauty it elicits tears. If you love theatre, classical music, sublime acting, or all of the preceding, do everything in your power to see Hershey Felder: Chopin in Paris. And bring your friends.

They’ll thank you for the experience.