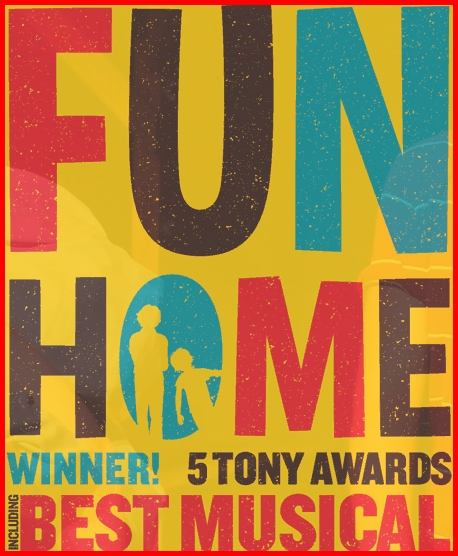 Reversing the Covid-related nationwide loss of theater venues, a brand new one has opened its doors in the North Bay: the “California” in Santa Rosa, CA.

Last week the 200-seat venue hosted a partisan opening-night crowd for Left Edge Theatre’s “Fun Home,” one of Broadway’s most controversial and ground-breaking productions, a musical adaptation of Alison Bechdel’s rich and complex 2006 tragicomic graphic memoir of the same name, with music by Jeanine Tesori, and book and lyrics by Lisa Kron.

A multiple Tony Awards winner, “Fun Home” was a finalist for the 2014 Pulitzer Prize for Drama. It’s a deeply personal yet refreshingly honest show, about family, gender identity and seeing one’s parents through one’s grown-up eyes.

The non-linear story follows Alison through her early life, as she recounts her fraught relationship with her long-suffering mother and her late father, a closeted gay man, who may or may not have committed suicide shortly after Alison’s confession of her lesbianism to her family. Despite having some pre-adult cast members, this show is intended for mature audiences and includes adult language and discussion of sexuality and suicide. At the same time it’s funny, sad, poignant, charming, endearing and surprisingly fun!

What joy to attend the Grand Opening of Left Edge Theatre’s new California Theatre in downtown Santa Rosa for the opening night performance of “Fun Home.“ Based on an autobiographical graphic novel by Alison Bechdel, “Fun Home” garnered five Tony Awards in 2015, including Best Musical and Best Original Score.

The September 3 sold-out performance at the California Theatre was packed with friends and family of performers and production company, and many fans of local theatre. Abuzz with excitement before the performance began, the audience generated appreciative, electric energy which remained throughout the night.

…there are…moments of poignant introspection, fun, and joyful revelation.

“Fun Home” is an exploration of Alison Bechdel’s memories of her family, her sense of alienation from her once-beloved father, and her awakening to her sexual identity as a lesbian, her first love, and the impossible cost of hiding her innermost self. “Fun Home” (short for “funeral home”) was the ironic nickname given by the Bechdel family to their family business, a mortuary run by Alison’s father Bruce, who was also a high school teacher, restorer of historic homes and a closeted gay.

The play begins as contemporary Alison, a graphic novelist, (capably played by Emily Jansen-Adan) stands at her sketch board trying to remember the details of her childhood as they unfold on the stage in front of her. Alison is also played as a young child and as a college student by Addison Sandoval and Rae Lipman, respectively.

While the subject matter is deeply fraught and sometimes tragic, there are also moments of poignant introspection, fun, and joyful revelation. The outstanding music elevates the production, contributing to a sense of intimacy as the audience listens in on the otherwise secret thoughts of the characters. The actors were clearly chosen for their singing, as well as acting chops, and all songs were deservedly met with enthusiastic applause.

Two performances stand out among many. In “Ring of Keys,” Addison Sandoval, (one of three child actors) playing “small Alison,” brilliantly conveys the dawning of her understanding of herself as “different” than other girls when she first encounters a very butch delivery woman and, with wide-eyed wonder and a foreign sense of yearning, sings, “. . . with your swagger and your bearing and the just right clothes you’re wearing, your short hair and your dungarees and your lace up boots, and your keys, oh, your ring of keys . . . I know you . . . ” Whether speaking or singing, young Addison does an excellent job throughout “Fun Home,” with a self-possessed sense of confidence and ease that make her a pleasure to watch. Addison, surprisingly, is a self-taught vocalist and has never had professional instruction.

The second standout was Rae Lipman’s rendition of “Changing My Major.” Waking beside her new lover the morning after their first sexual encounter, Lipman’s Alison emanates a sense of passion, wonder and gratitude at the miracle of the liaison. As she sings, “I’ve never lost control due to overwhelming lust, but I must say that I’m changing my major to Joan. I’m changing my major to sex with Joan, with a minor in kissing Joan . . . ” she brings the audience along with her as she circles the bed staring with a mix of ardor and tenderness at her sleeping beloved.

In his sixth performance with Left Edge Theatre, Bay Area theater veteran Anthony Marinez manages to portray Alison’s father Bruce with nuance despite the fact that the character is an egotistical, tyrannical husband and often overbearing father. Evoking enthusiasm, passion, righteousness, explosiveness, violence, sadness, and overwhelming desperation, Martinez is deeply compelling, and his exceptional voice lends itself beautifully to the production.

Elizabeth Henry plays Alison’s mother Helen with determined self-control. We can feel her inwardly seething, even when smiling politely as Bruce talks to members of the Historical Society about his restoration of the family’s museum-like home, which she is expected to maintain to gleaming perfection. Her rendition of “The Hours” brought me to tears.

Every member of the cast performed their roles admirably, both in terms of acting and vocals. In a few songs the performers sang different lines simultaneously in an attempt to express the chaos in the home despite the placid exterior. Unfortunately, the ensuing cacophony was too much for this viewer.

There were a few minor technical difficulties, not a surprise given that it was the first outing for Left Edge in their new performance space. There were problems with microphones, the live orchestra was at moments too loud, and the seating to the far left of the stage sometimes left us looking at the backs of the actors.

Minor issues aside, Left Edge Theatre’s production of “Fun Home,” with wonderful acting and superb vocals and music behind an exceptionally well-executed script is one not to miss!