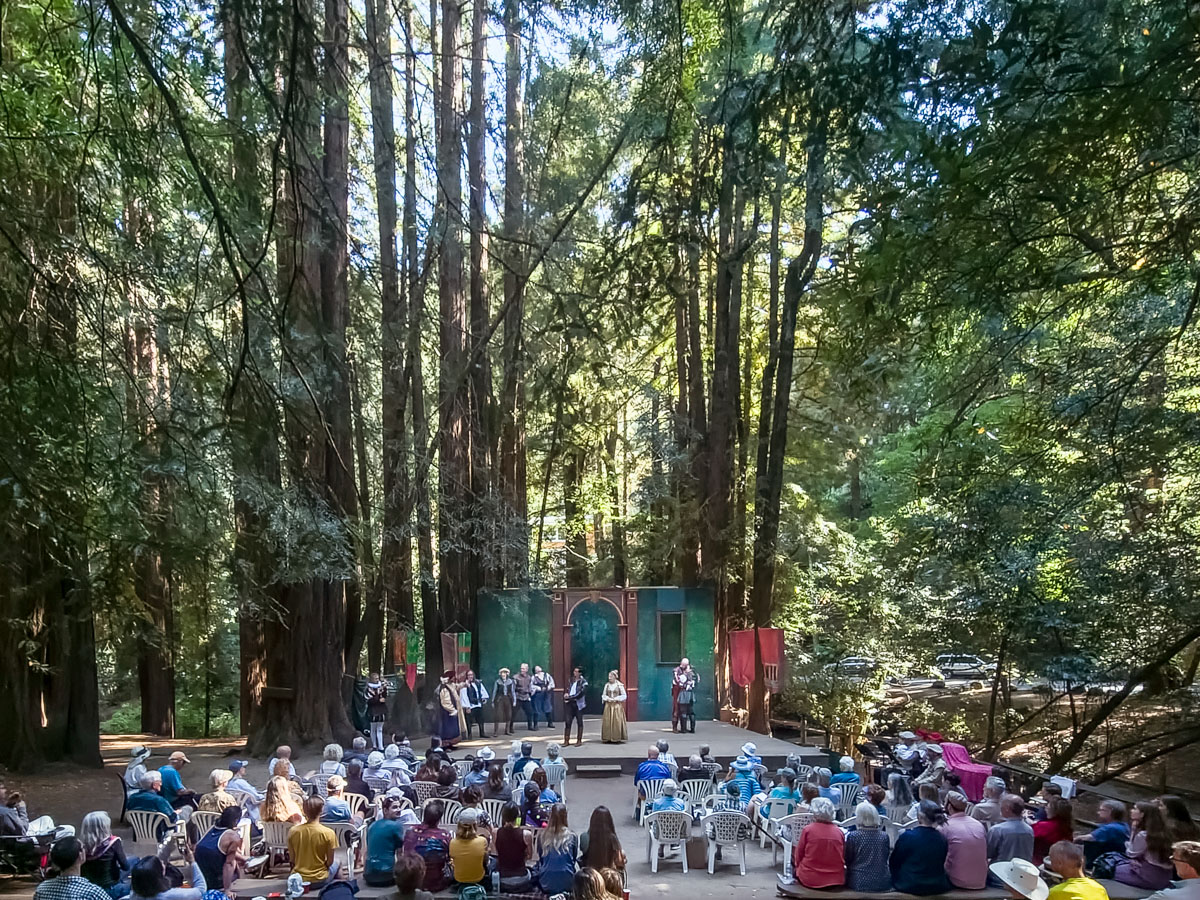 If Shakespeare’s plays have sometimes seemed confusing, with multiple characters speaking patois poetry and cross dressing, fear not. “Two Gentlemen of Verona” is one of the Bard’s early plays and has a believable plot, with only one actor disguising herself as a male.

Director Steve Beecroft worked for over a year on the play, writing in lines to bolster the motivation and beef up the characters’ actions. He did a solid job, as this play is both emotional and amusing, dark and light, with jealousy and forgiveness. And swordplay. Lots of swordplay. 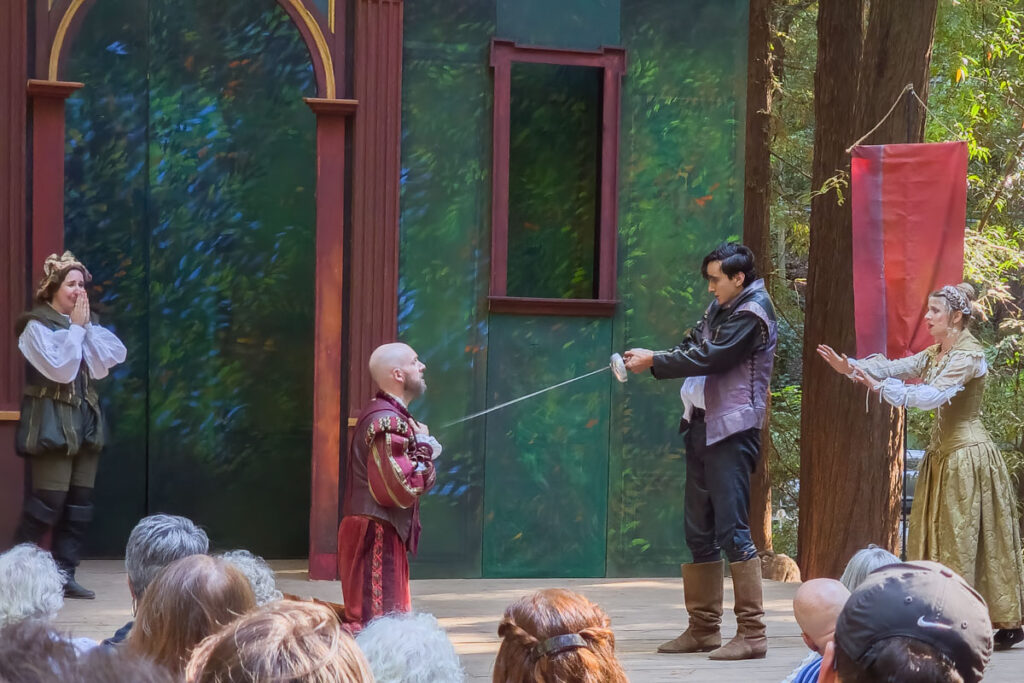 “Two Gentlemen of Verona” opens as two friends joke and joust as young men in 1593 were wont to do. Proteus (handsome and confident Nelson Brown) has a lady, Julia (expertly acted by Isabelle Grimm), to whom he has sworn his love, and she to him. His buddy Valentine has no girlfriend, so he bids them “ciao” and sets out to neighboring Milan. It doesn’t take long for Valentine, enacted by a dashing and charming Nic Moore, to hook up with lovely Sylvia, an aristocratic and clever young lady regally played by Gillian Eichenberger. They plight (pledge) their troth, which is to say they really dig each other.

“They plight their troth, which is to say they really dig each other.”

Back in Verona, Proteus’s exasperated dad (channeled by Mark Shepard) boots Proteus off the couch and out of the family villa and shuttles him off to Milan. He meets up with Valentine, spots Sylvia, and suddenly he’s in love and forgets about Julia. Dramaturg Peter Bradbury succinctly points out “Proteus is named after the shape-shifting god of change.”

Sylvia will have none of Proteus, as she is true to Valentine. After all, she plighted her troth with Valentine. Spurned Proteus learns about his buddy’s plan to elope with Sylvia. He rats on Valentine to Sylvia’s daddy the Duke (a regal Glenn Havlan). Valentine is banished. Sylvia is mightily peeved, particularly when Proteus keeps pestering her, professing his love. Julia, smelling a rat, heads to Milan and disguises herself to watch her paramour’s antics in the forest. She gets the drift. The rest, as they say, shall be revealed in Act II.

No review of “Two Gentlemen” would be complete without commenting on the scene-stealing antics of Grey Wolf as Launce, a forest wanderer, and his dog. This particular dog is the hilarious Jamin Jollo; he plays the part on all fours and scratches and slobbers at will. The giggling of the children in the audience when he appears is the true testimonial of this actor’s over-the-top performance. 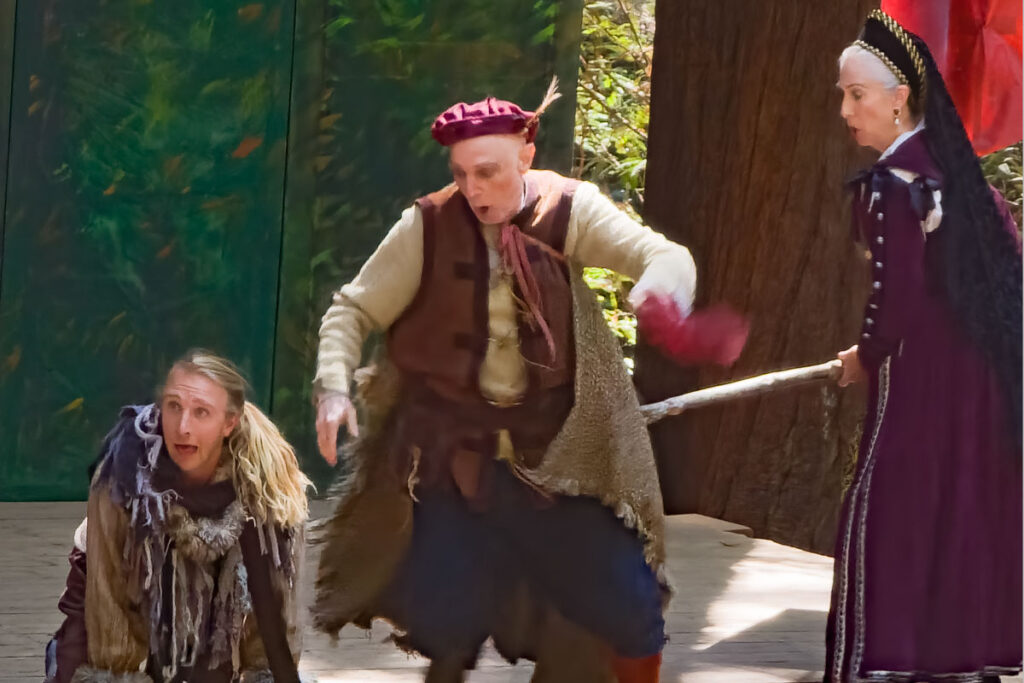 It is another scene-stealing surprise when Jollo shows up as Sir Thurio, one of Sylvia’s swishy suitors and a definite swipe left on Tinder. They are backed up by a talented cast of servants and outlaws, in a grove of stately redwoods reaching high above the fun.

…backed up by a talented cast of servants and outlaws, in a grove of stately redwoods reaching high above the fun.

The Curtain Theatre has no curtain, and their theatre is the Old Mill Park Amphitheatre, behind the Mill Valley Library on Throckmorton. Their productions are open to all at no charge, donations are most welcome, and chairs are set out in the glen, first come first served. The audience is filled with families, blankets, chairs, and picnics. It’s endearing to see the children enraptured by Shakespeare’s legacy. They get it!

Playing at 2 PM Saturdays and Sundays and through Labor Day Monday September 5th. Admission is FREE and donations are happily appreciated. Open seating, picnics welcome, cookies and coffee available for purchase, and chairs are provided on a first-come basis, or bring your own. Dress in layers as this redwood grove is always much cooler than the street level. 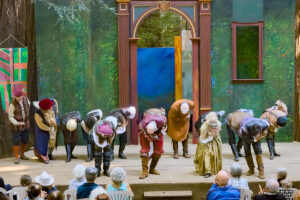 And, psssst..…If you’d like a sneak peek at this amazing work, try this video on You Tube:  https://youtu.be/JBCCpfpd368