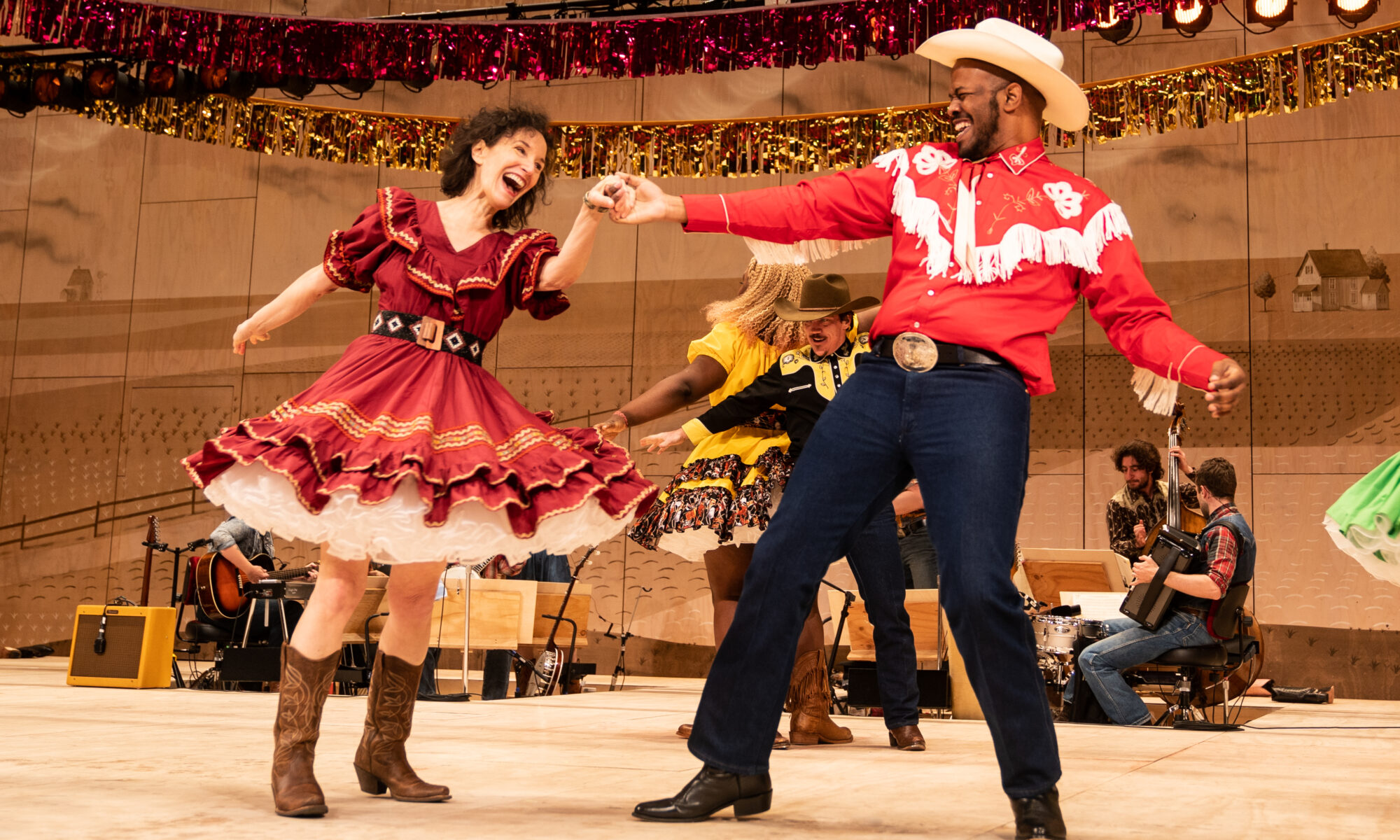 Rodgers and Hammerstein’s “Oklahoma!” must have been a deeply traumatic event in the young life of director Daniel Fish.

Entering the theater, the audience squinted into a broad bank of harsh bright lights from high above the stage, perhaps a forewarning that they were about to undergo psychological torment of the type dished out to political prisoners. Below these lights lay the set for the entire production: a huge open room filled with rows of picnic tables and walls festooned with mounted guns—dozens of rifles and shotguns, implying that the space is possibly a hunting club, but also perhaps the rec room of a church, or a school cafeteria. It’s community meeting space with lots and lots of guns.

Gun culture is established early in the show—this is Oklahoma, of course—and despite the story’s lack of gunplay, it provides thematic background throughout a nearly three hour performance. Russian novelist/playwright Anton Chekhov famously commented “If there’s a gun hanging on the wall in act one . . . you must fire the gun by act three,” advice clearly followed by Fish in his rewriting of the show’s closing moments.

In the opening scene we meet most of the pertinent characters near the town of Claremore, Oklahoma Territory, all presided over by matriarch Aunt Eller (Barbara Walsh). This introduction closely adheres to Hammerstein’s original, with cowboy Curly (Sean Grandillo) accompanying himself on guitar while singing “Oh, What a Beautiful Morning.” We meet Laurey (Sasha Hutchings), the girl of his dreams, and Jud Fry (Christopher Bannon), village idiot and Curly’s rival for Laurey, goofy adventurer Will (Hennesey Winkler) and pivotal comic-relief character Ado Annie (Sis), the “girl who cain’t say no.” They’re mostly in fine voice, especially Sis, blessed with superb comic timing and a powerful contralto. The Laurey/Curly duet “People Will Say We’re in Love” is delightful.

But our short stay in traditional romantic musical territory is abruptly ended by a lengthy blackout scene in which Curly and Jud have a man-to-man discussion. The blackout is as annoying and unjustifiable as the airfield landing lights that illuminate the theater on entering, and is inexplicably repeated in the second act. If one long blackout wasn’t enough, how about two or three?

The original production featured a “dream ballet” in which Laurey tries to sort out her feelings for Curly and Jud. That’s been jettisoned for a solo modern dance routine done to a high-intensity heavy-metal medley of “Oklahoma!” tunes, in the midst of more stage smoke than ever obscured a 1980s rock concert.

Clad in an oversized T–shirt emblazoned with the words “Dream Baby Dream,” dancer Jordan Wynn performs well even if John Heginbotham’s choreography bears no relationship to 1906 Oklahoma, or to the rest of the show. It’s also Wynn’s only appearance. Benj Mirman does a nice turn as Ali Hakim, the “Persian” peddler, as does Mitch Tebo as local jurist Andrew Carnes. The production’s dozen or so musicians are excellent, and the show’s actors overall are very good.

As done originally, both stage and film, “Oklahoma!” is a lightweight musical hampered by a weak story—its weakness forgivable because great music carries the show. Fish makes the too-obvious mistake of trying to push “Oklahoma!” into dramatic territory that would have appalled both its authors and previous generations of musical theater fans.

In the original, Jud appears in the penultimate scene at the wedding of Laurey and Curly. He’s drunk and belligerent, provokes a fistfight with Curly, then dies after falling on his own knife—an accidental death. In Fish’s version, he arrives stone cold sober, with a wedding gift for Curly: a revolver whose grip he puts in Curly’s hands. He provokes the inevitable single shot that kills him, and the blood-spattered newlyweds then sing the “Oklahoma!” anthem as off-key and ironically as possible. It’s an intentional abomination.

This “Oklahoma!” is little more than a protracted, self-indulgent exercise in millennial irony. Professional tastemakers in New York and elsewhere may have gushed about its brilliance, but bear in mind that they also considered “Guards at the Taj” a delightful little comedy, “The Humans,” an insightful depiction of family dynamics, “Dance Nation” a revelation about adolescent girls, and “Next to Normal” a fun romp through the minefield of drug addiction and delusional behavior. God save us.

There are certain theatrical icons that should be off-limits to reinterpretation. Fish’s “Oklahoma!” neither honors the original nor does it provide any degree of satisfaction for an audience eager to leave the theater with songs in their hearts. Instead they go home sorry that they paid to be insulted.