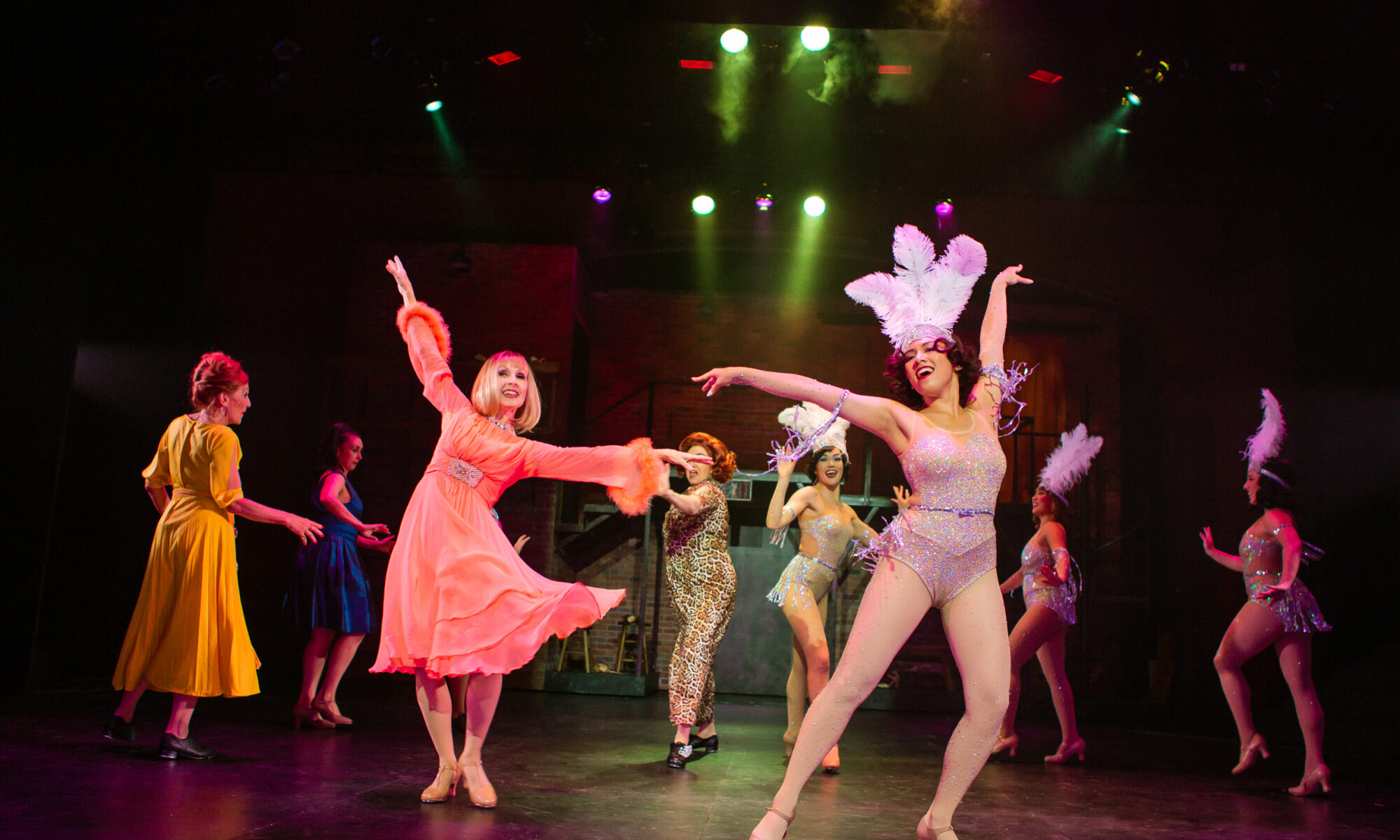 During her 1987 West End performance, Eartha Kitt sparked a comeback and went on to perform her own one-woman show to sold-out houses after “Follies” closed. Several songs from the show—“Broadway Baby,” “I’m Still Here,” “Losing My Mind”—have become standards.

The latest version of “Follies” arrived at the San Francisco Playhouse July 20, after five years in development and delays due to Covid. The show had never been performed in its entirety by a professional troupe in The City, according to director Bill English, also co-designer of the show’s imposing set and projections with Heather Kenyon.

Set as a reunion of past performers of the “Weismann’s Follies,” (a musical revue based on the Ziegfeld Follies, that played in that theater between the world wars) in a soon-to-be-demolished Broadway theater, the show focuses on two mature married couples at the reunion: Buddy and Sally (Anthony Rollins-Mullens and Natascia Diaz, respectively) and Ben and Phyllis (Chris Vettel and Maureen McVerry, respectively).

Sally and Phyllis were once showgirls in the Follies; both marriages are in trouble. Ghosts of former showgirls as youngsters glide through the crumbling theater without being seen by the revelers. Thus begins a series of musical numbers performed by the Follies’ many veterans, exploring their lives and desires, while “invisible” younger performers mirror them in counterpoint. Other ghosts from former shows appear and the characters try to recapture their youth in re-creations of past performances.

Spirited, emotional and touching musical numbers performed by a perfectly-cast blend of seasoned professionals and talened newcomers fill this production with energy and verve, as do many lively and dynamic dance routines.

While the book by James Goldman is thin on plot, as one of the show’s characters opines: “Facts never interest me, what matters is the song!” Originally a one-act show, “Follies” was later expanded into two acts. Ben Brantley of The New York Times wrote: “It wasn’t until the second act that I fell in love all over again with ‘Follies’.” This reviewer concurs.

As with several Sondheim shows, the second act is often “where the beef is.” The second act of “Follies” is wildly divergent from the first, as in “Sunday in the Park with George” and “Into the Woods.” In “Follies,” the first act is primarily the introduction of characters and their back-stories. It’s a lot of exposition in the midst of glittering showgirls and assorted middle-aged matrons at the reunion party. Either by design or possibly due to opening-night nerves, act one got off to a stilted start, making the second act all the more spectacular.

In the ‘Loveland’ scene, (“the place where lovers are always young and beautiful, and everyone lives only for love”), Sally, Phyllis, Ben and Buddy, perform in a dream-like pastiche of vaudeville-style numbers in which each acts out their own particular folly.

The scene culminates in total hysteria, as the characters reveal their true emotions for all to see, before returning to the theater, the end of the reunion and the rest of their lives.

A long odyssey for SF Playhouse, “Follies” is an enormous undertaking for any theater company, requiring a large cast of triple-threat performers. The late critic Martin Gottfried wrote: “Follies is truly awesome and, if it is not consistently good, it is always great.”