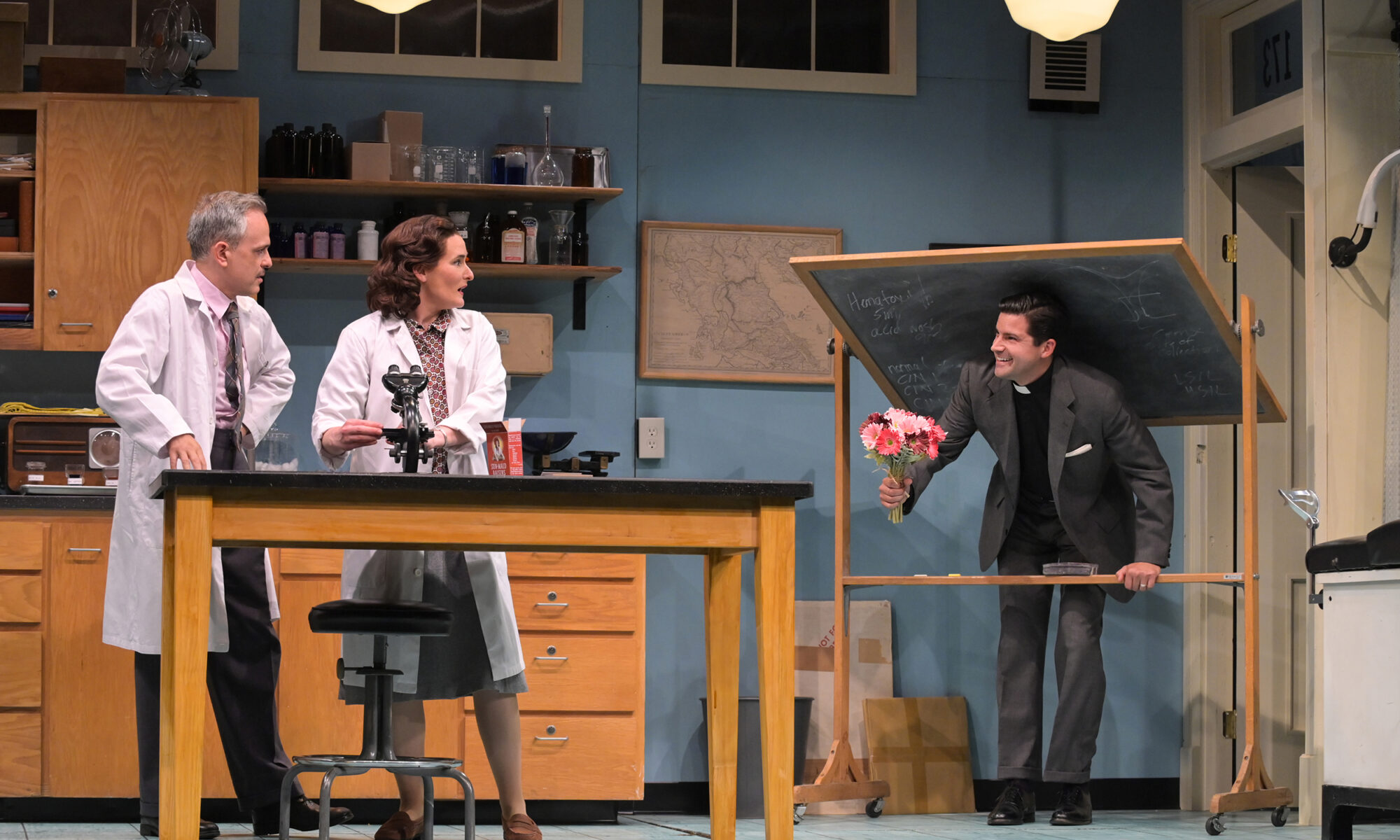 The two-hour drive from the Russian River to the Lucie Stern Theatre in Palo Alto proved to be more than worth the time to attend TheatreWorks’ world premier of Jessica Dickey’s remarkable “Nan and the Lower Body,” directed by Giovanna Sardelli.

Via a poignantly serendipitous series of circumstance, the production, which on the surface deals with women’s reproductive health, but at heart deals with every woman’s worth and right to be recognized as a human being, was originally scheduled to premier in 2020 but, due to the worldwide pandemic, was rescheduled for release a mere three weeks after what Dicky terms “this travesty; the overturning of Roe v. Wade.”

…a timely catalyst for deep reflection about the journey of women…

Dickey performs somewhat of a magic trick, successfully using both pathos and humor to express the urgency and maddening frustration of a midcentury medical system that ignored the number one cause of death in women (cervical cancer) due in large part to the discomfort of doctors and scientists in separating female anatomy from female sexuality.

Arriving in the US in 1913, Greek immigrant Dr. George Papanicolaou (skillfully played by Christopher Daftsios) toiled tirelessly for decades to develop and promulgate the use of the Pap Smear, allowing detection of cancers via analysis of cells found in women’s vaginal secretions.

Here, conceived as a jocular over-sharer and passionate champion of women’s rights, he exhorts all he meets to “call me Dr. Pap,” and enjoys frequent use of the word “vagina” to create discomfort in and shorten interactions with those who have interrupted his work. By contrast, in a deeply powerful scene, Pap’s face and gestures transform from angry frustration to compassionate tenderness as he gently places a series of unusable slides into the bottom of a garbage can, as if to honor the sacredness of the contents.

Nan’s character is based on Dickey’s maternal grandmother who became a cytologist. According to family lore, in 1952 she worked with Dr. Papanicolaou as a researcher, examining slides to ascertain the presence or absence of abnormal cells. Elissa Beth Stebbins’ Nan is a stolid woman determined to “do good” in the world both through the vehicle of her career and as a mother. Hired by Dr. Papanicolaou because of her insightful cover letter, outstanding academic performance and because she was “the only woman to apply,” Nan is secretly battling the baffling early stages of what will later prove to be multiple sclerosis.

In her first mainstage performance with TheatreWorks, Lisa Ramirez is compelling as Mache, Dr. Pap’s spouse, partner, former colleague, and test subject. Responding to her husband’s assertion that he knew she would be up to the task of being a doctor’s wife after seeing her bear an injury silently and without complaint, Mache momentarily cracks wide open as she admits that she remained silent because if she’d allowed herself to speak, she “would have sobbed.”

Jeffrey Brian Adams does a fine job as Nan’s husband, the minister Ted. In a riveting feminist discussion in which Dr. Pap asserts that women are superior to men because of the complexity and capabilities inherent in their anatomy, Ted insists that it is, paradoxically, essential for women to be seen simply as human beings if they are ever to be afforded the same rights and privileges as men. Ted points out that if women are seen to be “different,” they will continue to be subjected to separate rules.

The various settings of the play—a university lecture hall, research lab, living room, night-time exterior—are depicted in keeping with the period with no outstanding features other than the lab’s examining table with stirrups. This adherence to the expected affords a lack of distraction so we can focus on dialogue and interactions between characters. Stagecraft by Nina Ball is superb, with one set literally splitting open in the center – half gliding off stage right and the other half stage left, after which the next set glides forward in a seamless motion that set off a chorus of appreciative gasps from the audience.

The Lucie Stern Theatre is itself a treasure. Set within a lovely neighborhood, it’s warm and inviting, spacious and well laid-out, with not a bad seat in the house. The outer courtyard with benches offered a lovely setting for the after-show reception.

“Nan and the Lower Body” acts as a timely catalyst for deep reflection about the journey of women (and the men who try to truly see them). When viewed through the lens of contemporary events, it also reminds us that progress is not always linear and must never be taken for granted.