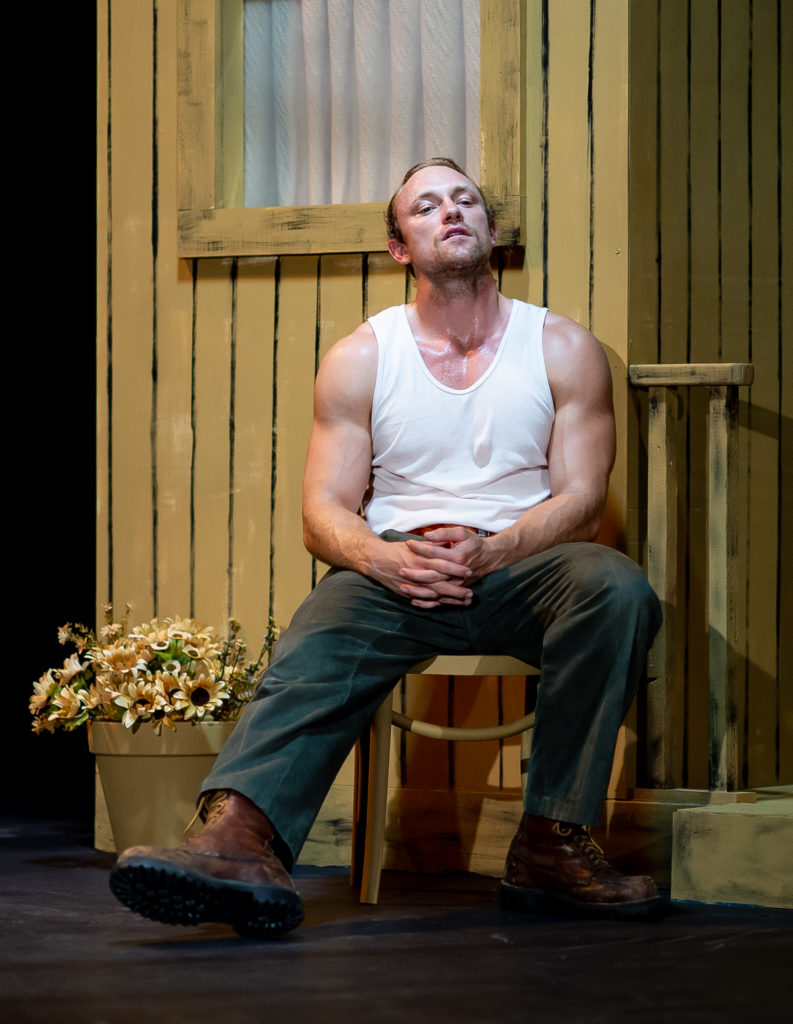 Ross Valley Players takes a brave jump from their usual lighthearted productions to bring the mid-century classic “Picnic” to the stage.

William Inge situated his 1953 Pulitzer-prize winning drama in a dusty Kansas town not far from the train tracks. “Picnic” is a period piece, a slow-moving unfolding of womenfolk who share a backyard and reveal their varied emotional shackles. Widow Helen Potts (veteran Tamar Cohn) has hired Hal, a hunky young drifter, to help her with chores. Hal possesses both animal magnetism and a body budding with muscles. Whenever Hal appears, perfectly portrayed by Max Carpenter, the febrile women bite their lips and sigh.

Helen’s next-door neighbor Flo is a controlling mother (superbly channeled by Tori Truss) who urges her pretty eldest daughter Madge to ensnare Alan (Evan Held), the town’s eligible bachelor. Madge acts compliant but is conflicted by her own perceived limitations. Dale Leonheart enacts her delicate role, balancing eagerness and wistfulness, all the while listening for the whistles of distant trains.

…“Picnic” is a period piece, a slow-moving unfolding of womenfolk who share a backyard and reveal their varied emotional shackles.

Flo pays scant attention to her studious tomboy daughter Millie, a role captured with youthful impatience by Lizzy Bies. Flo’s two daughters have a rivalry common to close-age siblings. Bies admirably remains in character throughout her performance, even when she has no lines onstage.

Into the backyard enters Rosemary (Valerie Weak), Flo’s house boarder, a prim and proper schoolteacher with buttoned up suit and perfectly aligned seamed stockings. Weak skillfully enacts this role, emphasizing Rosemary’s aloofness. From Act I to Act IV, Rosemary morphs from a self-proclaimed independent female to one desperate to get married. Her reasons for becoming so aren’t clear, but her need to get married propels the play’s secondary plot.

…Inge’s dramatic script is an edgy slice of life, and no picnic for the characters.

It’s not the only amusing scene in this drama, thanks to Steve Price in the role of Howard, Rosemary’s sweetheart. Price has the capacity to be a larger-than-life comedic presence, but he keeps it mostly real in this production. Howard cajoles the staid Rosemary to take a swig of his illegal booze. He shares his booty with eager Hal, and young Millie sneaks in a few swigs too. The combustion begins when one buzzed and desperate spinster wants to dance with a virile hunk.

RVP made a good choice choosing director Adrian Elfenbaum and adding two Equity actors to their cadre of talented local actors. RVP’s masterful casting choices secure the believability and success of this production. Elfenbaum’s direction keeps each character’s performance in balance with the ensemble.

Opening night had bits of hesitation with the actors’ lines, perhaps due to opening-night jitters, but that will surely dissipate. This period piece moves at a slow pace, and at two and a half hours might benefit by trimming a few scenes, but overall it’s a tremendous production.