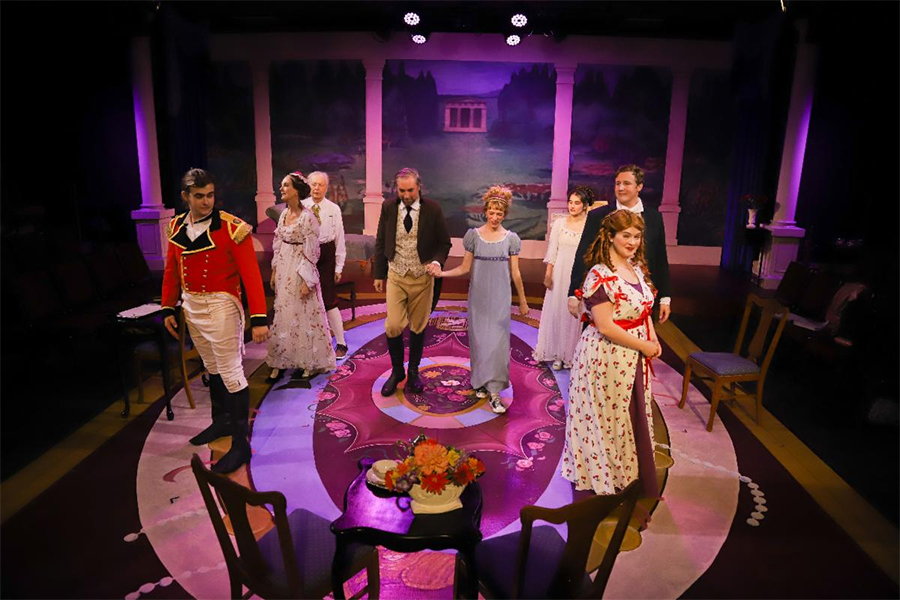 Step inside the 99-seat Monroe Stage black box theatre you’ve entered the drawing room of a 19th century English country manor. There’s a lovely scene behind the columns, reminiscent of a Maxfield Parrish painting. The floor has been transformed into a colorful faux-carpet, and there are touches of lace and lush drapery in the corners of the theatre.

The stage is set for “Pride and Prejudice,” an inventive adaptation by Kate Hamill of Jane Austen’s classic 1813 novel—an avant-garde production with contemporary costume touches mixed with period dresses and proper gentlemen’s coattails.

6th Street Playhouse chose to bring this nationally-recognized version to the Santa Rosa stage under the direction of Laura Downing-Lee. Opening night was sold out.

…the actors’ virtuosity and skill at their craft are apparent throughout this production.

The plot is driven by Mrs. Bennet, the rapacious mother of five daughters who must be married off to bring the family future prosperity. Enacted by stage veteran Kristine Ann Lowry, Mrs. Bennet brings laughter with her overbearing entreaties and dramatic entries and exits. The eldest daughter, Elizabeth, has sworn off love and marriage, secure in her denial of the existence of a perfect man. Neither her mother nor her sisters Jane (Lauren DePass) and Lydia (Sierra Dawn Downey) can persuade her otherwise.

Miranda Jane Williams infuses the pivotal role of Elizabeth with a precise accent, clearly enunciated for all to hear in this small ¾ round theatre. Some of her castmates could use better projection and accents, as their backs are frequently turned.

Those familiar with “Pride and Prejudice” know that when Mr. Darcy, portrayed by Matthew Cadigan as a wealthy aristocrat with proud class distinction, is introduced to Elizabeth, their conversation provokes an instant dislike between them. That is not the end of the story, but rather the spark which eventually ignites the beloved “happy ending.”

The cast has a blast with some over-the-top characterizations. Shifting roles, costumes, and genders in amusing combinations, the actors’ virtuosity and skill at their craft are apparent throughout this production.

Skyler King draws the first laughs as the oversized and beleaguered sister Mary, only to reappear in the next scene as amiable and handsome suitor Mr. Bingley. Lauren DePass plays quiet Jane and loopy Miss De Bourgh. Sierra Dawn Downey convincingly channels a bubbly and impetuous 14-year-old, then transforms into an imperious dowager in a later scene. Tim Hayes, the elder in the cast, swiftly changes from Mr. Bennet to re-emerge as a spinster cousin. It’s all very well done and great fun to watch.

The scene-stealer role in this “Pride and Prejudice” undoubtedly belongs to Elijah Pinkham, an actor with such skill at his craft that he is alternately the unctuous and hilarious reverend Mr. Collins, the sharp Lieutenant Wickham, and the haughty and disdainful Miss Bingley. He immerses himself into each role so deeply that he is unrecognizable.

The actors do this character switching repeatedly and seamlessly from all corners of the theatre, all the while moving stage furniture for the next scene. Bravo to all!

The book “Pride and Prejudice” has spawned many films, television programs, and stage adaptations, even including one with Zombies.

This 6th Street Playhouse production is fun, while retaining Austen’s moral of the story: prejudice defended merely by pride will lose out. It’s a lesson for today’s bellicose bias and attitudes. Shakespeare was correct: “All the world’s a stage.”

Note:  When you go, Artistic Director Jared Sakren is protective of everyone at 6th Street. All patrons must show proof of vaccination at the door and wear masks inside. While theatres have been caught short by Covid illness of cast members, Sakren discloses that every actor in “Pride and Prejudice” has an understudy ready to assist.