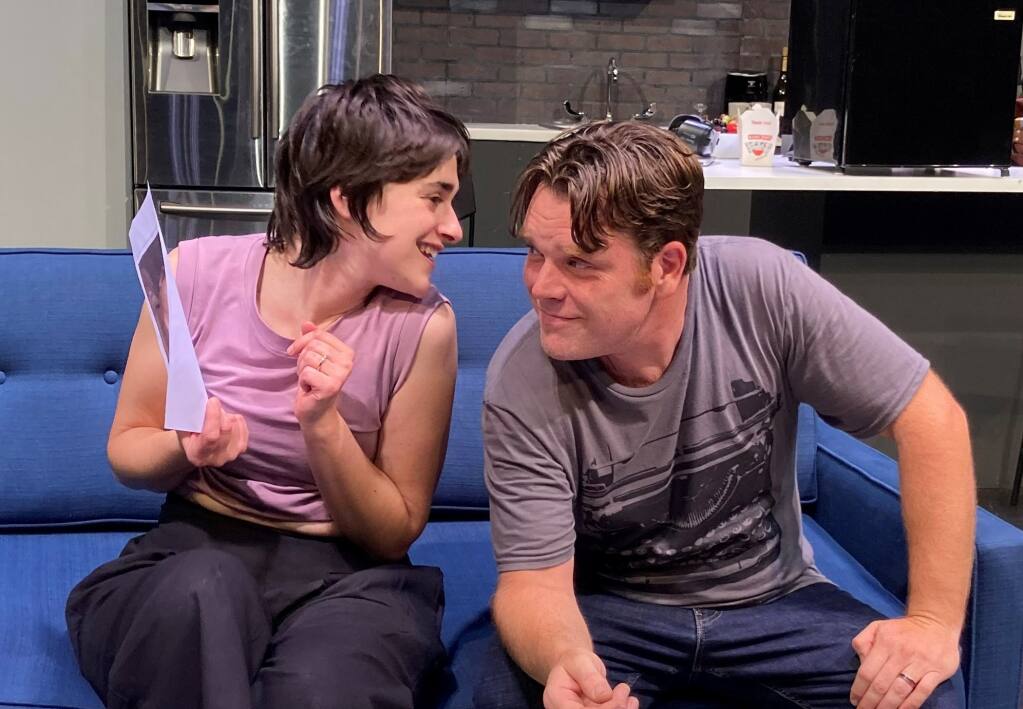 A technological house of horrors is both a comedic trap and an existential crisis for a young married couple in Deborah Yarchun’s “Atlas, the Lonely Gibbon” at Spreckels Performing Arts Center through August 28.

Taylor Diffenderfer shines as Irene, a journalist reduced to doing copy-edit work on stories generated by computer, and one so spooked by and hooked on technology that she frequently dons a virtual reality (VR) headset to escape.

…an amusing and well-done cautionary tale….

All the devices in her fully-integrated home refuse to follow orders that she barks at “Atona,” the unseen interface and controller in her sci-fi residence. The refrigerator coughs and sputters and dances madly. The lights flicker and fade at random. Even the house plants seem to have minds of their own. Both unbidden and in response, the home’s devices talk to her, often with incisive comments. Kevin Biordi and Julianne Bradbury animate and voice the machines.

Irene doesn’t get much help from husband David (Keith Baker), also a journalist who despite the prevalence of every imaginable connectivity at home, has to keep dashing out “to the office.” The revolt of the machines at home launches his system-wide upgrade, a cure that proves worse than the disease. Irene’s also got some sort of fixation on a large mate-seeking gibbon named “Atlas,” enacted by Baker. Bradbury does a nice bit late in the show as the probable mate.

It’s all very funny until, as John Craven described “The House of Yes” at Main Stage West, it’s not funny anymore. The story morphs into a showdown between husband and wife, with quite unfavorable implications for the future of their relationship.

It’s a circumstance that should prove immediately recognizable for anyone overwhelmed by the intrusion of technology into every aspect of daily life. “Atlas, the Lonely Gibbon” is an amusing and well-done cautionary tale about where all of this may lead.