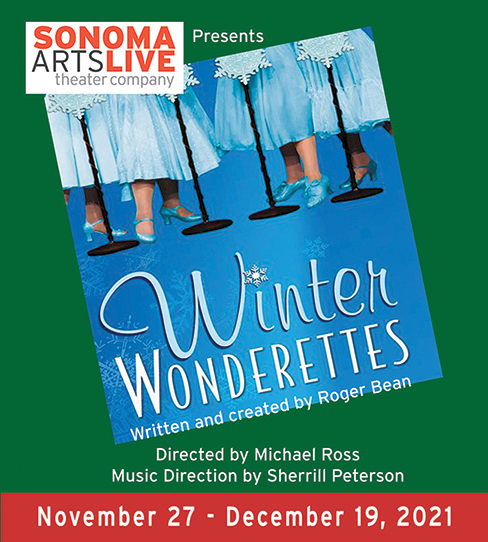 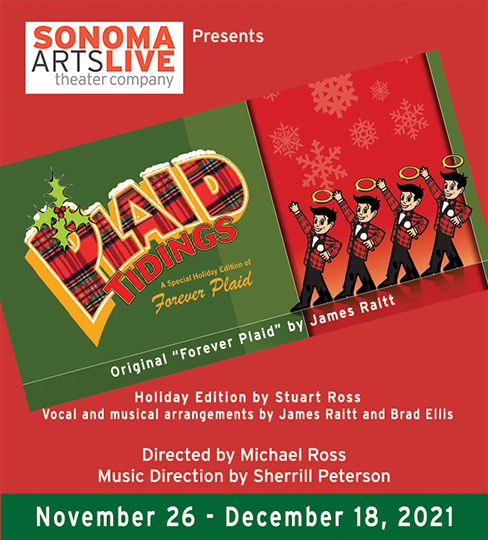 This time of year, theater companies can be counted on to offer up plenty of predictable Christmas classics.

Sonoma Arts Live has taken a contrarian tact with two similarly-themed shows directed by Michael Ross: “Plaid Tidings” and “Winter Wonderettes.” Performed on alternating dates, they’re both delightful tributes to the ubiquitous four-member vocal troupes of the 1950s and ‘60s.

The first, developed by Stuart Ross from the original “Forever Plaid” by James Raitt, features a male quartet that suffered an abrupt departure in an auto accident but who have been reincarnated for the holidays.

Named for their trademark plaid jackets, the four crooners may enjoy an extension of their reincarnation if they perform well enough—quite a motivation, one that propels them through two high-energy hours of comedic antics, impressive dancing, and tremendous vocalizing. Trevor Hoffman, Andrew Smith, Scottie Woodard, and Brian Watson appear respectively as Jinx, Frankie, Sparky, and Smudge.

Julianne Bradbury, Sarah Lundstrom, Maeve Smith, and Jenny Veilleux are all convincing and very funny in the roles of Cindy Lou, Betty Jean, Suzy, and Missy, respectively, all of them with lovely voices and great comic timing. Both casts are very well balanced—as actors, dancers, and singers—backed by a solid band under the direction of Sherrill Peterson.

Scottie Woodard served as choreographer for both shows—“Plaid Tidings” being the more reckless of the two, in keeping with the male tradition of risk-taking for its own sake. “Wonderettes,” by contrast, offers a more demure presentation but one that’s more satisfying musically.

Both shows make the most of a simple set on the Rotary Stage at Andrews Hall. While “Wonderettes” is more structurally complete and better rehearsed, “Plaid Tidings” has an untamed quality that makes it equally compelling.

Best bet: See both productions back-to-back. An ideal performance would feature both groups onstage together. That’s not likely to happen, but we can dream, can’t we?