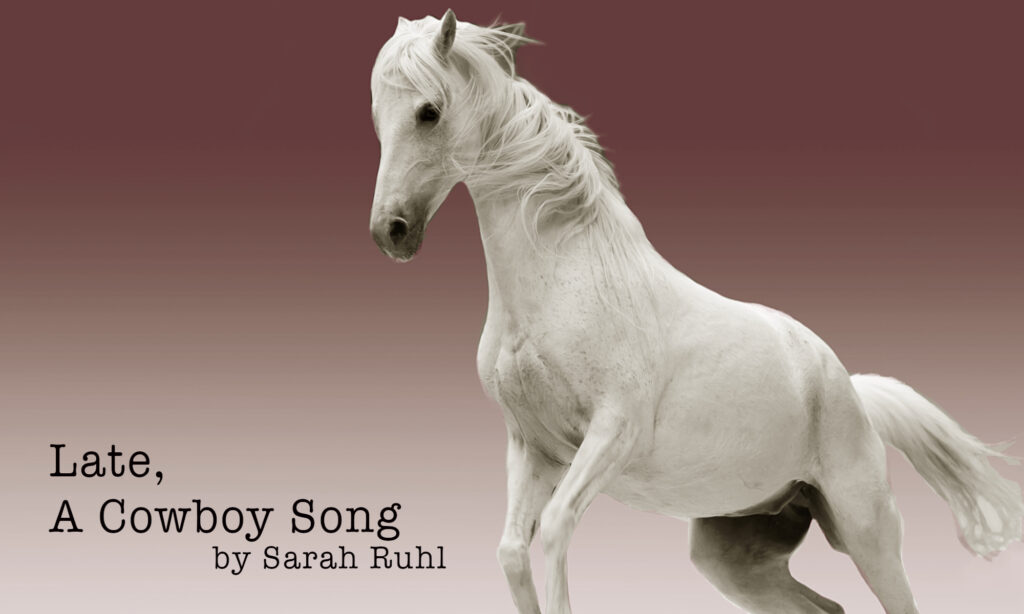 Main Stage West has an enviable record of expertly-selected and beautifully-performed productions. In recent memory are astounding, gorgeously-rendered shows such as “The House of Yes,” “Lungs,” “Blackbird,” “After Miss Julie,” and “Heathen Valley,” all of them given glowing reviews here.

Against this impressive background, there’s little to explain the oddity that is “Late, A Cowboy Song,” in the cozy theater on Sebastopol’s Main Street through December 18. Reputedly one of playwright Sarah Ruhl’s early efforts, “Late” features three North Bay talents, under the direction of Missy Weaver, trying to make something significant from what’s not much more than a collection of semi-related sketches from Ruhl’s notebook.

…there’s nothing funny about it, other than the fact that an MSW play-reading committee decided it was worth developing.

A description lifted from the MSW site: Mary, always late and always married, meets a lady cowboy outside the city limits of Pittsburgh who teaches her how to ride a horse. Mary’s husband, Crick, buys a painting with the last of their savings. Mary and Crick have a baby, but they can’t decide on the baby’s name, or the baby’s gender. A story of one woman’s education and her search to find true love outside the box.

More: Crick (Jeff Coté) is an unemployed stay-at-home husband who cooks for Mary (Sharia Pierce)—even though she seldom comes home for dinner on time—flirts and bickers with her, and finally caves into her demands that he get a job. Their relationship is pointless, their finances are thin, and their living conditions are rough. Mary finds solace with a friend named Red (Nancy Prebilich), a self-styled guitar-playing, horse-riding “lady cowboy.” Having a baby only compounds the problems in her marriage, and Mary ultimately rides off into the western Pennsylvania sunset with Red. The end.

I am not giving too much away by revealing this. Not a single problem In the Crick-and-Mary household gets solved and there’s not enough in Mary’s pleasant encounters with Red to justify abandoning her marriage, but that’s the tale as delivered. Somewhere I saw a promotional blurb hyping the show as “a comedy” but there’s nothing funny about it, other than the fact that an MSW play-reading committee decided it was worth developing. Mostly it’s a lot of bickering, confusion, and alienation punctuated by a few tender moments until it all comes to a merciful halt. 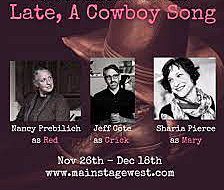 The dramatic arc of “Late” is shallow at best, and Mary has the only discernible character arc. Sarah Ruhl can be a tremendously engaging playwright who favors throwing in bits of magical realism—see for example, “How to Transcend a Happy Marriage,” that played recently to full houses at Santa Rosa’s Left Edge Theatre. “Late” attempts magical realism too—set designer David Lear’s horse being the best example.

Coté, Pierce, and Preblich try mightily with what they’ve been given, but saturation irony simply isn’t a strong enough foundation on which to build a play that will sustain an audience through ninety non-stop minutes. Ruhl has penned many compelling plays. Regrettably, “Late, A Cowboy Song” isn’t one of them.