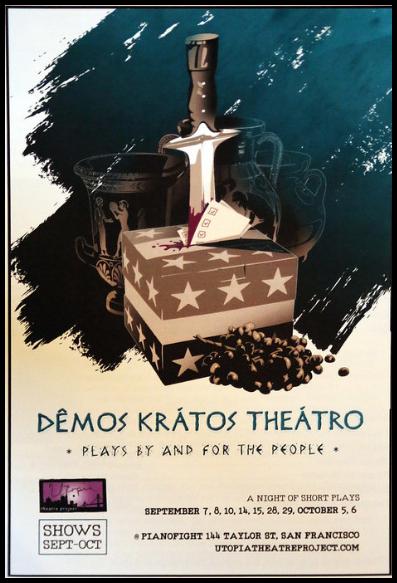 Its title Greek for “People Power Theater,” this collection of short plays and comedic sketches includes plenty of predictable anti-Trump/anti-Republican polemics. Musician Lauren Mayer appears repeatedly with songs whose lyrics are sometimes clever and sometimes entirely too obvious, such as “voter fraud is a fraud.”

There’s one piece, “Daughters of Ocean,” by Carol S. Lashof, that’s either too obscure or not quite fully developed, but two others are excellent, especially “The Polling Place,” Kenneth Heaton’s two-actor sketch about a voter trying her earnest best to participate in democracy in the face of increasingly impossible requirements. Directed by Mary Ann Rogers, veteran professional actor Richard Farrell is superb as a no-nonsense worker enforcing the rules at a polling station. Alicia Stamps is his match as a would-be voter baffled by the obstacle course she must overcome simply to cast a ballot.

Amelia Adams … a trained clown with deep experience in the Commedia dell’Arte tradition … engages the audience fully and never falters.

Another great sketch is Cleavon Smith’s “On the Precipice.” Directed by Melanie Bandera-Hess, the piece features three stoners (Lorenzo Angelo Gonzales, Howard Johnson Jr., and Tesia Bell) who appear ready to do their citizens’ duty until their motivation gets derailed by too much weed. The show’s only piece with a personal responsibility theme, “On the Precipice” is a humorous cautionary tale that should be taken to heart by a wide swath of the politically disenchanted.

The high point of “Demos Kratos Theatro” is Amelia Adams’s recurring appearances as campaigning politician Sal Monella—a sleazeball self-promoter from New Jersey by way of Chicago. A trained clown with deep experience in the Commedia dell’Arte tradition, Adams engages the audience fully and never falters even at moments when it’s clear she’s improvising. Her hilarious act alone is worth the trip to Taylor Street.