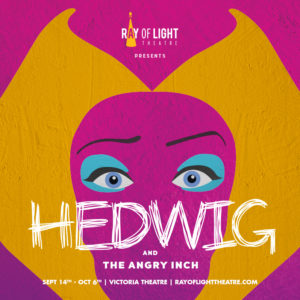 John Cameron Mitchell’s “Hedwig and the Angry Inch” may be the greatest rock musical ever conceived. No matter how you rank them, it’s certainly among the top five. Ray of Light has launched a really engaging production of this fantastic comedic redemption story about an East German rocker whose botched gender-reassignment surgery prompts personal and professional crises.

At the Victoria Theatre in the Mission district through October 6, the production features Coleton Schmitto in the lead role, with Maya Michal Sherer as Yitzhak, Hedwig’s aide-de-camp, fellow performer, and sometimes lover. Hedwig’s band, the Angry Inch—its name derived from what was left by Hedwig’s incompetent surgeon—includes Steven Bolinger on keyboard and guitar, Lysol Tony-Romeo on bass, Diogo Zavadzki on guitar, and David Walker on drums. The group is very well balanced and just loose enough to give this show a semi-inebriated improvisational feel.

…this “Hedwig” is refreshingly street-funky…

Peet Cocke’s rough set perfectly complements the shabby old Victoria, giving it the air of both dive bar and low-budget arena. Schmitto dominates the stage throughout the non-stop ninety-minute show, spouting a litany of ironic one-liners and managing all of his character’s dance moves and gymnastics without being visibly hindered by stiletto heeled boots. Sherer scrambles to sing and draw projected transparencies at the same time. It’s quite a juggling act.

The pair sing with power and conviction, although the sound on opening night was so unbalanced that during opening scenes, the bass and drums overwhelmed the vocals. This technical glitch was corrected later in the show and presumably won’t be an issue for the duration of its run. Stephen Trask’s music, of course, runs the gamut from incendiary punk (“Angry Inch”) to pop humor (“Sugar Daddy”) to deeply personal (“Wig in a Box”) to hauntingly sentimental (“The Origin of Love,” “Wicked Little Town”)—all of it beautifully performed.

Not an ultra-polished Broadway production, this “Hedwig” is refreshingly street-funky, refined enough for musical theater elitists but grungy enough that cultists will come back for repeat performances. Hardcore fans will regret missing it.