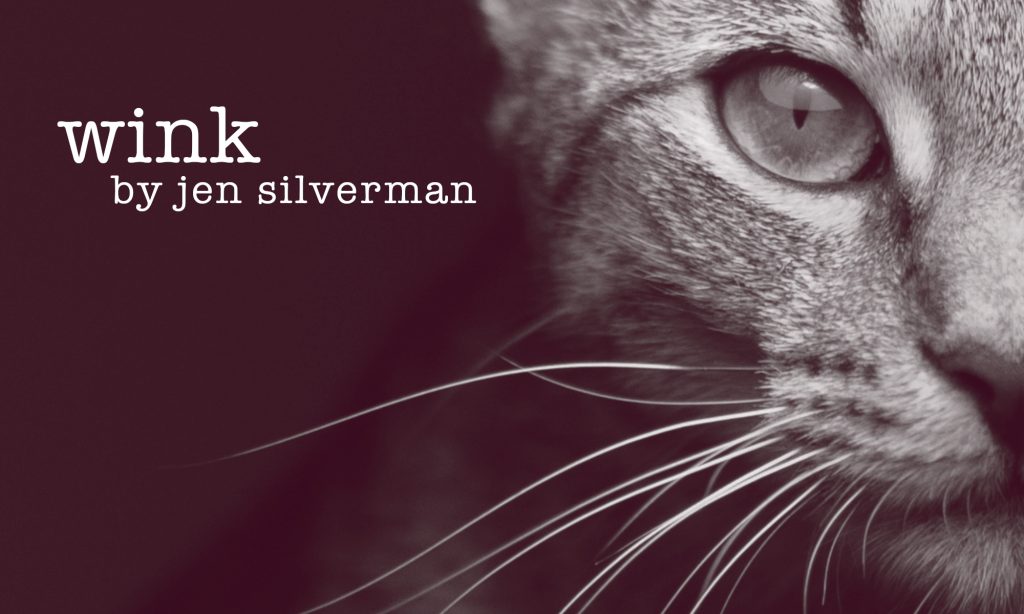 Despite having read a synopsis of Jen Silverman’s “Wink” before attending the opening night performance at Main Stage West in Sebastopol, I was utterly unprepared for the existential poignancy and laugh-out-loud dark absurdist farce that awaited me.

The titular character, a cat named Wink, has gone missing. Wink’s human, Sophie (masterfully played by Ilana Niernberger, among the North Bay’s most versatile actors) is distraught but can’t prompt any concern from husband Gregor (John Browning). He’s long resented the affection Sophie expressed toward the animal, while maintaining a physical and emotional distance between herself and Gregor.

The simple set by David Lear—predominately a loveseat and wingback chair—alternates as a therapist’s office and the protagonists’ living room. Early in the story, Sofie destroys the room in a moment of grief, rage and roiling impotence. The mess remains throughout ensuing scenes, allowing the audience to perceive an appropriate façade and inviting us into the magical realism pervading this astonishingly original, brilliantly executed story.

Sam Coughlin may well have been a cat in a previous life, proved by his seamless embodiment of Wink. During his first appearance, the undead feline, driven by hunger, has risen from the grave. Coughlin, in flesh-toned briefs, moves about the set with grace, unbridled confidence and nearly-naked sexuality. He leaps effortlessly from floor to sofa back to window, sometimes draping himself languorously over furniture or an open lap, or rubbing seductively against a piece of furniture or the nearest human body part.

John Browning is utterly convincing as repressed, gaslighting husband and probable cat killer Gregor. While posturing as dismissive and unconcerned, Browning’s Gregor briefly allows us to glimpse an underlying thoughtfulness and vulnerability that allow us a few moments of compassion for his otherwise reprehensible character. The best villains always have redeeming qualities. The ensemble is rounded out by an adroit Michael Fontaine as therapist Dr. Franz, who sees both Sophie and Gregor professionally, but individually, reminding them that depression and dissatisfaction are synonymous with the human condition and that the proper course of action is to accept and steadfastly maintain both conditions.

Playwright Jen Silverman’s use of sophisticated language adds to the humor as Sophie attempts to explain the wrecked living room to Gregor. She invents a terrorist named Roland who, she says, came into their home, tore it up and pushed her menacingly (and, judging by her reenactment of the imaginary scene, quite seductively) against a wall. When Gregor asks how Sophie knows the assailant’s name and occupation, she explains that he told her “In a letter” which he communicated via “semaphore” from the roof of a nearby home.

Absurdities pile one on the other as the play progresses. Bent on revenge against Gregor, Wink moves in with Dr. Franz. The two begin sharing nightcaps and flirtations. While at first frightened and somewhat repelled by Wink, Dr. Franz is soon smitten with the cat and begins to let go of his dictum that life is nothing but responsibility and drudgery.

In a playfully sexual scene, Wink encourages Franz to loosen up by showing him how to walk and stand like a cat, placing his paws on Franz’ hips, reminding him that he has hips and shoulders. In one of the most poignant scenes, Wink announces that he’s leaving because he refuses to allow himself to be “skinned twice.” Franz implores Wink to tell him, before he leaves, if he has any feelings at all for him. Wink responds by rubbing himself lovingly against Franz, clearly moved by the gesture.

As Dr. Franz begins to open up, Gregor is being swept down a maelstrom of rage and self-directed violence while, simultaneously, Sophie sheds her own persona, trading khakis and sneakers for black leather and combat boots, as she transforms herself into Roland in his over-the-top destructiveness and freedom from the constraints of civilized society. All three characters have taken unpredictable vectors thanks to Wink, who’s still out there somewhere, perhaps wreaking vengeance on another cat-hating egotist.

We might assume that one cat couldn’t have the power to upend the lives of three people, but that misgiving is put to rest in this 75-minute one-act directed by James Pelican. “Wink” sails along without a hitch toward a marvelously ambiguous conclusion—a truly enjoyable evening’s diversion.