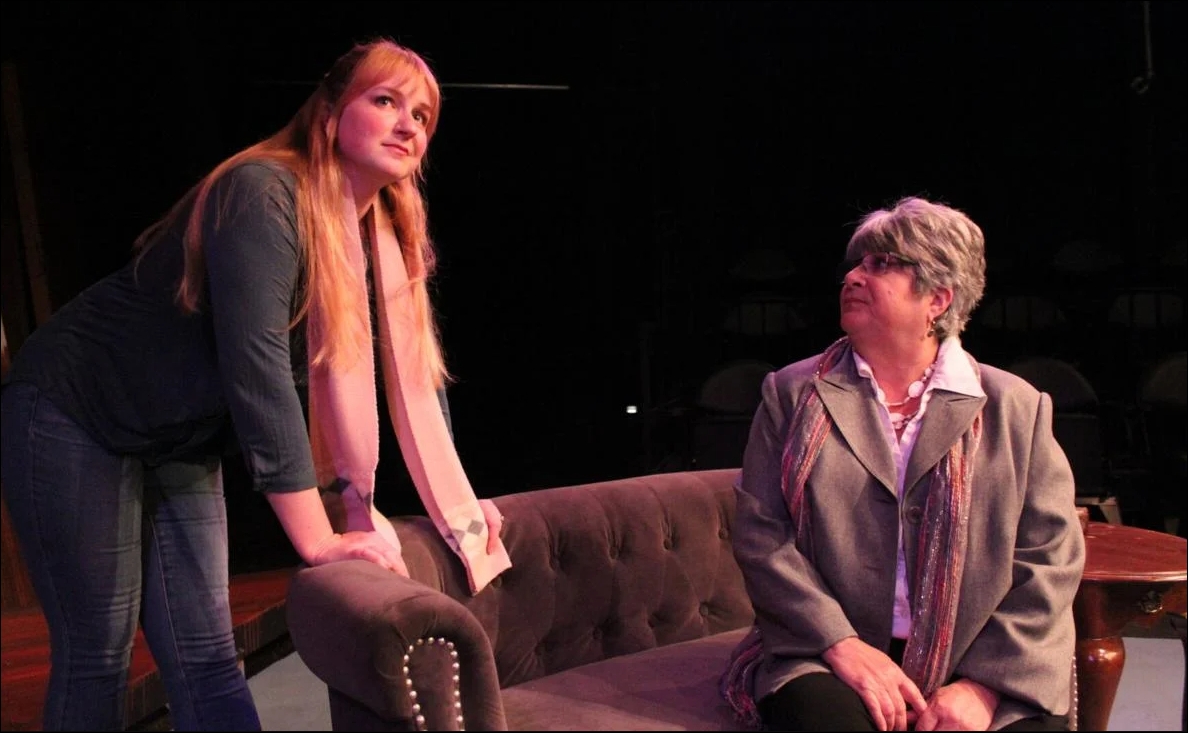 Two research biologists have an unexpected encounter in the run-up to a scientific conference in “The How and the Why,” at Napa’s Lucky Penny Productions through April 24.

Lucky Penny Associate Artist Karen Pinamaki stars as Zelda, a career evolutionary biologist involved in hosting the annual meeting of the National Organization of Research Biologists (NORB). A late applicant named Rachel (Heather Kellogg Baumann) comes to Zelda’s office to plead for a speaking slot at the conference, to defend her hypothesis that human females menstruate as form of protection against sperm cells, which she characterizes as “antigens.”

Her hypothesis has gotten plenty of pushback from the biology establishment, especially from men. She begs Zelda for a speaking slot, despite having reservations about some of her own conclusions and many misgivings about drawing the ire of conference attendees, some of whom have already bashed her for what they perceive as outlandish assumptions.

Lucky Penny deserves praise for producing such a thought-provoking play….

The two biologists argue their convictions passionately, but the story isn’t really about science, despite the seeming plausibility of both concepts, and despite the realistically-depicted rampant nitpicking, back-stabbing, petty bickering, and professional jealously that infect the scientific community.

Their real issue is that Rachel is Zelda’s biological daughter, given up for adoption when she was only six days old. She’s now 28, the same age Zelda was when she got pregnant. The moment when she enters Zelda’s office is the first time they’ve met as adults. They are both professional scientists, the epitome of rationality, and they try their best to remain above emotional outbursts, but the emotion comes through despite their efforts to contain it—resentment, betrayal, guilt, feelings of abandonment and diminished self-worth, the whole panoply of negativity that can affect both those given away by their birth parents and those who gave them away.

Pinamaki and Baumann tread this emotional minefield with great care and a growing sense of carelessness, which becomes more pronounced as their mutual familiarity improves. Written by TV writer Sarah Treem (“House of Cards” among many other credits) and directed by Dana Nelson Isaacs, it’s an impressive pas de deux performed mostly in Zelda’s office (set design by Taylor Bartolucci and Barry Martin) and later in a Boston dive bar.

The two performers are very well balanced and amazingly dynamic with material that here and there may veer too far in the technical direction for some viewers. But strip out the scientific stuff, expertly woven into Treem’s story, and you have a universal tale of long-estranged mother and daughter reuniting in adulthood and trying to make a go of it from there.

An old adage about science is that it’s very good about explaining how events occur, but not so good about why. This fundamental observation applies not only to hard-core objective reality but also to a whole range of human behaviors. “The How and the Why” is a fascinating examination of two people trying to make sense of something that may not ever be fully understood either by them or by professional therapists. Lucky Penny deserves praise for producing such a thought-provoking play.