Racism is an eternal condition of the human species. Xenophobia, tribalism, call it what you will, it continues to plague us today despite our self-congratulatory image as a modern, rational society.

In “Hold These Truths,” at San Francisco Playhouse through July 3, playwright Jeanne Sakata makes the universal personal with a tale of one Japanese-American’s effort to deal with an unjust sentence leveled against him for ignoring a curfew applied only to him and his fellow “Nisei,” (second-generation Japanese immigrants), all of them US citizens by virtue of having been born in this country. In Gordon Hirabayashi’s story, we also get a history lesson about how detention camps to house them were set up in western US states, the result of widespread fear following the attack on Pearl Harbor in December 1941.

President Franklin Delano Roosevelt was (and still is) considered one of the most socially conscious presidents of the 20th century, but his signing of Executive Order 9066 that established the camps was one of his most reprehensible acts, one that was challenged all the way to the Supreme Court, which upheld its legality in a split decision. The order was clearly motivated by racism, but Italian-Americans and German-Americans, two of the largest immigrant groups in the US, were also herded into camps and deprived of their fundamental rights.

Director Jeffrey Lo has coaxed a lovely recital from Tagatac…

In a ninety-minute-plus solo performance, Jomar Tagatac embodies both the young and mature Hirabayashi, encompassing his journey from college student to college professor, and celebrating his ultimate success in getting his conviction overturned, the result of an accidental discovery of his legal records by an academic colleague.

A veteran of many productions at SF Playhouse, Tagatac also acts the parts of members of Hirabayashi’s family, his friends, officials, police officers, judges, and many other characters in quick seamless character shifts, under a modestly-scaled but beautiful projected montage (design by Teddy Hulsker) of slowly varying flag motifs, old photographs, and historical documents, including the US Constitution, whose slogan “we hold these truths to be self-evident . . . that all men are created equal” remains an article of faith held by Hirabayashi throughout his life, despite many reasons to doubt it.

Tagatac expertly distinguishes all his characters from each other, and especially from the primary one, sometimes simply by changing his jacket or moving from one spot to another on the mostly-bare stage (set by Christopher Fitzer).

While “Hold These Truths” is a cautionary tale about how the law can be subverted, it’s not a horror story of oppression and violence, especially not in the context of the horrors that consumed much of the “civilized” world in the 1940s. Some of it is actually funny—having negotiated a 90-day sentence for his curfew violation, Hirabayashi has to report to a road crew in Arizona, and gets there by hitchhiking from Seattle, apparently without any trouble. When he arrives, the local sheriff doesn’t know what to do with him other than to suggest that he go to a movie in town, to a theater equipped with air conditioning. In addition, he succeeds in winning conscientious objector status thanks to having joined the Quakers. 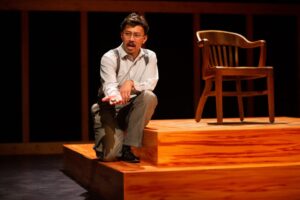 Director Jeffrey Lo has coaxed a lovely recital from Tagatac, who breezed through the press opener without a glitch. SF Playhouse was extremely cautious with this soft opener—all attendees had to present proof of vaccination, have their temperatures checked, agree to an affidavit stating their good health, and mop their hands with sanitizer before being admitted to the theater upstairs, where they were seated far apart but still asked to wear masks.

As of today (June 15) it’s unclear whether that policy will continue with the statewide lifting of pandemic precautions. In any case, “Hold These Truths” is a lovely performance and a welcome return to live, in-person theater. For those still reluctant to venture out, the show will also be available as an online streaming production.