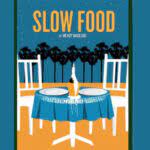 A late Sunday dinner at a Greek restaurant in Palm Springs becomes a comedic ordeal for a pair of vacationing middle-aged New Yorkers in Wendy Macleod’s “Slow Food” at Left Edge Theatre in Santa Rosa.

The show closed this past Sunday, June 13, after only a two-week run. Ordinarily, Aisle Seat Review wouldn’t cover such a limited engagement. But Left Edge deserves enormous credit for anticipating the June 15 statewide lifting of pandemic-related restrictions—and more for putting on such a lovely comedy, sorely needed after sixteen months of shutdown.

“Slow Food” featured Left Edge artistic director Argo Thompson in a rare acting appearance as Man, the male half of the vacationing couple, with Denise Elia-Yen as “Woman,” Man’s wife. David L. Yen stole the show as the curmudgeonly and uncooperative waiter, Stephen—“with an ffffffffff . . .,” he reminds his guests repeatedly.

The setup is simple: Man and Woman enter a restaurant near closing time, and rather than consuming the food and drink they desperately seek, they instead receive a load of guff from an opinionated server. The production plays out as an extended comedy sketch—small dramatic and character arcs counterbalanced by plenty of tension and shifting loyalties among the three performers, all stage veterans with decades of experience. Comfort in their roles was palpable for the limited-capacity audience, in what was clearly a testing-the-waters effort to emerge from the cocoon of COVID.

Macleod is a brilliant playwright—her outrageous funny, and unforgettably disturbing “The House of Yes” enjoyed a fantastic production at Main Stage West in December 2018. “Slow Food” doesn’t rise to such a pinnacle but is hilarious without the need for deep psychological nuance and unsavory revelations. Imagine a Saturday Night Live sketch stretched from six minutes to ninety, and you’ve got a pretty solid grasp of what “Slow Food” is all about—a lightweight, feel-good comedy without malevolent repercussions or imagery that might haunt you after the fact.

Left Edge Theatre’s published schedule for the coming year includes a slot for an undetermined production “To Be Announced.” Consider this a vote for reprising “Slow Food.” It’s that good, and with a few more performances could be even better.

ASR: Nor Cal Edition Executive Editor Barry Willis is a member of the American Theatre Critics Association and president of the SF Bay Area Theatre Critics Circle. Contact him at barry.m.willis@gmail.com