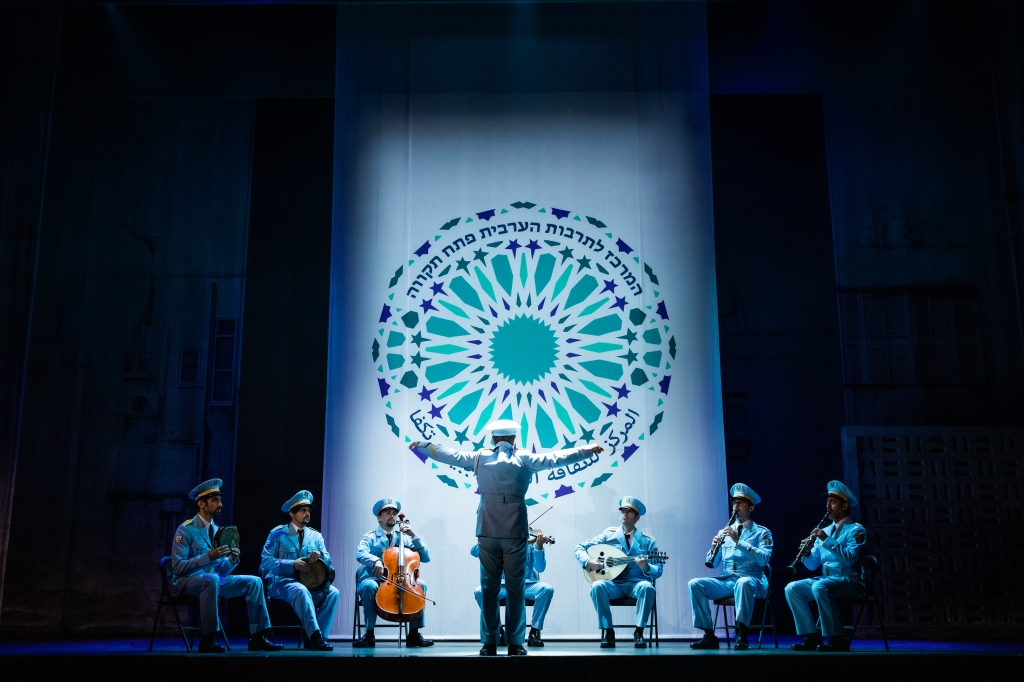 A mistaken destination leads to a night of small-scale magic for some Egyptian musicians and their accidental Israeli hosts in “The Band’s Visit,” at San Francisco’s Golden Gate Theatre through February 6.

It also leads to a night of big-time magic for theatergoers willing to brave the pandemic. Like every other socially responsible venue, the Golden Gate is adamant about checking vax status for all attendees and requiring masks during the show’s no-intermission 105 minutes.

This production is a risk worth taking: a simple story about ordinary people that rises far above the ordinary through a seamless blend of great writing, great music, great acting, and great stagecraft—among the many reasons why the show ran seemingly forever on Broadway and garnered 10 Tony awards.

You’ll leave the theater overjoyed for having been there but longing for more.

The time is 1996, forty-eight years after the Arab-Israeli War, a conflict not forgotten by either side. The setup is the arrival in a small Israeli desert town of the eight-member Alexandria Ceremonial Police Orchestra. Resplendent in pale blue uniforms, they’ve come to the wrong town due to misunderstanding its name—Bet Hatikva, not Petah Tikva, where they’re scheduled to perform at the Arab Cultural Center. There’s no bus to take them to their proper destination until the next day, and there’s no hotel in Bet Hatikva either, so they must rely on friendly locals for the night. In the process, potential adversaries get to know each other and discover that the same problems bedevil everyone regardless of religion or nationality.

Apart from the original mistake that launches the story, writer Itamar Moses doesn’t mine the obvious comedic ore of language barrier. Instead the Egyptians speak Arabic with each other, the Israeli speak Hebrew, and the two rely on heavily-accented and sometimes clumsy English as their lingua franca—all of it perfectly understandable to an American audience.

Set designer Scott Pask and lighting designer Tyler Micoleeau do their utmost to convey life in a dead-end town—both the heat and the hopelessness. (Cue the song “Welcome to Nowhere.”) The designers’ work, like the overall production itself, has rough-around-the-edges qualities that reinforce an abiding sense of realism. We may never visit the Negev Desert, but we certainly get a lingering taste.

The production’s realism is leavened with intervals of sheer magic—the band itself has moments of rehearsal that have the audience clamoring for more, and some of the songs are genius. Café owner Dina (Janet Dacal) befriends bandleader Twefiq (Sasson Gabay)—derisively called “the General” by a couple of Bet Hatikva locals—and sitting at a small table, she confesses how much she loved watching Egyptian movies on TV when she was young, a prelude to “Omar Sharif,” one of the show’s breakout hits. Twefiq in turn confesses his everlasting sorrow at losing his son and wife. Sweetness counterbalanced with regret tinged with hope—“The Band’s Visit” may have some of the most complex emotional undercurrents of any contemporary musical.

But it has moments of levity, too—Joe Joseph is outstanding as the seductive trumpeter Haled, who knows everything about his hero Chet Baker, right down to playing his riffs and singing in his voice. Joshua Grosso has the pitiable role of “Telephone Guy,” a Bet Hatikva resident who stands vigil all night at a pay phone hoping his former girlfriend will call. The Israelis and Egyptians discover commonality in their love of many kinds of music—Arabic, Klezmer, American jazz, while the seductive lure of the oud, cello, and clarinet continually remind us of the band’s reason for being.

Morning comes as it inevitably must, and the Alexandria Ceremonial Police Orchestra must say farewell to new friends. That we don’t get to enjoy their full concert is the show’s only disappointment. You’ll leave the theater overjoyed for having been there but longing for more.