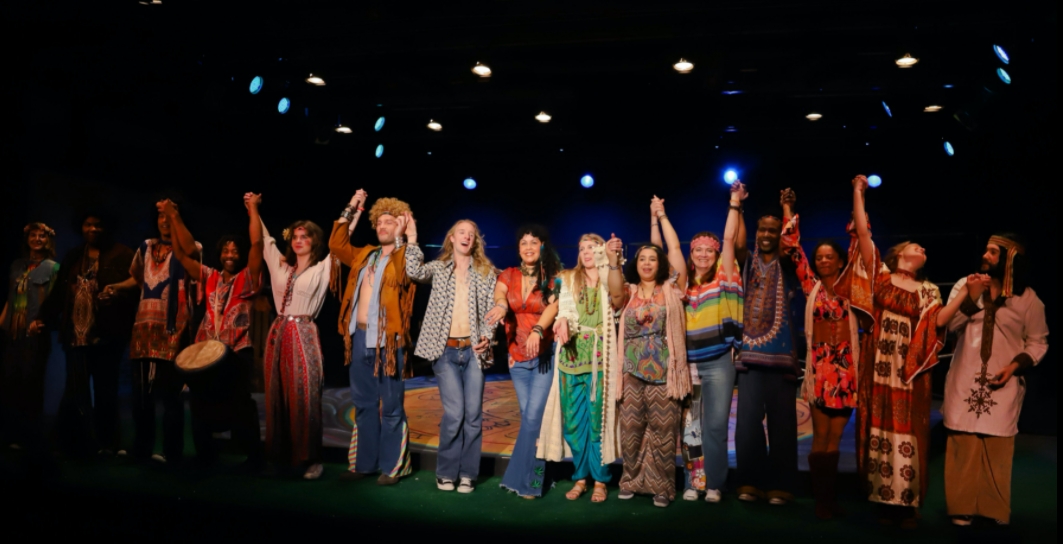 6th Street Playhouse in Santa Rosa took a brilliant risk in staging the rock musical “Hair.” From the moment one enters the theatre, one is surrounded by the exuberance of the hippie “Tribe” of actors cavorting onstage to drums. It’s clear this joyful “be-in” will be a performance like no other.

When “Hair” opened on Broadway 50 years ago, it broke every rule in the theatrical book. How did it become such a timeless musical? And how does it still capture audiences?

It has no real story line, plenty of four-letter words, a batch of rock ‘n’ roll songs strung together, and an in-your-face confrontation of the issues of race, the Vietnam War draft, sex, drugs, pollution, and clothing. It’s a brash bold and ballsy exploration of issues, many which still confront us today.

Whatever the magic formula, Director Aja Gianola-Norris brings this production of “Hair” over the top with a talented cast in fine frenzy, feathers, and fringe. Rachel Wynne’s choreography is vigorous and uninhibited, the onstage band under Lucas Sherman’s direction is spot on (although a bit loud for some of the solos), and the actors abound with strong voices.

Their physical performances are so impressive it would be no surprise if they lost weight after each performance.

“Hair” is a festival of fun, not to be missed…

Act I begins with a celebration of the extraordinary 1962 alignment of seven heavenly bodies (planets and the moon) in the constellation Aquarius. Time-tested favorites open with “Age of Aquarius” belted out by Serena Elize Flores. It’s followed by a dozen more, including “Hair,” “Hare Krishna,” and “Easy to Be Hard,” a solo soulfully sung by Gillian Eichenberger. The Tribe’s conflicts about the Vietnam War come to a head as some burn their draft cards. Others burn bras. Claude (an extremely acrobatic Jamin Jollo) and Berger (hilarious Ezra Hernandez) must decide their future paths in “Where Do I Go?” 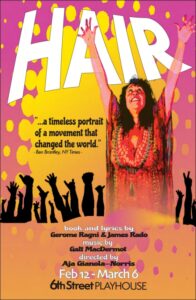 Act II consists mainly of the Tribes LSD trip. It’s a free-flowing dream sequence, a circus with bizarre bits and beads. Famous characters come and go. The Tribe freely partners up, uncouples, and mixes again against the backdrop of “Good Morning Starshine.”

When the finale “Let the Sunshine In” is sung, audience hands wave in a reflection of peace, love, and difficult choices. “Hair” is a festival of fun, not to be missed.

*** Covid restrictions at the 6th Street Playhouse require proof of vaccination and masks to be worn throughout the production. Some material may not be suitable for people under 16 years of age. Please see website for further advisories about this performance.