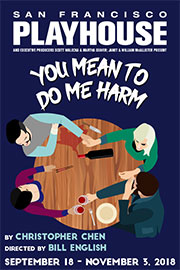 A seemingly innocuous statement made at a celebratory dinner party has unexpected ramifications in Christopher Chen’s “You Mean to Do Me Harm,” at San Francisco Playhouse through Nov. 3.

So does just about everything spoken or thought by the four characters in this baffling one-act workshopped last year as part of the Playhouse’s “Sandbox” series. Now given a full production in the company’s main theater, the piece opens strongly with two interracial couples meeting to celebrate an impending new job for Ben (Cassidy Brown), whose Chinese-American wife Samantha (Charisse Loriaux) was promoted over him at social-good non-profit. His new boss will be a Chinese-American named Daniel (Jomar Tagatac), whose spouse, Lindsay (Katie Rubin) is a corporate lawyer who briefly dated Ben in college.

A comment about a camping trip they took some ten years earlier opens a Pandora’s Box of florid and sometimes paranoid fantasies that impinge on every aspect of professional and interpersonal relationships. Racism—private/personal and historical/institutional—is a strong theme.

Played out on an austere but imposing set by Angrette McClosky, the urbane banter of the four exposes character flaws and motivations that threaten the stability of their relationships. The job offer for Ben is inexplicably withdrawn. This launches a series of sketches that examine in detail both the outer and inner realities of all four characters.

These sketches tend to be vicious—especially a shouting match between Ben and Lindsay—but there is one of the two women with a confessional/conspiratorial tone approaching friendship.

The sketch structure is both too little and too much for this 90-minute show: two little in that there are insufficient dramatic/character arcs and too much in the sense that each sketch could be expanded. It’s as if Chen has opened up his notebook and thrown everything onstage that these four characters could do with each other, without considering the ultimate trajectory of the play. The setup is compelling but dramatic development lacking: plenty of conflict, no resolution.

“You Mean to Do Me Harm” begins and ends abruptly and looks very much like an early-stage Netflix series in which each sketch could be developed into a full episode. Director Bill English and his expert cast try mightily to breathe life into it, but as an evening’s entertainment, it’s an interesting but ultimately unfulfilling bit of theater.