Anyone reluctant to revisit old Ebenezer Scrooge and his ghosts should prepare to be delighted by this musical follow-up to Dickens’s original story. Santa Rosa’s 6th Street Playhouse once again shines with this perfectly polished performance of stunning characters – yes, including the ghosts, following Scrooge a year after Tiny Tim intoned “God bless us, every one.”

Director Jared Sakren was the ideal choice to lead this full-blown musical, having previously directed and played Scrooge in A Christmas Carol. He notes “I’m delighted to bring Scrooge in Love to 6th Street with its festive, heartwarming, and magical story.”

The curtain opens with an annoyed Scrooge (superbly characterized by Jeff Cote’) awakened by his former partner – now hairy ghost – Marley (Peter Downey). Kudos to sound designer Ben Roots for the spooky echo when Downey speaks, in contrast to Cote’s dialog. Scrooge thought his visitation by ghosts was over and points out his forward progress, singing “In Just One Year.” Alas, ghosts have other plans.

The Ghost of Christmas Past (beautiful Alanna Weatherby) floats in to convince Scrooge of her mission. Her hilarious song “I Love Love” may not be hummable for mere mortals, but this soaring soprano nails the highest notes to earn the audience’s spontaneous applause.

Transported to a long past Christmas celebration, Scrooge is urged to have a little party fun when his buddy Dick (Skyler King) leads the company in singing “A Regular Day.” Choreographer Joseph Favarola must have worked tirelessly with this large ensemble of adults and children to produce one of several joyous dance scenes.

Scrooge sees himself as a timid young man, well cast in Noah Sternhill. It’s love at first sight for young Scrooge and lovely Belle (superbly acted by Erin Rose Solorio.) Belle is eager, but shy Scrooge is painfully unsure of himself and lets the relationship slip from his grasp.

Cote’ is a formidable actor and comedic talent, and carries Scrooge in Love with energy and perfect characterizations. Singing is not his strong suit, yet his down-to-earth voice harmonizes well when he does a duet with Sternhill singing “The Things You Should Have Done.” Ginger Beavers directs the show’s live music written by Larry Grossman with lyrics by Kellen Blair. The songs are delightful, and move the plot along quickly, just in time for more ghosts.

The big Ghost of Christmas Present (Ezra Hernandez) arrives with an even bigger baritone voice. When he gets into the party action, Scrooge begins to get the picture. A cadre of kids and the cast sing “Do It Now” but Scrooge is unsure.

Finally, the silent and scary Ghost of Christmas Future (King doubles up for this role) shows a dismal ending. Scrooge sings “Sad I’m Dead” to great laughter. This reviewer found the many funny lines peppering this show added to the wit and enjoyment of the total production.

Scrooge at last is spurred to action. Scrooge, Marley, and the Three Ghosts sing “You Can’t Put a Price on Love” that brought the house down. A huge shout-out goes to the behind-the-scenes work of costume designer Mae Heagerty-Matos, and wig/hair/makeup designer Rosanne Johnson. The pair’s wizardry transforms actors into outrageous ghosts and classic Dickens characters. 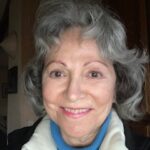