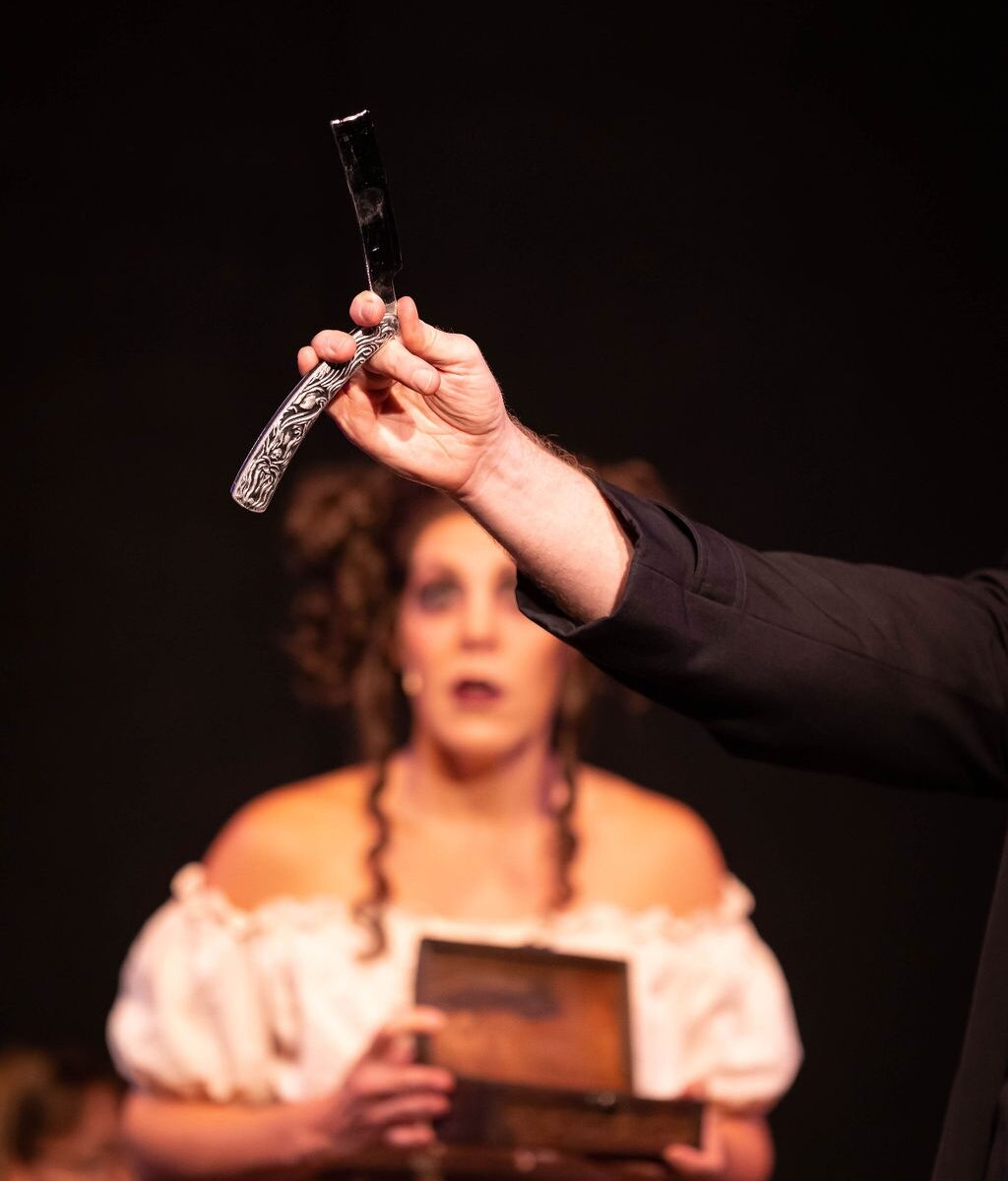 Stephen Sondheim wrote this dark and diabolical opera of an obsessed barber’s revenge gone amuck. It won multiple Tony awards including best musical, despite having only a few memorable songs such as “Pretty Women” and “(Nothing’s Going to Harm You) Not While I’m Around.”

Director/choreographer Staci Arriaga teamed up with costume designer Barbara McFadden to handle the dark tale with a minimal set but a talented cast. They make admirable use of the intimate 99-seat theatre with solo musicians set here and there, both onstage and off.

Throughout the performance, actors appear from the back, sides and front, all the while singing in cockney patois. Makeup designer Brette Bartolucci worked overtime to fashion the faces of actors who sweep through the fog reciting the malevolent background story.

Lucky Penny Productions considers itself lucky indeed to mount this show after a forced two-year break due to Covid.

It’s decaying and corrupt 19th century London. Haughty politicians and desperate vagrants line the streets. A brooding sailor looms over the crowd, calling himself Sweeney Todd (Ian Elliott). His friend and shipmate Anthony (Ethan Thomas) does his best to include Todd in the activities, but Todd has other ideas in mind. He’s escaped a prison colony, sent there to pave the way for the seduction of Todd’s innocent wife. He is informed that she took poison rather than succumb.

Todd is a talented barber who captures the admiration of the street scene by challenging the local barber and swaggering mountebank Aldolfo (Jeremy Kreamer) to a shave-off.  The young assistant Tobias (charmingly done by Tuolumne Bunter) adroitly aligns himself with Todd when Todd wins the match.

Todd is swept into the entreating clutches of Mrs. Lovett (a brash role well handled by Taylor Bartolucci),  the widow pie-maker. She sets him up with a shop above her pie store, giving him the set of knives he once owned. Todd’s rival barber visits and makes the mistake of challenging Todd. Big mistake. He becomes a body for disposal. Since meat is in short supply, crafty Mrs. Lovett spots the opportunity to grind some fresh for her pies. Mrs. Lovett earns customers while Todd bides his time for revenge on the lecherous Judge (David Murphy) and his cohort Beedle Bramford (splendidly done by Sean O’Brien.)

Heaping more darkness on the bleak plot, Todd finds that his baby Johanna (Kirstin Pieschke) is now grown and a ward of the very judge who lusted after Todd’s wife. The libidinous judge is now focused on pursuing the daughter. Todd isn’t happy. He bides his time in fury waiting for the judge to come for a shave.

If it isn’t obvious, note that Sweeney Todd; The Demon Barber of Fleet Street has social elements which make it inappropriate for children. A young boy about age 12 who sat next to me laughed at some of the body dumping, as did many in the audience. The only gasps came when Todd had his own wife in the chair. No spoilers here, but this show doesn’t have a happy ending.

The show possesses sufficient twists and turns in the plot to keep the audience engaged. Sondheim’s songs and rapid-fire lyrics are a real challenge; a few audience members commented that they couldn’t follow all of the story. It’s classic Sondheim, with what some describe as “too many words.”

The show is well-cast and meticulously timed with many entrances and exits. It is a perfectly macabre show for the season.