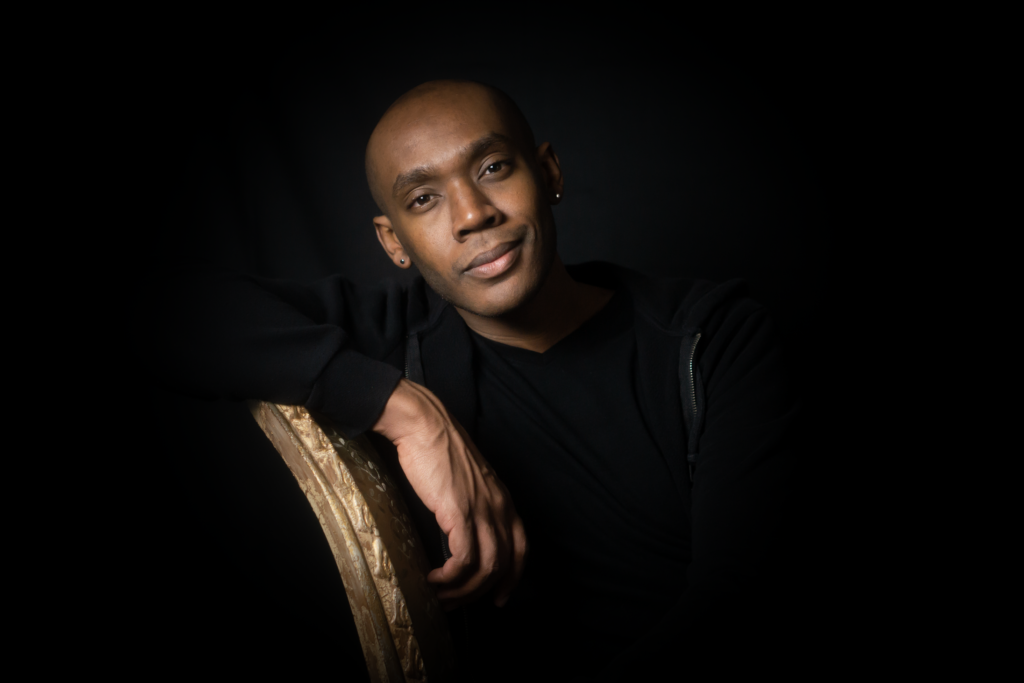 Seafus Chatmon-Smith is a singer-songwriter, multi-instrumentalist, producer, music director, sound designer, and scenic designer. He is a recipient of a San Francisco Bay Area Theatre Critics Circle “Excellence in Theatre” award for his 2019 scenic design of Admissions for Los Altos Stage Company.

A California native who grew up in the San Francisco Bay Area and in the Central Valley, his career in entertainment spans from onstage to behind-the-scenes. In the mid-to-late 2000s, he played in various bands before going on to front his own band, Vasco Skys, formed by him and drummer Richard Messenger III. In 2010 he joined the band Dallas, (now known as Bryan Dallas) as keyboardist and background vocalist. After playing FM 107.7’s Bone Bash X concert, he decided to take a break from the music stage.

Seafus’ first work in theatre was as a student, in Las Positas College’s 2006 production of Macbeth, as a sound designer. He began working in entertainment staging and lighting in 2012, which ultimately led him back into the theatre, first as a sound engineer/designer, then into music directing and scenic design.

Seafus is currently designing the Steel Magnolias set for Los Altos Stage Company, originally slated for the spring season of 2020, but due to the COVID-19 pandemic has been pushed to the spring of 2021.

SS: Though I have worn many different hats in theatre, and still do, my introduction into the inner workings of the theatre was in college where I took acting and technical theatre classes. I fell in love with the process.

ASR: What was the first play you worked in for a paying audience?

SS: The first show I did was a production of My Son Pinocchio, as a sound engineer.

SS: I’ve been involved with five different theatre companies—from children’s theatre to high school, to college and community theatre. I’ve been working in theatre in various capacities since 2013.

ASR: Did you anticipate that you would become as successful as you have?

SS: Truthfully I don’t know what I’m doing, other than trying to do my best. Not sure what kind of success I’ve achieved just yet, but having received an award from SFBATCC, I have hope that I’m headed in the right direction.

SS: I’ve worked for companies that have a specific focus, but I myself strived to work on any and all projects that tell great stories. Hopefully inspiring new dreamers like myself, to create new worlds we’ve yet to experience.

SS: It’s two people really: Michael Rinaldi and the late Jeremy Hamm, educators that have done amazing things in their lives to enrich the lives of others as well as my own.

ASR: With the pandemic, it will likely be several months until theaters reopen. How are you coping with the shutdown?

SS: As an independent artist, this time has and continues to be difficult for me, as I’m sure it has for our entire community both on the small and large scale. Right now it’s hard as shows have been postponed with the uncertainty that they will ever go up, though I remain positive and hopeful that in time things will get better.

ASR: How has the crisis affected your planning for the coming seasons? How do you envision the future for the theater community overall?

SS: Well to the first question.. . All of my shows that were in progress that aren’t canceled, have been postponed until the 2021 spring season. And to the second.. . I’m hopeful that in the future things will pick back up, though I know it’s going to take some time.

ASR: Almost forgotten with the pandemic is the crisis caused in the performing arts by the passage of Assembly Bill 5, requiring most workers to be paid the California minimum wage. There are multiple efforts in Sacramento to get performing artists exempted from this. Has AB5 affected your theater company’s plans?

SS: AB5 was passed just before the COVID-19 crisis, so I have yet to really experience its impact, though I’m sure it will bring about many changes to the contractual agreement side of things. I’m sure we will work out a way for art to continue as it should.

SS: From the first time I heard the original cast recording, my favorite musical of all time is Phantom of the Opera. From the score and story to the dancing and technical theatrical gymnastics, to me it is all that you could ask for.

My favorite comedy is Noises Off. As someone who has spent so much time backstage as both a performer and crew member, I can give first-hand accounts of the hilarity that inevitably comes from behind the curtain. As for dramas… Tyler Perry’s Madea Goes to Jail is one of my absolute faves, though I really like most all of his shows.

ASR: What is Shakespeare’s most over-performed play?

SS: Romeo and Juliet would be the most over-performed and yes, it could be put in the vault.

SS: It would have to be sets. One of my favorite things to do is to imagine the world in which the story takes place and bring what’s in my mind to life. It can be a powerful thing giving a visible voice to a story. Look at Hollywood!

SS: Given the current climate this may be an unpopular opinion but . . . Tom Hanks. The talent he poses in emoting is something striking, both on the surface as well as in the depths of the characters he chooses to portray.

SS: As a performer, I try to practice my craft as much as possible, then I do a full body and vocal warmup. All dependent on what part I’m playing of course. And to relax after. . . I love a good gathering with friends. I don’t really sleep much, maybe go to a movie or chill on the couch with a nice bottle of wine.

SS: Really it takes more than this, but if you don’t have these three things, you won’t be able to get very far with me. So…

2. An understanding of conscious learning.

SS: The relationship between myself and the story, as well as everyone involved. My belief is, if you have a great story and a wonderful team, then anything is truly possible.

ASR: What’s the most excruciating screw-up you see onstage?

SS: When someone has cast an actor that can’t sing in a musical. Nobody wants to hear a cat being tortured for two hours, and we all know it happens.

SS: Due to COVID-19, I am currently out of work. Normally when not working on a specific show I work for an entertainment lighting and staging company, as well as in various personal music endeavors.

SS: As a singer-songwriter and record producer I’m usually making music when not working. However, now with so much more time on my hands, I’m learning the craft of screenplays. I’m also a sucker for amusement parks, beaches, and hiking.

ASR: Do you follow other arts—music, film, dance, painting/sculpture? Do you actively do any other arts apart from the theater?

SS: Music-making would be number one on the list. I love to dance and have been a choreographer for multiple projects. Cinema is one of my all-time great loves, I would love to direct and be in a film one day. In my late teens, I was a magician. From painting to building, sculpting, and most things in between. I have either done it, do it, or enjoy watching it being done.

ASR: You discover a beautiful island on which you may build your own society. You make the rules. What are the first three rules you’d put into place?

2. Bring your own bottle of sauterne.

3. No acts of hate or violence!

ASR: If you were arrested with no explanation, your friends and family might assume you had done what?

SS: Been caught sneaking into a concert.

ASR: What three songs are included on the soundtrack to your life? And why each?

SS: 1. Michael Jackson’s “Smooth Criminal,” because I love the choreography in that video and love to dance to it.

2. Prince’s “Partyman,” because as a kid I wanted to be Batman, and still do!

3. “Stuck,” a song I wrote about how I feel during this COVID-19 pandemic.

ASR: A fashion accessory you like better than others?

SS: Sunglasses are a must at all times. As long as I have a pair we’re ok.

SS: I have a healthy respect for human life so the only thing for me in this category would be rock climbing! You have to take risks in life to move forward. I believe you take risks whether you choose to or not. Daring to live is risky, and sitting on the sidelines is to risk never having lived at all.