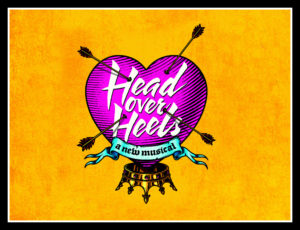 San Francisco’s Curran Theater is the last stop before Broadway for “Head Over Heels,” the delightful new musical featuring the songs of 1980s girl group the Go-Go’s.

Reputedly the most successful female pop group of all time, the Go-Go’s helped define the decade with a long run of infectious tunes, given new life in this stupendously quirky production. The opening scene is a fantastically well-done ensemble performance of “We Got the Beat” under a proscenium arch emblazoned with the faux-Latin slogan “Habemus Percussivo.”

Developed by Jeff Whitty from “The Arcadia” by Sir Philip Sidney, adapted by James Magurder, and directed by Michael Mayer, “Head Over Heels” is a pseudo-Shakespearean romantic comedy about a royal family seeking to prevent a prophecy of doom. This involves a troublesome journey to Bohemia, foreboding appearances by a transgendered oracle, mistaken identities, gender-fluid coupling, class-defying hookups, a self-doubting monarch, and some of the most spectacularly whimsical sets ever conceived—all of it propelled by the Go-Go’s great thumping pop-rock, done live by an ace all-female band above and behind the stage. Spencer Liff’s choreography is superb right from the opening drum whack.

The story concerns Basilius, the King of Arcadia (Jeremy Kushnier) and his wife, Queen Gynecia (Rachael York) who are seeking a proper marriage partner for their eldest daughter Pamela (Bonnie Milligan). Pamela’s little journey of self-discovery includes the realization that she isn’t all that interested in men, but her sister Philoclea (Alexandra Socha) is—especially Musidorus (Andrew Durand), a handsome shepherd boy with an exaggeratedly Shakespearean manner of speech. His speech is so ornate that at moments the other characters—no elocutionary slouches themselves—interrupt him and demand that he “speak English.”

Class distinctions prevent any immediate linkup between Musidorus and Philoclea. Disguising himself as “Cleophila,” an Amazon warrior woman in Roman armor and a fluffy blonde wig, he joins the travelling party and is soon the object of affection for the king himself. The Queen has a wandering eye, too. Central to the plot is the budding love affair between the marvelously comical Pamela and her maidservant Mopsa (Taylor Iman Jones), who also happens to be the daughter of the king’s goofy viceroy Dametas (Tom Alan Robbins). Anchoring the production, Jones is wonderfully confident in her role, and a tremendous singer, as proven during Mopsa’s contemplative visit to the island of Lesbos, where she gives the song “Vacation” a whole new meaning.

Kushier does likewise with “Lust to Love,” reinterpreted late in the saga as a revenge song during a sword fight between the king and Musidorus. No worries! Everyone lives—and loves—happily ever after.

Arianne Phillips’s costumes, Kevin Adams’s lighting, Andrew Lazarow’s projections, Kai Harada’s sound, and Julian Crouch’s set design all make huge contributions to the wild success that is “Head Over Heels.” The primary actors are superb, as are the ensemble, all of them veterans of multiple big-time musicals. The result is a stunning powerhouse performance that brought the opening night crowd to its feet in sustained appreciation—a crowd, it must be mentioned, younger and more boisterous than typically fills San Francisco’s big theaters, and one that lingered for the after-party in the lobby, enjoying the music of the B-52s, Talking Heads, Devo, and many other contemporaries of the Go-Go’s.

“Head Over Heels” is simply an outrageously over-the-top good time. It may be the most fun you will ever have in a theater.

What: “Head Over Heels,” the Go-Go’s Musical.

130 minutes, with one 15-minute intermission

Rating: Five Out of Five Stars