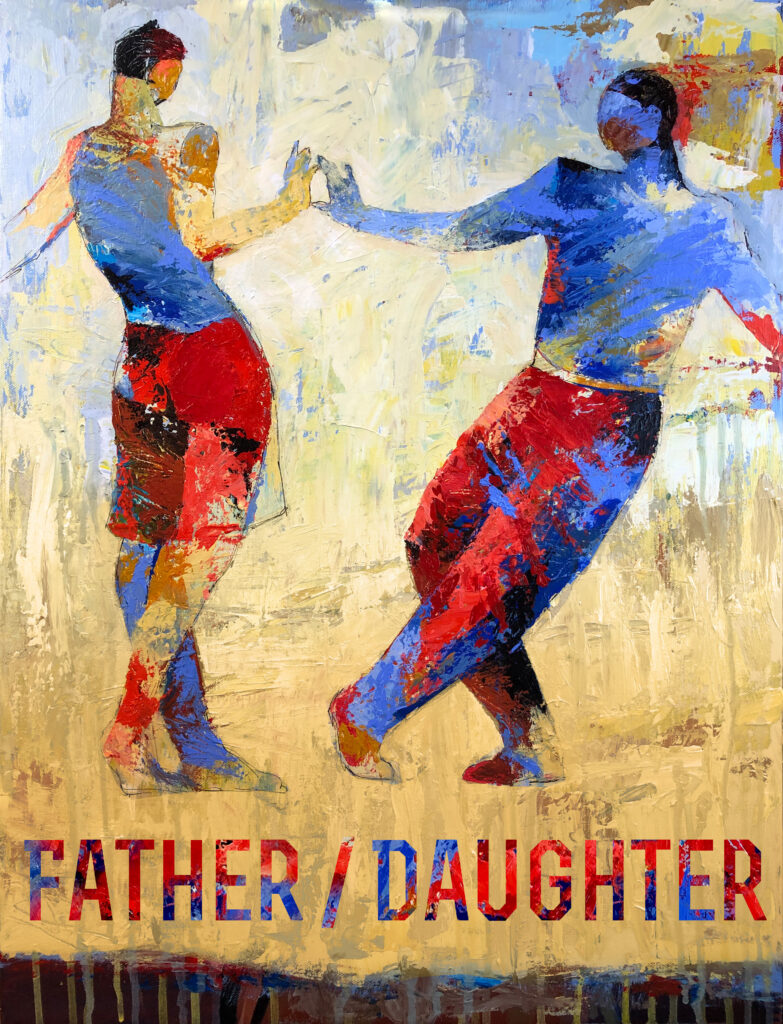 Two talented actors do their best to breathe life into the world premier of Kait Kerrigan’s “Father/Daughter,” at Berkeley’s Aurora Theatre, through Sunday December 12.

Recipient of the Edgerton Foundation New Play Award, “Father/Daughter” opens with a divorced chemistry teacher named Baldwin (William Thomas Hodgson) meeting a young woman named Risa (Sam Jackson) in a pickup bar. It’s a tentative and prickly introduction for both, one that doesn’t seem to have much potential, especially for Risa, but a relationship emerges. Nearly two hours later, we are 20 years into the future, with Baldwin having a heart-to-heart discussion about marriage with his adult daughter Miranda, also played by Jackson.

Between these two bookends is a lengthy meandering slog through thorny modern family relationships. Hodgson also plays the part of Louis, who is either Baldwin’s father or Risa’s father. It’s not clear which—a confusion amplified by Kerrigan’s clumsy attempt at blending characters and shifting time.

The…well-performed dance break, about twenty minutes in, is a welcome relief….

Many plays employ actors in multiple roles, but for this to work their characters must be clearly differentiated—not the case in “Father/Daughter.” Risa and Miranda look and sound identical, as do Baldwin and Louis. Plus there are scant dramatic shifts to indicate which characters Hodgson and Jackson are playing. This may be intentional on the part of the playwright, to show how human behavior doesn’t really change from one generation to the next, or it may be the fault of director M. Graham Smith in not encouraging more differentiation from his cast.

The net effect on the audience is something like bobbing about in a rudderless boat: we don’t know where we are other than knowing we’re going nowhere.

There’s no serious goal for either Risa or Baldwin, other than trying to make some sort of sense of their lives individually and together. There’s nothing illuminating about any of their interactions, but somehow they muddle through, which seems to be the only point of the tale. The production comes off like a condensed version of years of family counseling—lots and lots of talk, not much action, and ongoing personal and interpersonal problems that will never be resolved. The dramatically pointless but well-performed dance break, about twenty minutes in, is a welcome relief from interminable self-absorbed conversation.

Kerrigan’s script is a moribund low-stakes/low-amplitude  exercise in art for art’s sake. We can see what she’s trying and failing to achieve, but she could do it better by revising the script, perhaps under the tutelage of Mark St. Germain, whose “Dancing Lessons” is a master class in two-actor romances.

“Father/Daughter” has implied potential but even actors at the expert level of Hodgson and Jackson can’t make it fly. Kate Boyd’s elegant set offsets the dramatic boredom to some extent, as does Cliff Caruthers’ evocative sound design. Takeaway: potential ticket buyers should be wary of obscure new plays with no intermission. There’s a reason why they’re presented that way.