Aldo Billingslea is the Father William J. Rewak S. J., Professor of Theatre Arts at Santa Clara University. A member of Actors Equity Association and the Screen Actors Guild, Billingslea has appeared in numerous theatrical productions in the Bay Area and across the country.

Billingslea resides in Santa Clara with Renee Billingslea, his visual-artist wife who also teaches at Santa Clara University, and Trinity, their daughter, who is captain of the Santa Clara Bronco rowing team. 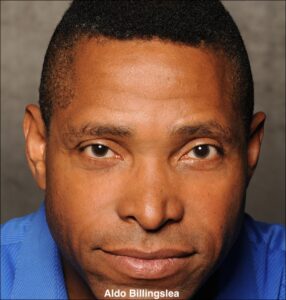 AB: I thought it would help me get kissed by women. I was in 7th grade.

I did not get my first stage kiss until I was a sophomore in college. And then it was on the cheek.

ASR: How many theaters have you been involved with?

AB: Not including the theaters where I have acted, I’m currently on the board of the Lorraine Hansberry Theatre and the Marin Theatre Company. I’m an associate producer and ambassador for PlayGround. I’ve served on the board of Renegade Theatre and Playground and on the advisory board for Gritty City Youth Repertory Theatre. I have participated in the Artistic Director searches for Marin Theatre Company, the Aurora Theatre, and TheatreWorks. I’m over-involved.

ASR: What was your first paying theatrical gig?

AB: It was the Jones and Schmidt musical Celebration! I played Potemkin. It was summer of 1984 in a converted barn theater in the hill country of Texas, at a place called Mo Ranch.

ASR: Who has had the biggest influence on your career?

AB: There are a ton of people who contributed to the development of my professional career! Apart from my wife Renee, one of the most significant would be my college professor Dr. Barbara Means Fraser. She directed me a few times in college, encouraged me to audition for graduate school, and after I graduated with those degrees, encouraged me to go to Ashland. She then helped me work my way to Santa Clara University where I’ve been teaching for the last 22 years.

ASR: How has the coronavirus shutdown affected you?

AB: I may actually be busier since the shutdown. Not commuting to theaters means the opportunity to work with more of them. Our Juneteenth Theatre Justice Project was created in collaboration with PlayGround, the Lorraine Hansberry, and Planet Earth Arts, and forty other Bay Area theatres, plus twenty more theatres across the country to read Vincent Terrell Durham’s Polar Bears, Black Boys, and the Prairie Fringed Orchid.

It was thrilling and led us to launch the Black Theater fundraiser, an initiative to fund black theaters around the country. They are hurting partly because of COVID-19 and because black theater isn’t properly funded.

COVID-19 canceled several gigs for me, the most painful of which was Lauren Gunderson’s Book of Will at TheatreWorks, which would’ve allowed me to appear in the last play directed by Robert Kelley as artistic director and be on the stage again with Jim Carpenter, Jennifer Le Blanc, Francis Jue, Rebecca Dines, Mark Anderson Phillips, Jackson Davis and a host of other fabulous actors.

Jennifer Le Blanc and I were supposed to do another Othello at Pacific Repertory Theatre—we had done it at Marin Shakespeare in 2004—so after 16 years later I should be better. Jennifer and I were also supposed to do Death and the Maiden together, also at Pacific Rep. However, had I been engaged in those productions, I wouldn’t have been able to participate in the great collaboration for Polar Bears, Black Boys, and the Prairie Fringed Orchid, or participated in the black theater fund. So the Lord does work in mysterious ways!

ASR: What’s the worst aspect of the shutdown for you?

AB: Losing the immediacy of being in a theater, and relating to human beings without the separation of a screen. It is invaluable and sorely missed! However, this theatrical Zoom work is new and creative. It’s going to send us into a new realm and a new burst of exploration as people try to find ways to harvest the potential.

ASR: What are some of your favorite plays?

AB: Othello and Joe Turner’s Come and Gone. Give me August Wilson and William Shakespeare and I’d be good for a while. Also, I love Marcus Gardley’s Black Odyssey and Sarah Burgess’ Dry Powder, Lynn Nottage’s Ruined, and Lauren Gunderson’s Book of Will and I am so very very taken by Polar Bears, Black Boys, and the Prairie Fringed Orchid that I’m directing it at Santa Clara University this fall!