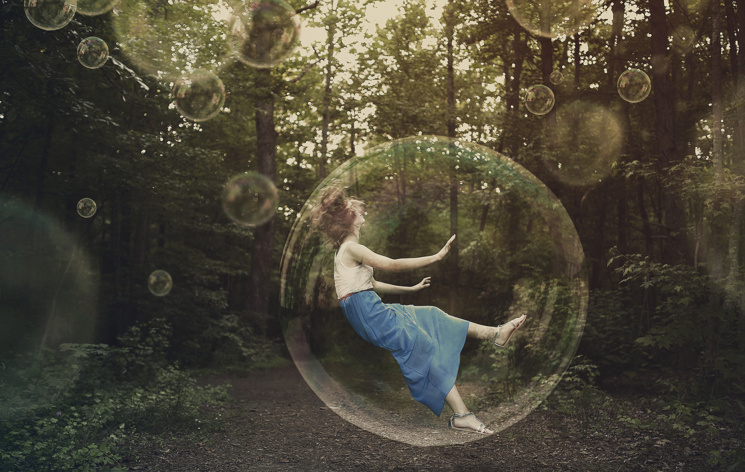 A Pulitzer Prize and Tony Award nominee, the prolific Ruhl mines the comical friction between middle-class morality and libertine lifestyles when two married New Jersey couples decide to invite a “polyamorous” young woman and her two male lovers to their annual fete. Act One is a lengthy bit of exposition in which we get familiar with the two couples—Jane and Michael (Angela Squire and Anthony Martinez, respectively) and Georgie and Paul (Gina Alvarado and Corey Jackson, respectively), sitting around drinking and bemoaning their highly-educated but not entirely satisfying existence. 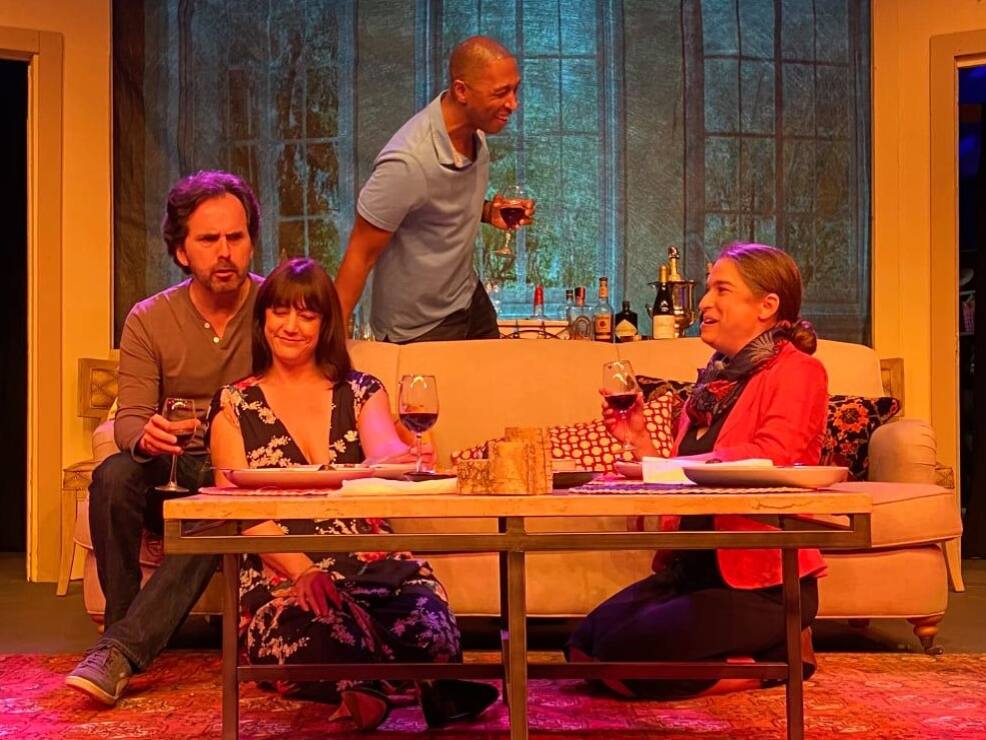 Paul is an architect who’s grown bored doing “bathroom remodels” and has moved instead toward writing and lecturing about architecture. Michael is an unsuccessful musician who’s found subsistence writing jingles. Jane works in a law office where she’s become intrigued with Pip (Abbey Lee), an intern whose unconventional lifestyle has prompted her to suggest including Pip and her lovers as party guests—a slightly naughty shared joke that ultimately forces the four friends to confront their  conceptual limitations about love, eroticism, and commitment.

Self-confrontation is most pronounced in Georgie, who befriends Pip to the point of going hunting with her, a bumbling attempt at making spiritual connections to the natural world that ultimately lands them in jail. Georgie’s personal dramatic arc is the strong thread in this tightly-woven but loose-around-the-edges story—in fact, late in the play she steps out of the story and addresses the audience directly, a somewhat jarring departure from what might otherwise be expected given what has transpired beforehand. There’s also a pivotal subplot involving Jenna (Jewel Ramos), the mostly-absent teenage daughter of Jane and Michael, and god-daughter of Georgie, who seems to have a better relationship with her than do her own parents. 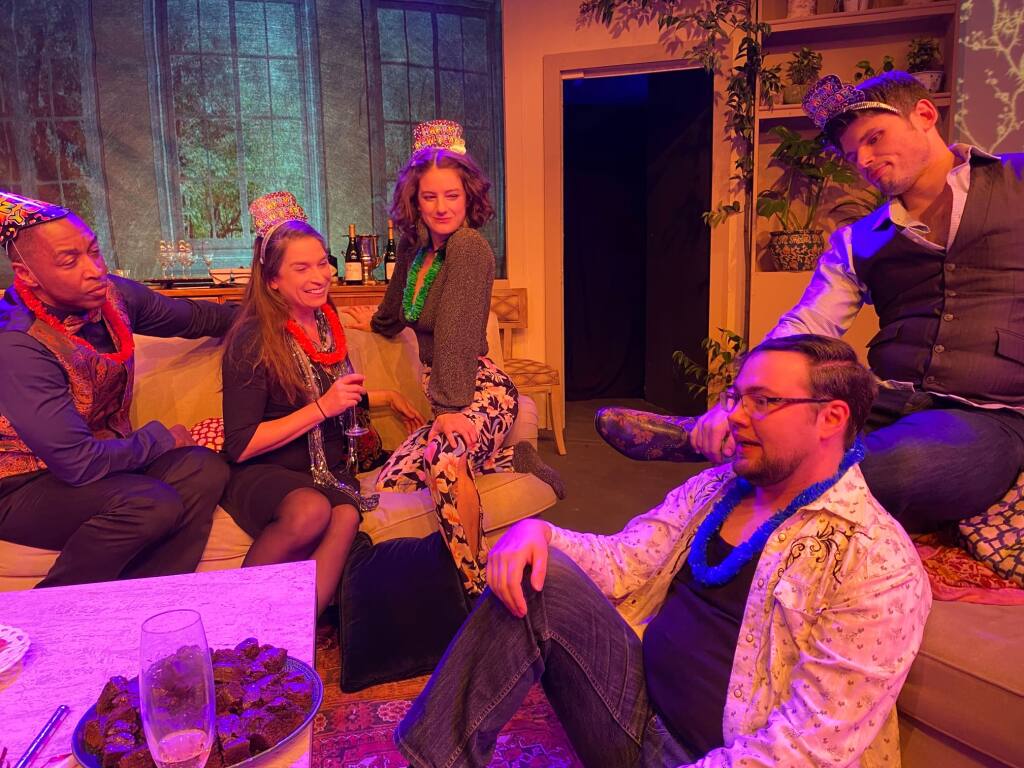 Jenna’s surprise return home is the laugh-out-loud high point of this prescient comedy/drama, a plot device as delightful in its small way as is Pip’s extended improvisational dance interpretation of the old country song “She’ll Be Coming Round the Mountain.” The uninhibited Abbey Lee is fantastically exaggerated in the part, a diametrical opposite from the emotionless android she played recently in “Galatea” at Spreckels Performing Arts Center.

Anderson Templeton is Freddie, the soft-spoken, sensitive-to-the-point-of-annoyance member of Pip’s coven; Nathaniel Mercier is the more intellectually aggressive David, a mathematician given to lecturing about Pythagoras and theories of the triangle—in his words, the strongest form in nature. His fascination with numbers resonates with architect Paul and musician Michael, but his riff on the strength of the three-cornered form is clearly meant as a challenge to the two married couples and perhaps to the audience. Cue David Crosby’s song “Triad.”

Director Sandra Ish has worked up a gorgeous presentation of this piece, in which can be seen roots as deep as Edward Albee’s “Who’s Afraid of Virginia Woolf?” and Ang Lee’s film “The Ice Storm.” Argo Thompson’s set works seamlessly as Jane and Michael’s home, a forest where Georgie and Pip go hunting, and the jail where they ponder their fate. Patrick Nims contributes substantially with gorgeously immersive three-channel video projections, as does April George with lovely lighting design. 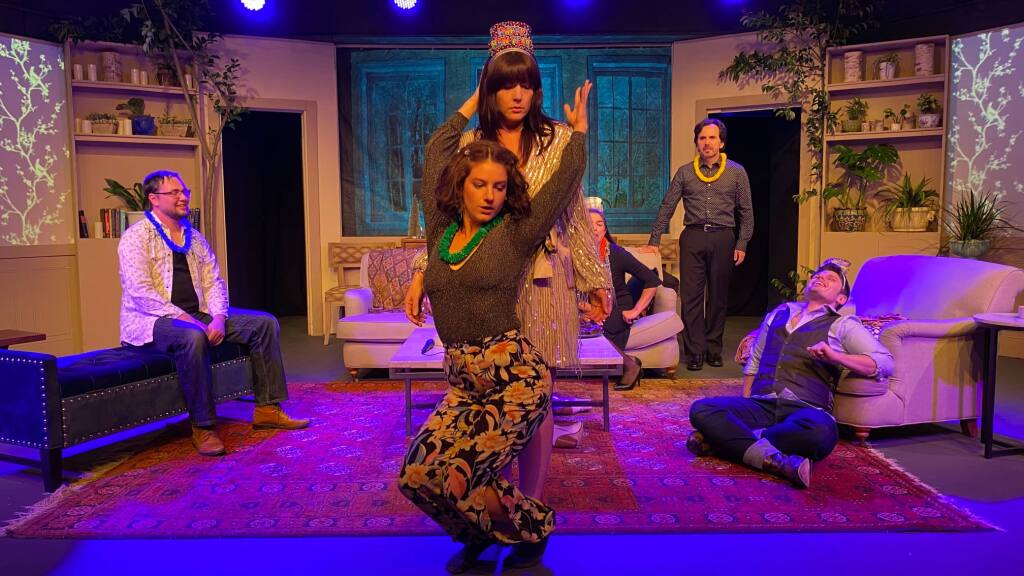 The show’s female cast members—in particular, Lee, Squire, and Alvarado—are very strong in this production, but it’s well performed by the entire cast. No weak links! There’s a lingering sense that playwright Ruhl may not have wrapped up every loose thread in this well-paced tale—perfectly appropriate in that very little in real life ever has clearly defined starts and stops. Takeaway: in matters of love, live in the moment and consider all possibilities.

Whether you are single, married, polyamorous, or undefined, “How to Transcend a Happy Marriage” is funny, engaging, and provocative for all the right reasons.