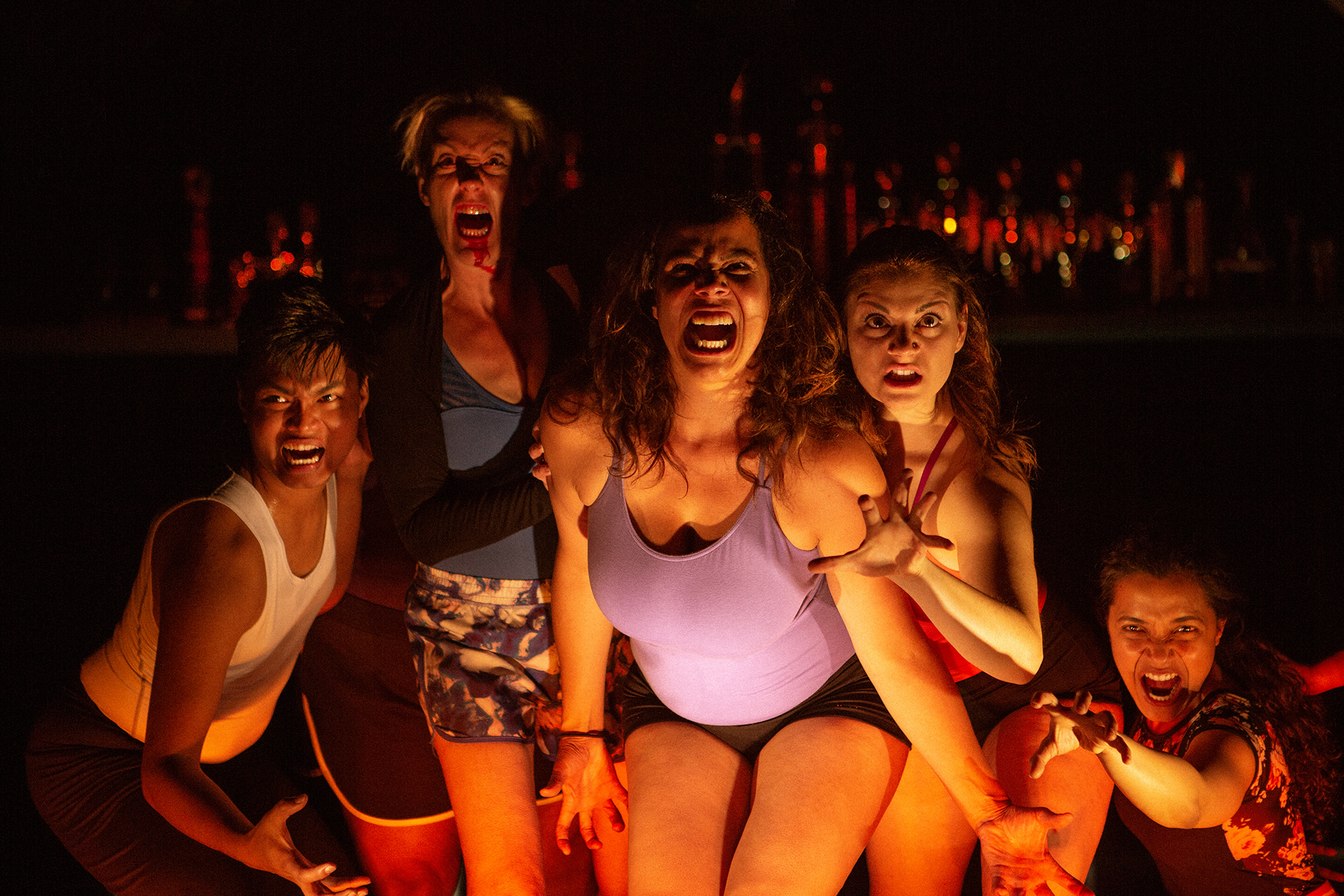 Time flies when you’re having fun. And it slows to a crawl when you aren’t. “Dance Nation” at San Francisco Playhouse succeeds in proving that an hour and fifty-two minutes can feel like an eternity. It fails at just about everything else it ostensibly sets out to accomplish. With no intermission and thus no chance for a polite escape, this production feels more like an avant-garde experiment in torture than an illuminating night at the theater.

The premise is straightforward enough. An Ohio dance troupe comprised of preteen girls – played by adult women of various ages, at the playwright’s instruction – is vying for a spot at Nationals in Tampa Bay. The competition is fierce, and things get really strange and gory. But there isn’t much more to the story, if it could even be called that. Instead it merely serves as a backdrop for a series of disjointed, drawn-out monologues, ranging from flat and painfully boring to overly-intense and agitating, like a bad slam poetry throwdown at the local café where angry feminists commune to rail against the patriarchy and destigmatize the female body. It plays like a misguided grab at women’s empowerment wrapped up in a hollow coming-of-age story about resilience and self-discovery. But none of it rings true.

Clare Barron has packed a lot into her characters, but little that’s terribly realistic or relatable. We bear witness to one girl’s narcissistic meltdown, reaching fever pitch as she shouts at the audience “I’m going to make you my bitch, you motherfucking cunt-munching piece of shit prick. I am your god. I am your second coming.” In another scene, a girl who’s just gotten her period smears menstrual blood across her face like war paint. In yet another, a familiar childhood pact takes a warped turn when the girls wipe armpit sweat on each other’s upper lips and kiss (what ever happened to the good old pinky promise?). We watch grown women depicting thirteen-year-old girls strip naked together without a hint of modesty or embarrassment. (Does this match your childhood locker room experience? It certainly doesn’t mine.) And yet despite their comfortable bond, the show opens awkwardly on the troupe abandoning an injured teammate on the dance floor. It all feels gratuitous, ill-fitting and off-key.

Are these the inner thoughts and lives of women? Good grief, let’s hope not.”

The coup de grâce is the show’s conclusion (dare I call it that), which features the entire cast chanting “I wish my soul were as perfect as my pussy!” – louder with each repetition – so many times that I could hear it echoing inside my head the whole drive home. Are these the inner thoughts and lives of women? Good grief, let’s hope not. None of it serves any discernible purpose but to shock and repulse the audience, for shock’s sake alone. Despite being the work of a young female playwright, “Dance Nation” is so deeply out of touch with its subject matter that it fails to be emotionally accessible in any meaningful way. It tries really hard to be controversial and edgy – in keeping with much of contemporary art – but only managed to leave me feeling tired, bored and angry. It certainly didn’t resonate with my experience of puberty and early womanhood, adolescent rivalries and friendships, the inherent camaraderie in competitive sports, or just about anything else it reaches for.

Without more believable and fully-formed characters or a compelling and cohesive narrative arc, it’s hard to feel all that connected to or interested in anything that’s happening on stage. The dancing isn’t very good, either. It’s just a lot of forced, unnatural dialogue broken up by obnoxious monologues and little to no plot, with some pointless nudity and a lot of fake blood thrown into the mix. The actors commit a commendable amount of energy to their roles, but it’s not enough to make us care about what happens to their characters. The set doesn’t help much, either. It’s clunky and underwhelming, offering little to look at but a shelf full of trophies and large pillars that often block the audience’s view.

In light of this experience, it’s difficult to fathom why this play has received such high praise from other critics. (It won the Relentless Award, the Susan Smith Blackburn Prize, and was even a Pulitzer Prize finalist.) Is Becca Wolff’s direction at fault? Did SF Playhouse simply miss the mark with this one? Given their excellent track record, it’s hard to imagine that’s the case, but without any basis for comparison, it’s impossible to know exactly what to think. All I can say with certainty is that from start to finish, I didn’t find a single minute of this show enjoyable. Seldom have I felt so anxious for something to be over. SF Playhouse calls itself an “empathy gym,” but the only thing “Dance Nation” exercised was this reviewer’s patience.