Better late than never, the old adage has it. Here (in no particular order) are some memorable productions from last season, a year full of four- and five-star achievements.

The Jungle (Curran Theatre): San Francisco’s renovated Curran Theatre was re-renovated for an immersive recreation of a 2016 crisis in a refugee camp in Calais, France. A huge and hugely talented multi-ethnic cast made this show last season’s most profound and moving theatrical experience. (BW) 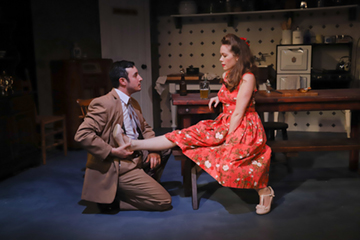 Barbecue Apocalypse (Spreckels): The laughs were served well-done in this quirky comedy, thanks to a witty script marinated in millennial-centric humor and a talented ensemble. Clever costumes, strong technical work, and excellent casting proved that all it takes to survive the end of days is a little raccoon meat and some serious comic relief. (NS)

Romeo and Juliet (Throckmorton): Mill Valley’s Throckmorton Theatre and the streets around it became Verona, Italy, in a sweetly evocative, imaginative, and fully immersive production of Shakespeare’s timeless tragedy. (BW) 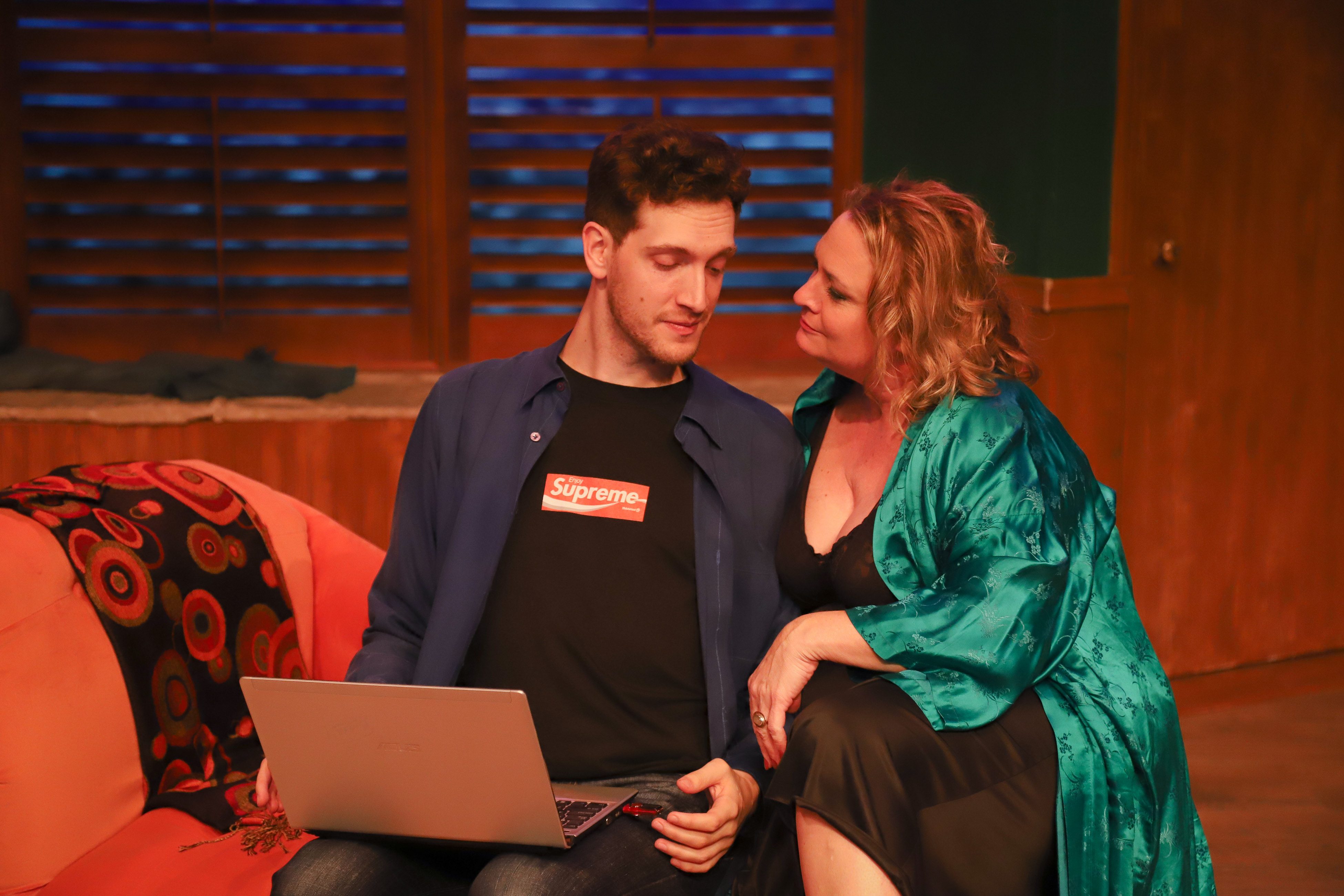 Sex with Strangers (Left Edge Theatre): Left Edge Theatre turned up the heat in “Sex with Strangers,” a seductive modern romance that broaches big questions about love, ambition, and the price of success in the digital era. Dean Linnard and Sandra Ish brought the story’s unlikely couple to life with electric chemistry and powerful, nuanced performances. (NS)

Incidents in the Wicked Life of Moll Flanders (Ross Valley Players): RVP gambled and won with Jennifer LeBlanc’s adaptation of Daniel Defoe’s 1722 novel. Amber Collins Crane stole the show as the lead in a compelling tale about a beautiful, quick-witted woman who rose from miserable circumstances to respectability through petty crime, stealth, charm, and unusually good luck. (BW) 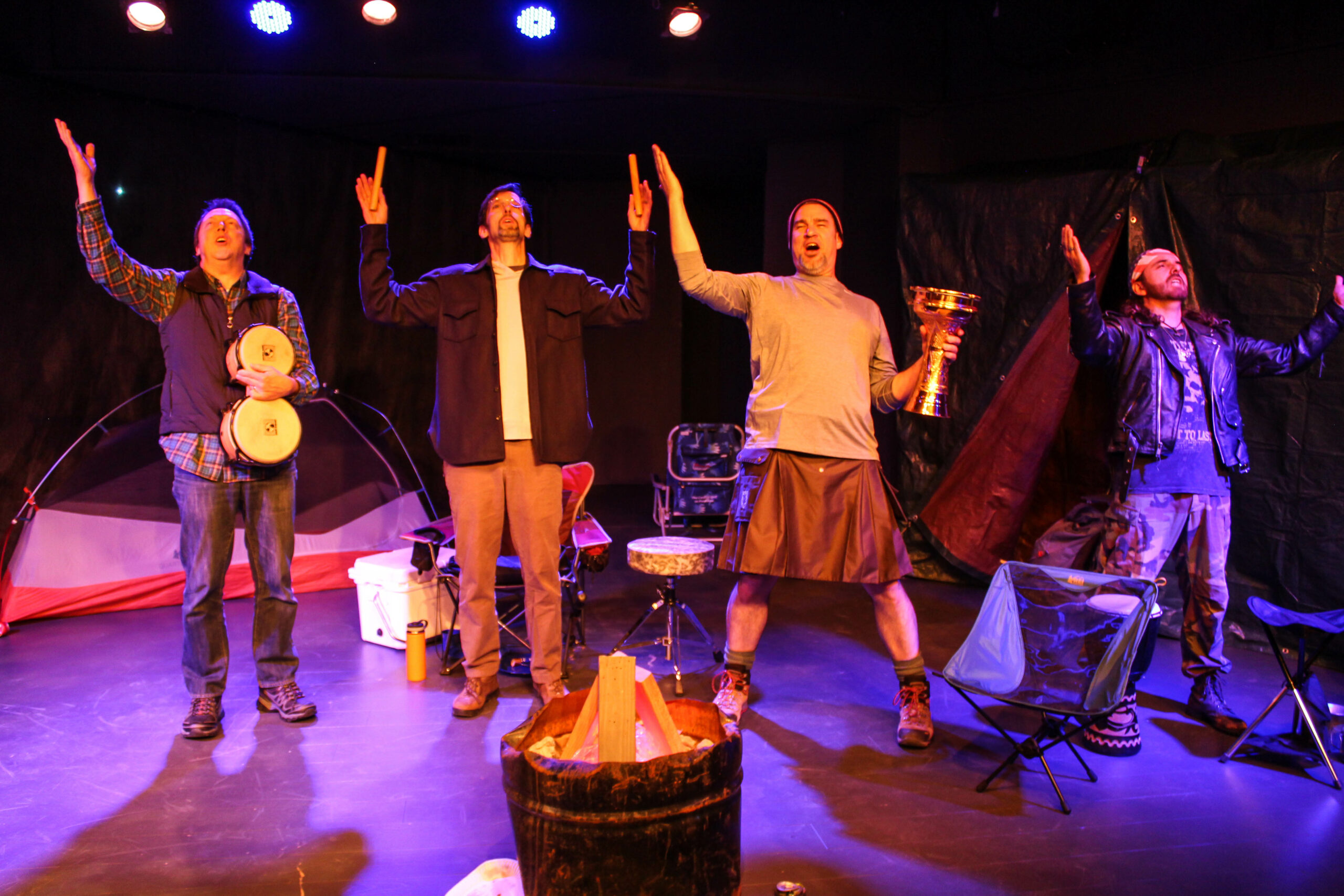 Drumming with Anubis (Left Edge Theatre): Left Edge Theatre invited us along to the Neo-Heathen Male Bonding and Drumming Society’s annual campout, where a group of aging death metal fans communes in the desert to beat their bongos. Things got a little dark, a lot hilarious, and surprisingly touching when the Egyptian god of death crashed the party. Local playwright David Templeton’s brilliant new show earned a 5-star reception, featuring a phenomenal cast and beautiful scenic design. (NS)

How I Learned What I Learned (Marin Theatre Company): Director Margo Hall coaxed a tremendous performance from Steven Anthony Jones, who brought grandfatherly wit and wisdom to the role of playwright August Wilson. A master class in story-telling. (BW)

Faceless (6th Street Playhouse): Former artistic director Craig A. Miller returned to helm this riveting courtroom drama about an American teenager caught running away to join her internet boyfriend in ISIS. Razor-sharp dialogue and powerhouse performances made for an intense and memorable experience in 6th Street’s intimate studio theater. (NS)

The Year of Magical Thinking (Aurora Theatre Company): Stacy Ross glowed in a masterly solo recital of Joan Didion’s play from her book of the same name. (BW) 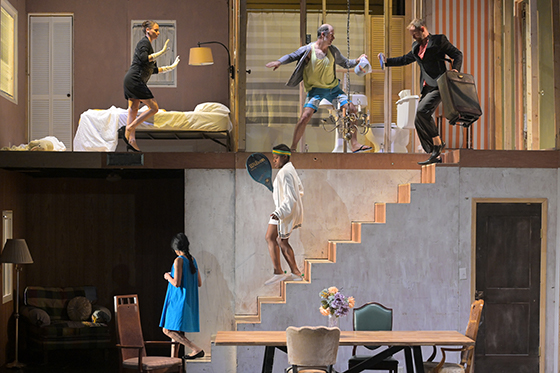 Home (Berkeley Repertory Theatre): In this stunning piece of performance art by Geoff Sobelle, audiences watched a two-story house materialize from the shadows of an empty stage as if by magic. A spectacle of epic proportions, this visual feast reminded theatergoers that a house is just a space in which we come together to make a home. (NS) 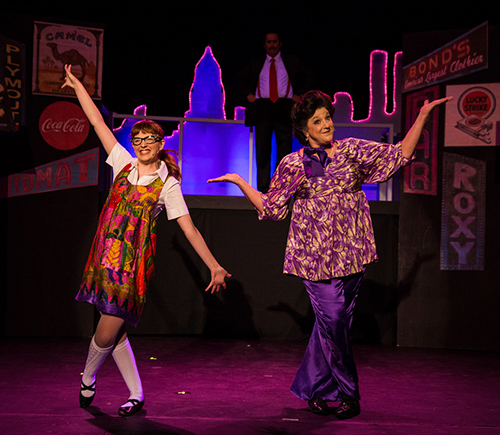 Merman’s Apprentice (Sonoma Arts Live): Daniela Innocenti-Beem brought Broadway legend Ethel Merman back to the stage with a larger-than-life performance in this sparkling world premiere, brimming with catchy tunes and colorful humor. Innocenti-Beem and teenaged costar Emma Sutherland boast some serious pipes, which made this charming new musical all the more fun. (NS)

Mother of the Maid (Marin Theatre Company): A mother’s love and devotion were never so well depicted as in this lovely, heart-rending piece about Joan of Arc’s mother Isabelle (Sherman Fracher). (BW)

Eureka Day (Spreckels): Laughter proved contagious in Jonathan Spector’s whip-smart “Eureka Day,” pitting parents at a Berkeley charter school against each other in the wake of a mumps outbreak. An all-star cast, elaborate set design, and top-notch technical work combined to make this a 5-star production. (NS)

Cabaret (San Francisco Playhouse and Napa’s Lucky Penny Productions): Both of these productions were excellent and amazing versions of this dazzling but starkly disturbing cautionary tale. (BW) 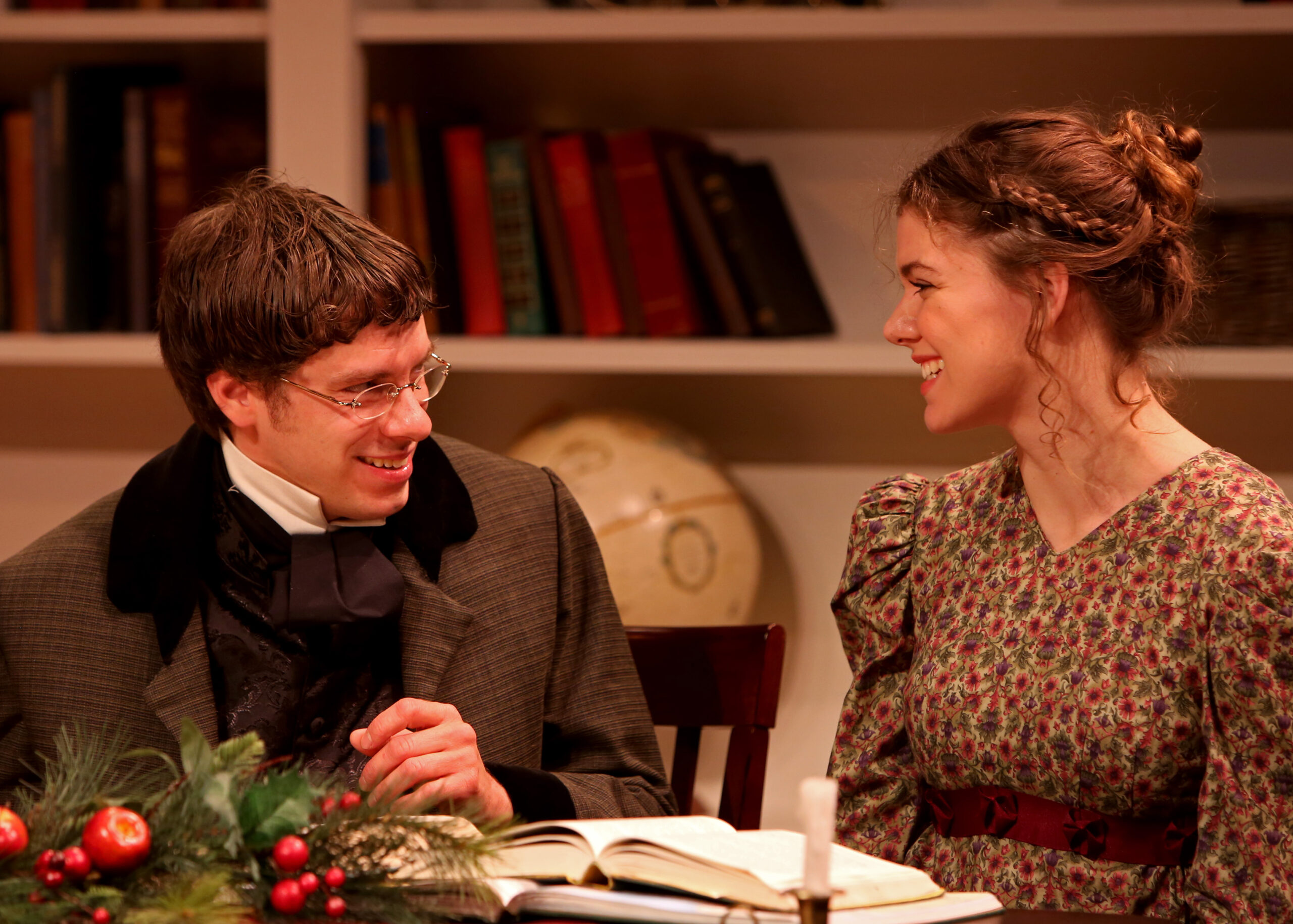 Miss Bennet: Christmas at Pemberley (Spreckels): Theatergoers were dazzled by this cleverly written and superbly acted continuation of Jane Austen’s beloved Pride and Prejudice, containing everything an Austenesque story should: delicious drama, a heartwarming romance, and an abundance of humor and wit. Pitch-perfect direction and exemplary casting made “Miss Bennet” the ultimate holiday treat. (NS)

Harry Potter and the Cursed Child (Curran Theatre): Nonstop high-intensity theatrical magic is the only way to describe this extravagant production, running into next July. (BW)

A Gentleman’s Guide to Love and Murder (Spreckels): Hilarity ensued in this madcap musical about a man clawing his way to the top of the family tree. Tim Setzer stole the show as all nine members of the D’Ysquith family, all of whom meet their ends in some of the most creative and comical ways imaginable. Excellent ensemble work, cute choreography, and clever projections made this one killer production. (NS) 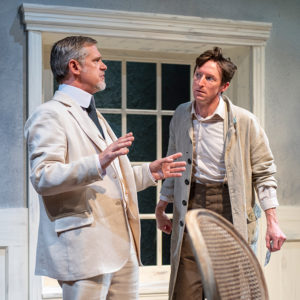 Nothing kills one’s ardor more quickly than hearing this from a partner: “We have to talk.”

That pretty much sums up this reviewer’s take on August Strindberg’s “Creditors,” at Berkeley’s Aurora Theatre Company through February 24. Written in 1888, the then-scandalous play examines the relationships of two men, Adolph and Gustav (Joseph Patrick O’Malley and Jonathan Rhys Williams, respectively) and one woman, Tekla (Rebecca Dines). Adolph is a self-doubting artist with unspecified neurological problems that manifest in spastic mannerisms and ambulatory difficulties. Gustav is a new friend talking him through an artistic identity crisis—should he pursue painting or sculpture?—while  fanning the flames of doubt in him about his wife Tekla, who as we discover later, is Gustav’s ex-wife.

The initial exchange between the two men goes on for maybe twenty minutes—it feels like hours of manipulative psychobabble—until at some point Tekla appears, an independent, free-spirited novelist who has published a book with a central character based on Gustav. She’s been gone a week, approximately as long as Gustav has known Adolph, and has come back to flirt with her own husband while her ex lurks unseen to hear everything they say. There is nothing about the two men that is at all appealing—Adolph is a cringing neurotic and Gustav, a master schemer. It’s hard to imagine what attracts Tekla to either of them. It isn’t money, despite the play’s title.

Tekla is the prototype of a new kind of woman emerging in Western culture at the time—assertive, confident, uninhibited. She can entertain the concept of loving more than one person while the two men cannot. (Strindberg must have thought his character was unique; he accused Henrik Ibsen of plagiarism in making Hedda Gabler a similar type. Certainly Tekla and Hedda cannot have been the only free-spirited women in fin de siècle Scandinavia.) Tekla flirts and spars with Adolph until he leaves in a huff, whereupon Gustav enters and attempts a seduction. Tekla almost takes the bait then thinks better of it, and to cut to the chase, Adolph comes back in and dies of an epileptic seizure. That’s a wrap.

In the week since it opened, “Creditors” has been gushed about by a score of critics, many of whom, it must be assumed, are classicists. And while it’s always unfair to judge the art of the past through the lens of the present, it’s nearly impossible to see what’s so gush-worthy. The story is horrible, but directed by Barbara Damashek, the actors are excellent playing despicable characters—two men suffering from terminal cases of emotional hemorrhoids, and a woman who can’t be trusted. It’s ninety minutes of late 19th century European navel-gazing, a repellent talkathon in which almost nothing happens other than the malicious destruction of the weakest character.

The fact that something is old doesn’t make it valuable or worth reviving. As David Foster Wallace put it in another context, this play is “a supposedly fun thing I will never do again.”