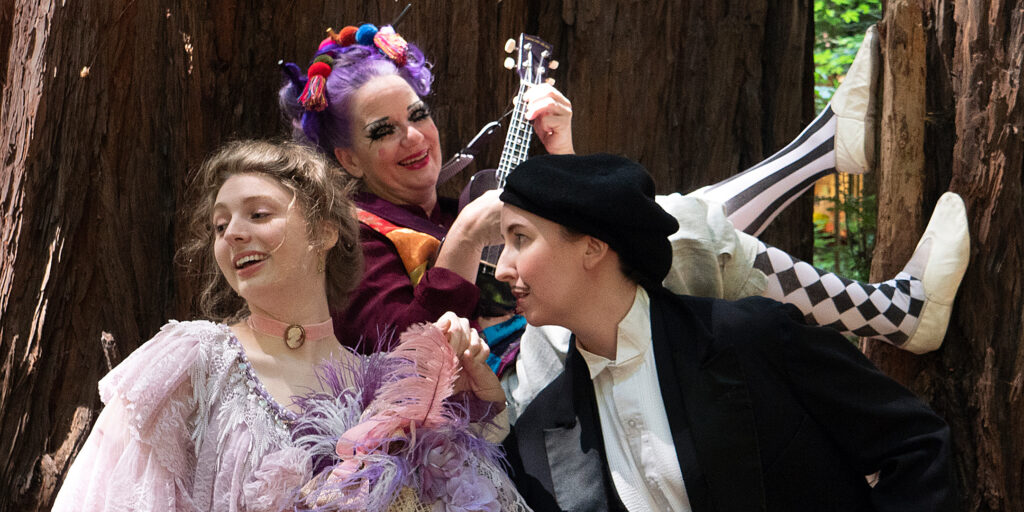 Much like the Bard’s open air venue at London’s Globe Theatre, the Curtain Theatre performs in an historic and open amphitheater in downtown Mill Valley. The ancient redwoods in the grove sway over a hundred feet high, and the acoustics on stage are interrupted only by a bird’s caw or the drone of a passing plane. Volunteers set up and diligently sanitize nearly 70 plastic chairs, leaving ample empty space in front of the stage. Many patrons bring their own chairs, kids, and (quiet) dogs. Blankets are spread out on the gentle slope behind the library, with abundant picnicking.

This “Twelfth Night” transports the audience to the late 1800’s Canadian Maritimes, beginning with live music from four musicians in period garb. Music Director Don Clark and Hal Hughes collaborated to create original songs inspired by this Celtic period. The air fills with sounds of a fiddle, flute, concertina and guitar above the laughter of children and the chatter of adults.

Promptly at 2 p.m., the show begins. The Curtain Theatre has no curtain, so Choreographer and Production Coordinator Steve Beecroft happily welcomes all from the stage, encouraging masks for all who cannot maintain social distancing in the great outdoors. Beecroft’s talent is not limited to behind the scenes: he soon does an amusing turn as the foolish and foppish Sir Andrew.

As to the characters, it takes a while to catch on to all the characters and their relationships. “Twelfth Night” is a typical Shakespeare comedy of gender-switched identities, oddly-placed affection, and swordfights.

Fans of Shakespeare will delight in the familiar opening “If music be the food of love, play on!” spoken by Duke Orsino, a handsome Nelson Brown. He’s lonely in his kingdom, and pines for his counterpart Countess Olivia played by lovely Faryn Thomure. The pair should be bonded, a perfect match, but that’s not going to happen.

“…a typical Shakespeare comedy of gender-switched identities and oddly-placed affection. And swordfights.”

Good jobs must have been hard to find in 1890. Duke Orsino hires a new servant, Viola. She’s female but poses as male to get the position. Played by a polished and perfect Isabelle Grimm, Viola falls for her boss, the Duke. But he wants the Countess, and the Countess wants Viola, the servant who presents as male. This is the definition of a love triangle, and it’s timeless fun.

There’s a side story to “Twelfth Night”, one of many diversions. Viola is unaware that her twin brother Sebastian (Nic Moore) has survived a shipwreck and is not dead. He likewise thinks his sister perished in the storm. When he appears, late in Act II, the Countess again pursues him, thinking he is the same servant Viola, a young man. Sebastian is confused but flattered and accepts the marriage proposal from the attractive Countess. Apparently twins are interchangeable, regardless of gender. [Editor’s note: This comedic gambit probably won’t fly in the current cultural climate. – BW]

This leaves Viola free to disclose that she is really a young lady of noble birth, and would happily marry the Duke. He accepts and all turns out just hunky-dory. Did I mention this is a comedy?

Director Michele Delattre manages to keep the story lines entertaining, despite the large cast of characters who bounce in and out using antiquated language. Several standout spots add up to make “Twelfth Night” a worthwhile afternoon:

Faryn Thomure sings “Thorns Among the Roses” with her maidservants (energetic Lindsey Abbott and Clara Desmond) in a lovely trio of harmony. Abbott is amusing with her spot-on characterizations as a scheming lady’s maid.

Local veteran Grey Wolf came out of retirement to add mirth to his outlandish role as Malvolio, he of the yellow socks and garters.

And what is Shakespeare without a swordfight? Steve Beecroft expertly choreographs not one but two rapier clashes in Act II. Bloody wounds show up later, but nothing to faint about.

Feste, the Fool, enacted by a wickedly talented Heather Cherry, carries the plot and the humor throughout. She wryly observes “Some are born great, some achieve greatness, and some have greatness thrust upon them.” So it is with “Twelfth Night.”

The show plays at 2 PM through September 6th on Saturdays and Sundays and Labor Day Monday. Admission is FREE.

For more information to www.curtaintheatre.org. Open seating, picnics welcome, cookies, snacks and coffee available for purchase, and chairs are provided on a first-come basis, or bring your own. Dress in layers as the redwood grove in southern Marin can be much cooler than expected with the fog.

Donations are accepted with gratitude.