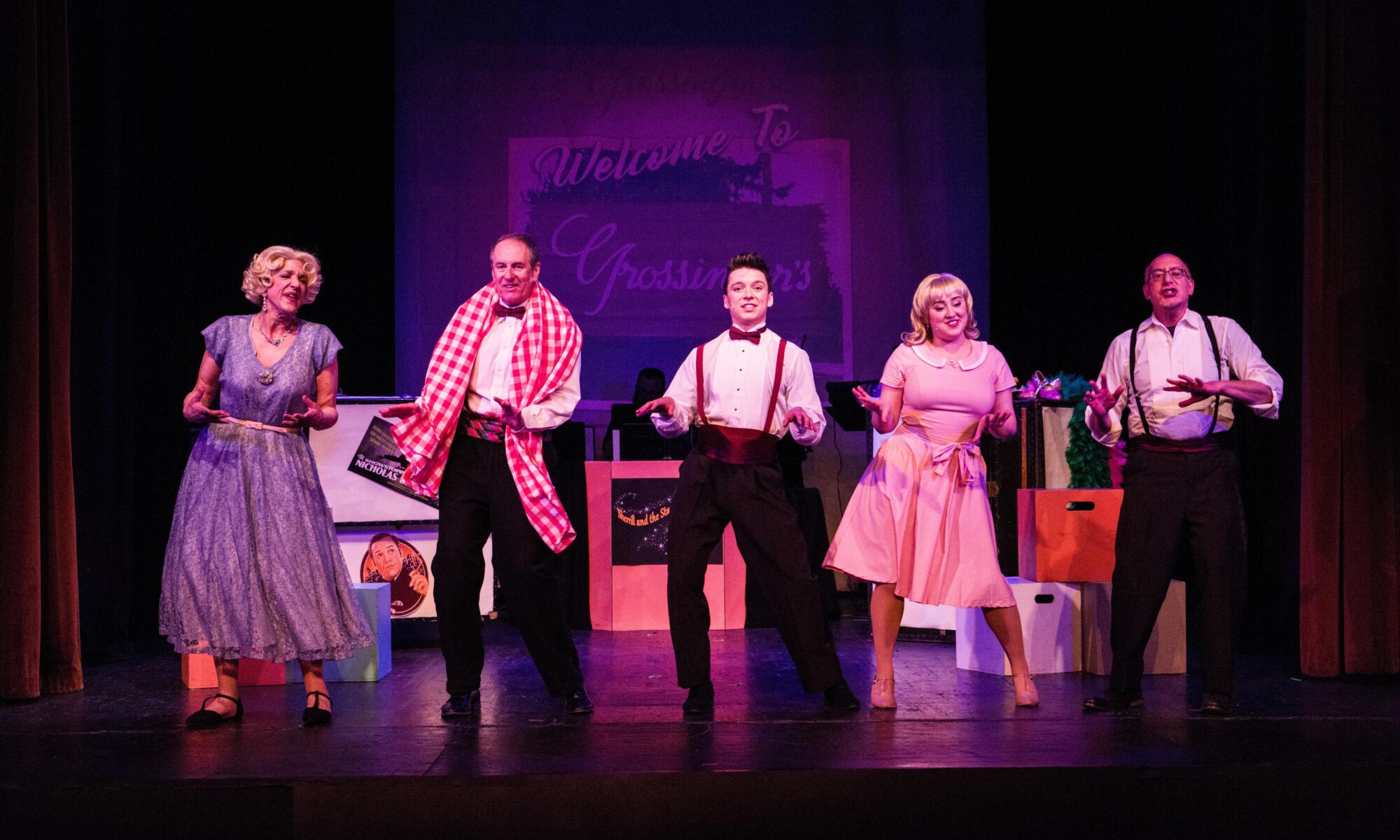 The Catskills mountain region in upstate New York made substantial contributions to American culture throughout most of the 20th century. Many legendary comedians and musicians worked “Borsht Belt” resorts such as the one brought to life by Sonoma Arts Live with its new production of the Stephen Cole musical “Saturday Night at Grossinger’s.” Cole is the show’s librettist/lyricist; the music is by Claibe Richardson with additional lyrics by Ronny Graham.

Dani Innocenti-Beem solidly anchors the show as the entrepreneurial singer/comedienne Jennie Grossinger, who almost single-handedly converted what had been a rundown farmhouse into one of the most recognized and desirable vacation destinations in the eastern U.S. In a short silver-gray wig, she commands the stage whether singing, dancing, or riffing on the circumstances around her.

Larry Williams, the show’s co-director with Jaime Love, is also formidable as Sheldon Seltzer, the resort’s announcer/master of ceremonies/fallback comedian. He’s heavy on Henny Youngman-style wisecracks such as “Take my wife. She runs after the garbage truck shouting ‘Am I late for the trash?’ The driver shouts back, ‘No, jump in.’”

…a delightful morsel of musical theater….

Innocenti-Beem and Williams are both gifted and confident comedic performers. Their appearance together on the same stage guarantees a good time for the audience—whether the comedy is intentional or not, as happened on opening night with a balky curtain. The pair covered so well that most folks in the nearly sold-out house believed the curtain glitch was built into the script. It wasn’t, but perhaps Stephen Cole should consider making it so. The perfectly-timed incident certainly seemed like something that might have happened infrequently at Grossinger’s, and it provoked plenty of laughter.

The substantially-constructed first act is a decade-by-decade revisiting of the history of Grossinger’s, from its 1904 origins through the 1960s. Musical director Sherrill Peterson and her band provide excellent backing for the all-singing/all-dancing Grossinger clan: Dan Schwager as patriarch “Papa,” David Shirk as Jennie’s mate Harry, and HarriettePearl Fugit and Tommy Lassiter as Grossinger offspring Elaine and Paul, respectively.

With its compelling and perfectly paced scene-by-scene through-line, the show’s opening act induces strong anticipation in the audience, who come back from intermission expecting a big payoff. The second act doesn’t fulfill this expectation. It feels under-developed, as if some story elements were left dangling or cut without consideration for how this might affect the entire production.

The result is that the show seems to end abruptly, frustratingly so for the audience, as our very entertaining history tour of Grossinger’s doesn’t reach into the 21st century. Act One has a strong dramatic arc sorely missing in the second one. Maybe that will be corrected in the sequel: “Saturday Night at Grossinger’s, Part Two,” but even incomplete, SAL’s show is a delightful morsel of musical theater.