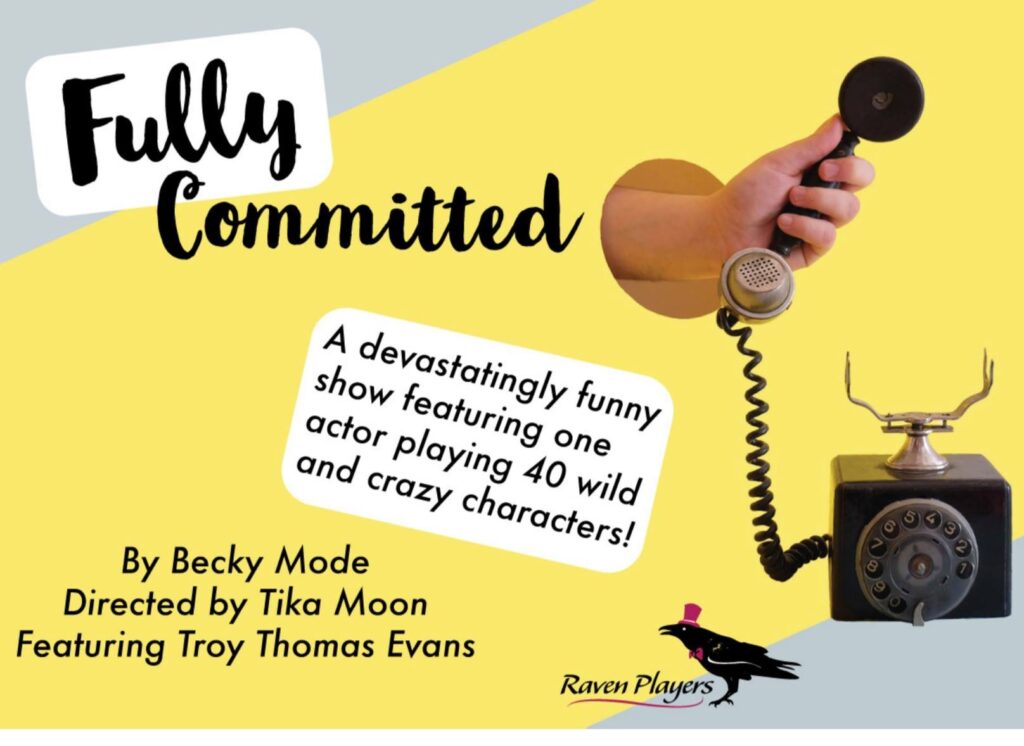 A day in the life of a harried scheduling manager makes for some uproarious comedy in “Fully Committed,” at the Raven Performing Arts Theater in downtown Healdsburg, through October 17.

The telephone equivalent of a slamming-door farce, the production requires its lone onstage talent to dash from one telephone to the next—three internal lines at opposite ends of the wide stage, and two or three on his desk. Plus his personal cell phone. It’s a lot to keep track of, especially when they ring in rapid succession or in unison.

Troy Thomas Evans plays the roles of everyone working in a trendy New York restaurant—chef, maitre d’, front-of-house staff, and an absent co-worker, plus his own father, and dozens of pesky would-be patrons who refuse to take “I’m sorry—we’re fully committed” as an answer when they try to make reservations. Evans is energetic and convincing as Sam, a hopeful young actor trying to land a gig at Lincoln Center, and to arrange time off to spend the Christmas holiday with his family.

He conveys all of this effectively; some of his characters (Bunny VanDerveer, Bryce from Gwyneth Paltrow’s office, the dreaded Ned Finley) are outrageous while others are merely amusing. His performance is hampered by the need to scramble from one side of the stage to the other, because director Tika Moon insisted on using the entirety of the wide stage as the restaurant’s basement office, a space that in the real world would be almost unbearably cramped, the way other productions’ set designs usually have it.

Net result: this “Fully Committed” runs more than two hours —no intermission— vs. a typical production’s 90 minutes. It’s still a delightful show earning Evans a big thumbs-up as a comedic performer. Plus it’s great that live theater has returned to downtown Healdsburg, which was bustling on opening night. The October 16 production will also be livestreamed.