Corporate training sessions and their inevitable Power Point presentations are among the most dreaded rituals of modern life. Drag performer Michael Phillis must have endured dozens of them to come up with Patty from HR: A Zoom with a View, at Sebastopol’s Main Stage West through September 11.

Written, directed, and performed by Phillis, A Zoom with a View skewers the idiocy of technological culture—including, thank you very much, the irksome speech patterns of millennials. In a quick-moving one-act, Phillis’s self-deprecating Human Resources manager Patty covers everything from the early days of Netscape and dial-up modems to the present day of full-time social media as she stumbles through an inept introduction to Zoom video meetings, the bane and the salvation of many home-bound office workers during the Covid crisis.

It’s a lot to cover in only 70 frenetic minutes but Phillis does it with a delightful, goofy grace…

Her tattered Dress Barn business suit and frazzled 80s hairstyle serving as visual testament to decades spent toiling in the corporate trenches, Patty dances around the idea of Zoom, and Power Point too, and the longer she goes on, the clearer it becomes how little she actually knows about either. Imagine Dana Carvey’s “church lady” jacked up on caffeine, adrenaline, and perhaps just a tidbit of stage fright. Patty’s a corporate train wreck and you simply can’t look away. 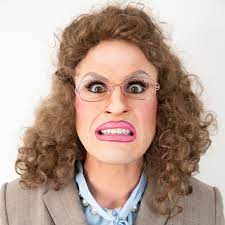 When she stumbles (often) she gets plenty of coaching from an unseen tech assistant, whose annoyed comments act as punctuation for Patty’s non-stop blather, directed scattershot at herself, her audience, and her corporate overlords. It’s a lot to cover in only 70 frenetic minutes but Phillis does it with a delightful, goofy grace that earned plenty of laughs and sustained applause on opening night.

Main Stage West co-artistic director Keith Baker enjoys a cameo as “Kevin,” an underling who supplies her with props. Patty is never quite sure about names, a running gag throughout the show, and of course, a detriment for any human resource professional. That’s one of many repeated themes tightly woven into the fabric of this expertly conceived and executed production, its three-week run an injustice to its comedic brilliance.

A Zoom with a View runs Thursday-Friday-Saturday at 8 pm through September 11, with a 5 pm matinee Sunday September 5.