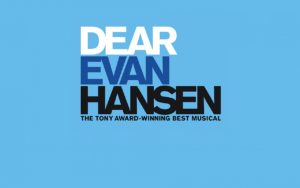 Multiple Tony Award winner “Dear Evan Hansen” has finally landed in San Francisco, after a legal tussle between the Curran’s Carole Shorenstein Hays and her former partners The Nederlander Organization. Much-anticipated, the show lives up to its reputation, with excellent performances and stunning stagecraft that make this first Millennial musical an immersive experience.

At its core a simple story about a withdrawn, socially inept high-school boy (Ben Levi Ross, most performances) whose gift for writing has good and bad repercussions, the show is also about family relations—the lead character lives with his single mom Heidi (Jerssica Phillips), who works tirelessly to improve herself and the life of her son, while having little time to interact with him. 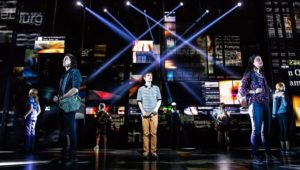 It’s also about the intensity of life lived via social media as experienced by young people. Covering the entire stage for much of the show’s two-and-a-half hours, Peter Nigrini’s astounding projections go a long way toward conveying just how intense, immediate, and all-consuming such life can be. The music—also award-winning—is brash, loud, and louder, with only a couple of tender moments. Most of the songs in the first act are shouted more than sung.

Phoebe Koyabe does a fine job as Alana Beck, one of Evan’s classmates and a self-appointed busybody who both encourages his subterfuge and later exposes it. Jared Goldsmith appears as Jared Kleinman, an obnoxious classmate and possibly Evan’s only friend.

The show’s production values are exceptional, but in style it bears a striking resemblance to “Next to Normal,” possibly the worst musical ever conceived. The resemblance is no accident; both shows were helmed by Micheal Greif. Stripped of its glitz, the story would make ideal material for a Hallmark or Lifetime made-for-TV movie.

There are two moments that could use a rewrite: one is the scene where Larry, in surrogate father mode, shows Evan how to break in a baseball glove, something that in a film would be conveyed with a couple of soft-focus shots, but here it demands an entire song (“To Break in a Glove”). The other false moment comes when Larry and Cynthia attempt to befriend Evan’s mother, offering to fund his college education with money they have saved for Connor’s. Instead of being appreciative, Heidi gets incensed and insists that he’ll go to community college until she can afford to send him someplace better.

It’s mostly an exercise in psychological torture for poor Evan, but his misguided efforts—aided by Alana and Zoe—have an unpredictable and somewhat upbeat payoff, even if it isn’t happy-ever-after. “Dear Evan Hansen” is an emotionally exhausting production—not necessarily for the audience, but certainly for the performers, with nine shows per week. Their commitment to the show and the extraordinary level of stagecraft supporting it make “Dear Evan Hansen” quite a justifiable ticket purchase.