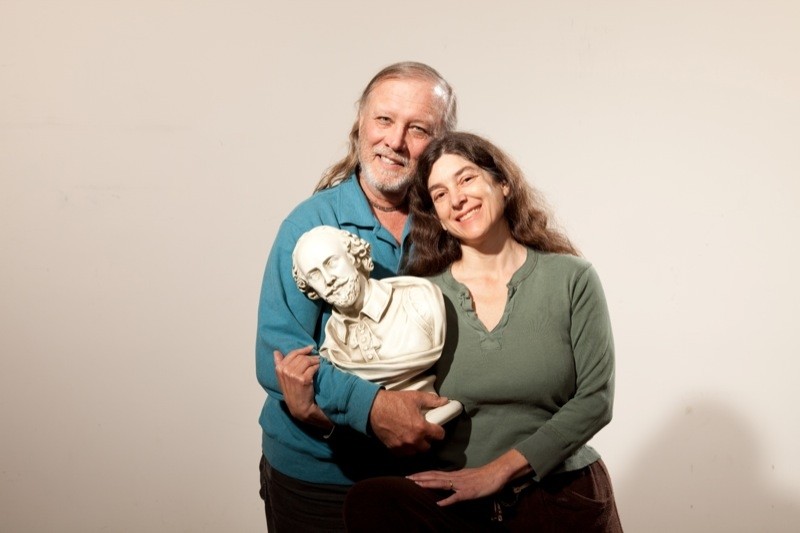 Lesley: My grandmother was a professional actress and my mother a drama teacher. Even with that heritage, I’m the only one of my siblings who went into theatre. In first grade, I was Gretel in a school production of Hansel and Gretel.

Bob: I started in second grade, as the Narrator of Little Toot. In high school, I did a lot of sports, but rediscovered the allure of theatre when at UC Irvine. I was studying Political Science, but the theatre building was always lit up at night and that’s where all the cute girls were. So it was back into theatre for me! My first role there was in Oh What A Lovely War. I went on to the get the first MFA in Directing that UCI ever granted.

Lesley: I was cast as a Lady in Waiting to Queen Gertrude in a professional production of Hamlet while an undergraduate at Princeton University. Harry Hamlin starred as the prince. I invited him for a meal at one of Princeton’s famous Dining Clubs, and in return he took me out for a really good dinner at a local restaurant. That was a rare treat in college. Bill Ball, Harry’s mentor at the American Conservatory Theatre (ACT), saw the production and thrilled me by telling me he understood the whole tragedy of the play through my reaction to Gertrude’s death.

Bob: I was paid to direct The Little Prince in 1972 at the Woodstock Opera House. It was the artistic home of a young Orson Welles.

Lesley: I joined ACT one summer during college where I fell in love with the Bay Area. After college, I stumbled upon the Ukiah Players Theatre, where I met Bob. He took me to the Oregon Shakespeare Festival in Ashland, which I’d never heard of. I auditioned there and was cast as a Fairy in A Midsummer Night’s Dream. Back at UFI, while working towards my MFA in theatre, I appeared in Hard Times at South Coast Repertory Theatre. It was a very long show which we performed 8 times a week, made more intense because I was nursing my first-born son.

ASR: Marin Shakespeare Company is your present company. What’s the history on that?

Bob and Lesley: In 1989 we got a call out of the blue asking if we would like to come to Marin to revive Shakespeare at Forest Meadows. The Forest Meadows Amphitheater was purpose built for the original Marin Shakespeare Festival in 1967, after it moved from its original home at the Marin Art and Garden Center, where it had begun five years earlier. The Festival’s last year at this Dominican location was 1972, due to a fire and some other questionable activities by art-loving hippies running around in the forest.

ASR: Did you anticipate Marin Shakespeare Company would become as successful as it has?

Bob and Lesley: Back in 1989, we hoped we’d be able to build a theatre company that would last for generations. We never dreamed that 30 years later we’d be pioneering Shakespeare in Prisons, or working with formerly incarcerated actors, or building an indoor Center for Performing Arts, Education, and Social Justice.

ASR: Does your company have a special focus?

Bob and Lesley: Obviously, our focus is Shakespeare. But we’ve produced lots of other shows that are in some sense “classical” or appropriate for outdoor summer theatre. Since 2003, we’ve grown to become the largest provider of Shakespeare in Prison programs in the world. We’ve created an online video archive of over 50 performances in prisons, despite the massive logistics to do so. We can share these inspiring videos without violating any Actors Equity rules which do restrict our main stage performance videos.

ASR: It will likely be several months until theaters reopen. How is your company coping with the shutdown? What does the future look like?

Bob and Lesley: Sadly, we just announced that we are postponing our 2020 season to 2021. We don’t think it will be truly safe for actors or audience members to share theatre this summer.

During the shutdown, we stay busy, very busy, with many projects. Earlier this year we began renovations of the Forest Meadows Amphitheater, which were delayed due to Sheltering in Place. We’ll use the summer of 2020 to complete the renovations before welcoming audiences into a beautifully face-lifted venue next year.

We provide on-line MSC Education Programs and summer camps, and Alternative Programming for each of the prisons where we work. We’re continuing our plans for the Center for Performing Arts, Education, and Social Justice at 514 Fourth Street in San Rafael. We’re working to provide income opportunities for artists, and our staff is completing a number of “house-cleaning” and back-office tasks to make us stronger than ever when we’re able to return to full capacity.

ASR: Almost forgotten with the pandemic is the crisis caused in the performing arts by the passage of Assembly Bill 5, requiring most workers to be paid the California minimum wage. How has AB5 affected your theater company’s plans?

Bob and Lesley: Several years ago, we started transitioning independent contractors to employee status. With AB5, we plan to make the last group of former independent contractors – non-Equity actors – employees for the first time. We estimate that this will incur an increase to our budget of approximately $60,000. We know it’s the right thing to do.

ASR: Which rare theatre gem plays would you like to see revived?

Bob and Lesley: The three parts of Henry VI. But we know we wouldn’t sell many tickets!

ASR: What is Shakespeare’s most underrated play? Why?

Bob and Lesley:  King John – if you saw our production, you’d realize how much great comedy there is in it, in addition to superb characters and great themes.

Bob and Lesley: Scott Coopwood just keeps getting better and better. We were honored to give him his first Bay Area acting contracts.

Bob and Lesley: Honesty and integrity. Passion for the work. Persistence and Diligence – be ready to put in a lot of hours!

ASR: The most excruciating screw-up you’ve seen on stage?

Bob and Lesley: The actor who showed up covered in poison oak and still had to put on his make-up and do his part. We always tell the actors to stay out of the poison oak!

Bob and Lesley: A female audience member flashed an actor once during one of those “audience participation” moments when the actors ask an audience member to respond – it stimulated audience hooting and hollering for several minutes. It was a lot of fun.

ASR: Do you have a “day job?” What are your interests outside of theater?

Lesley: I work about 80 hours a week for Marin Shakespeare Company. My “day job” is being a mom and grandmother. My hobbies include tile mosaic and free-form dance.

Bob: I’ve done a lot of building and guest directing for other theatres over the years. I love to build things around the house, travel, and be Bopo to my two adorable granddaughters who live in San Rafael.

ASR: You have the opportunity to create a 30-minute TV series. What’s it called and what’s the premise?

Bob and Lesley: “Jeers” with a bunch of characters hanging out in a theatre bar.

Lesley: I’m a coward, but I do spend a lot of time in prisons, and I hang-glided once and didn’t throw up.

Bob: I enjoy snorkeling and driving my ancient Alpha-Romeo, and I just hiked for two weeks in Japan with my youngest son.

Lesley: Hamlet — “The rest is silence.”