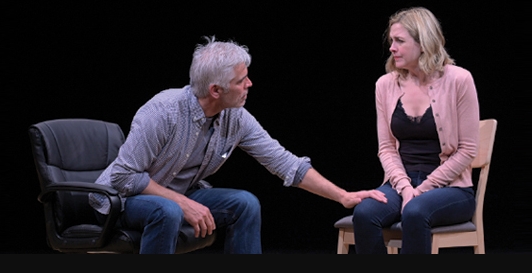 Marin Theater Company presents the world premiere of Kate Cortesi’s riveting drama “Love” with a keen eye on the #MeToo movement. The play is no feminist rant; rather it is a balanced unfolding of a relationship that flashes back in time to romance, power, and inappropriateness.

It’s the present, and Penelope, launched on her own successful career, is contacted by a former co-worker friend who has charged their former boss with crossing the sexual harassment line. It’s been 15 years since Penelope has thought about her love affair and the sexual awakening she shared with her married boss, who remains her friend. Penelope is launched into soul-searching about the roles defining victim and perpetrator. It’s her moral dilemma whether to support the charges, to speak out and add her voice to the others.

This two-hour production will give rise to many conversations…

Clea Alsip does a fine job as the ingenue Penelope and R. Ward Duffy is strong and confident as her boss Otis. The stage is spare; their conversation fills the empty space with tension. They are fencing with one another, parrying and thrusting as the audience perches, watching for the next move.

“Love” is extraordinary for its abundance of nuance and moral confusion. Is any workplace attraction allowable? Is it all black and white, okay and not okay, cut and run? The playwright herself notes, “Inappropriateness could feel wonderful and then turn unsettling, and wrong.”

The sterling cast directed by Mike Donahue includes Penelope’s husband Jaime, played by Bobak Cyrus Bakhtiari, with Rebecca Schweitzer as the co-worker friend Vanessa. Robert Sicular and Mari Vial-Golden each double up their supporting roles with such skill they seem to be additional characters onstage.

What will Penelope decide to do with her options to testify? Will her stalwart faith in the absolute truth trump her past youthful pleasures? If there was love, was it consensual, and will justice outdo it?

This two-hour production will give rise to many conversations. Audiences may or may not agree with Penelope’s decision, but they will understand the strength behind her reasoning.