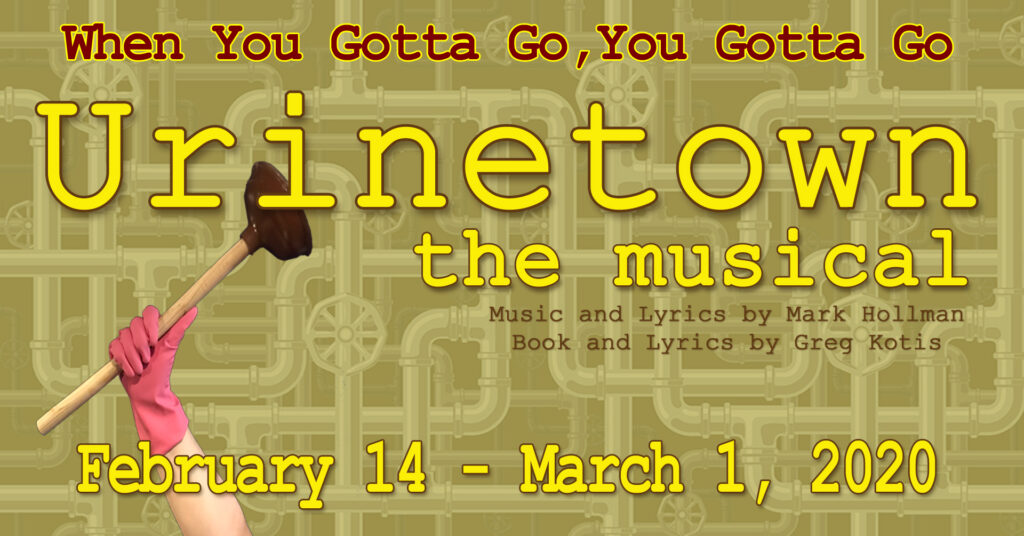 Paying to pee is a way of life for the poor and downtrodden in the fictional neighborhood of Urinetown. Managed with mendacity by water-and-waste management firm Urine Good Company, “amenities” dot the urban landscape, with admission fees so high that residents scramble all day to get enough money to relieve themselves—a high-pressure situation that foments rebellion if not resolution.

At Spreckels Performing Arts Center through March 1, “Urinetown, the Musical” celebrates many of the conceits of traditional musical theater while skewering others. The familiar plot elements—oppressive overlords, rebellious poor, star-crossed lovers from opposite sides of the conflict, a desperate kidnapping—have all been exploited by playwrights for centuries.

What makes this darkly-themed show unusual is its coupling of these reliable plot elements with upbeat Broadway song-and-dance productions, and its self-conscious stance as a piece of “metatheater” that announces itself and its intentions directly to the audience through UGC’s chief enforcer Officer Lockstock (David L. Yen), whose main connection to the Urinetown residents is through the likable character of Little Sally (Denise Elia-Yen).

“Urinetown, the Musical” is tremendous production…

Theater fans of long experience will note similarities in theme, plot, characters and music with many other productions. “Urinetown” is in solid traditional territory there.

Tim Setzer shines as UGC’s evil chief executive Caldwell B. Cladwell, the “toilet tycoon,” as described by ASR critic Nicole Singley. His toady-laden office includes Senator Fipp (Michael Arbitter), a legislator doing his patriotic best to win congressional approval for a system-wide increase in toilet admission fees. Recently graduated from the world’s most expensive university, Cladwell’s beautiful daughter Hope (Julianne Thompson Bretan) is about to join her father’s management team but is taken hostage by restroom-deprived rebels. In the process, she develops sympathy for their cause—mirroring the real-world fate of newspaper heiress Patricia Hearst in a 1974 kidnapping staged by would-be revolutionaries—and falls in love with their charismatic leader Bobby Strong (Joshua Bailey).

The stark set by Eddy Hansen and Eliabeth Bazzano is the perfect venue for this musical misadventure, enhanced by projections from Chris Schloemp.

Lucas Sherman’s small orchestra is dazzling. Performances range from good to superb, with especially good efforts by Bailey and Bretan, Yen, Setzer, and Karen Pinomaki as Josephine Strong, Bobby’s devoted mother. ScharyPearl Fugitt is a standout as Urinetown rebel Soupy Sue, and as Cladwell’s secretary. Her dancing is especially enjoyable. A large and exemplary cast fills out the remaining roles.

“Urinetown, the Musical” is tremendous production—not perfect, but huge fun with a depressing message at its core: sugar-coated theatrical medicine. Yes, resources are shrinking and the population is growing. It’s not a pleasant prospect, but we can all delight in the irony as we head for the abyss.