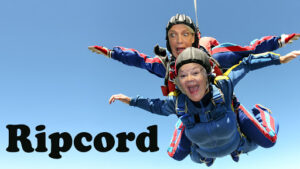 Two widows battle for control of a room in a residential retirement center in “Ripcord” at Cinnabar Theater through February 16.

Laura Jorgensen and Kate Brickley star as combative roommates Abby and Marilyn, respectively, in David Lindsay-Abaire’s elegantly conceived comedy. Author of “Good People,” “Rabbit Hole,” and many other excellent plays, Lindsay-Abaire is at the top of his game in this “Odd Couple”-inspired story of a cranky loner (Abby) and her attempt to drive out her ceaselessly upbeat roomie.

With momentum like a speeding truck, the script’s inherently compelling pacing is made more so under the brilliant direction of James Pelican, who gets his talented six-member cast to hit every beat at precisely the right moment. It’s one hilarious ride, with moments of melancholy as texture and spice.

…what may prove to be one of the most uproarious comedies this season!

Jorgensen and Brickley are perfectly cast, supported by Kyle Stoner as Scotty, the long-suffering orderly who brings them their meals and medications and tries his best to keep the two from each other’s throats. Sarah McKeregan and Chad Yarish are superb—and superbly funny—as Marilyn’s daughter Colleen and son-in-law Derek, among other roles, while the versatile John Browning appears as each woman’s adult son, a bit of casting that may induce confusion in some viewers. Even so, the cast of “Ripcord” is among the most evenly-balanced to appear onstage so far this year.

Scenic designer Joseph Elwick’s quick-change sets help propel the story, which includes a sky-diving adventure—hence, the title—that’s part of Abby and Marilyn’s continually-escalating series of challenges to each other. Will they go down fighting or learn to live not-so-happily ever after? Closing weekend will reveal all to those quick enough and lucky enough to score tickets for what may prove to be one of the most uproarious comedies this season.