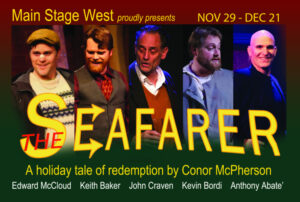 The stereotypical Irish affinity for alcohol, self-delusion, and self-defeat gets fully exercised in Conor McPherson’s “The Seafarer,” at Main Stage West through December 21.

It’s Christmas eve, 2007, in a shabby residence (set design by director David Lear) in a small coastal town north of Dublin. Four buddies have gathered for a night of blarney, heavy drinking, and card games, with a fifth guest named Mr. Lockhart (Keith Baker) who may or may not be the devil incarnate. The four friends—Nicky, Richard, Ivan, and Sharky (Anthony Abate, John Craven, Kevin Bordi, and Edward McCloud, respectively)—spend the entire first act getting hammered and regaling each other with long-winded and elaborate tales about very little. It’s a long setup.

In the second act, they get down to business with a poker game in which they bluff not only about the cards they hold but about their generally miserable existences—bluffing exacerbated by their sharing a treasured bottle of high-octane liquor, as the financial and psychological stakes rise.

The stakes reach a fever pitch during a lull in the game—with the other three out of the room, Mr. Lockhart torments Sharky with a hideously frightening description of eternal damnation. Then they reunite around the table for a few final rounds of cards, in which their true characters are revealed to be as empty as their pockets. None of them are likable—Nicky, for example, admits that he has only thirty-five euros to last until January, and that he ought to be at home with his wife and kids, but he can’t resist gambling more than he has on one last desperate hand. Ivan likewise wrestles with how he’s going to explain his absence from home. Richard, Sharky’s brother and literally a blind drunk, takes great delight in tormenting his friends, as he has throughout the evening.

Altogether, it’s an unpleasant story about unlikeable losers, not one that would normally earn a recommendation, but it’s a stunning ensemble effort by five extremely talented actors. All are 100% committed to their characters and 100% committed to telling McPherson’s tale as well as it can be told. In that sense, “The Seafarer” is an exemplary production—a master class for aspiring actors, but not the sort of production that ordinary theatergoers will gush about to friends. If you’re seeking something to brighten your day or a tune to whistle on the way home, this isn’t it.