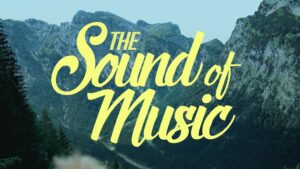 One of the most beloved musicals of all time is enjoying a sumptuous revival at Sonoma State University’s capacious Evert B. Person Theatre through December 8.

With its own theater facilities still under renovation, the Santa Rosa Junior College Theater Arts department has teamed up with its counterpart at Sonoma State University to put on a hugely ambitious and mostly successful production of “The Sound of Music,” the Rodgers and Hammerstein classic about the Austrian von Trapp family and their escape from Nazi oppression shortly after the Germans annexed their country. It’s also, of course, the story of Maria Rainer (Arianna LaMark), the perpetually upbeat would-be nun who becomes governess to the seven von Trapp children, and ultimately, the wife of their widowed father, Captain von Trapp (Michael Coury Murdock).

The show is rampant with tunes that won instant popularity and continue to be favorites today: “The Sound of Music,” “My Favorite Things,” “Do-Re-Mi,” “Sixteen Going on Seventeen,” “How Can Love Survive?,” and “Climb Every Mountain,” all of them performed brilliantly by a huge cast on a huge stage, backed by a superb ten-piece orchestra led by music director Janis Dunsun Wilson. Everything about this show is enormous, from the steeply-raked large-capacity Person Theatre to the fantastically oversized stage set and towering backdrop on which is projected an image of the Matterhorn as it looks at various times of day and night—set and projection design by Peter Crompton. 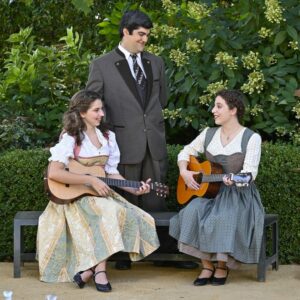 Director Laura Downing-Lee has coaxed a wonderfully engaging performance from her cast of nearly three dozen performers, all of whom deliver without a bobble. Vocal performances are tremendous—LaMark and Murdock excel here—and the acting is almost as good, with the best performances given by Heather Buck as Elsa Schrader and Crystal McDougall as Mother Abbess. LaMark wins hearts with “The Sound of Music,” “My Favorite Things,” and several other songs, while Murdock prompts tears with his treatment of “Edelweiss” in the penultimate scene. Madigan Love is excellent as Liesl, the oldest of the von Trapp brood, although her handling of the guitar makes it appear as if she’s just discovered the instrument.

There are a couple of unfortunate glitches that detract from the pervasive magic, especially the fact that the backdrop isn’t stretched tight enough to avoid billowing. When it does, the Matterhorn appears to be breathing. A bit of a letdown comes at the end, when the von Trapps decide to strike out on foot through the mountains to Switzerland. Downing-Lee wisely has them tackle the steep stairs out of the theater—in the dark, as must have happened in real life—but a bit of subdued lighting on them as they climb would heighten the drama. The same is true when they reach the top and look back at their home. Instead of simply standing there in the dark then leaving through an “Exit” door, they might linger for a moment behind a bit of set indicating that they’ve reached Switzerland and freedom.

But those are small suggestions intended only to take this already tremendous production one notch higher. Even without them, it’s guaranteed to please. “The Sound of Music” is among the greatest feel-good shows of all time; SRJC’s affordable tickets make this version an absolute bargain.