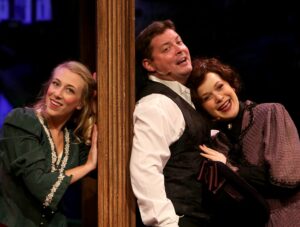 Michael Ross directs this hilarious and campy musical at Spreckels Performing Arts Center’s Codding Theatre. The plot is immediately intriguing: impoverished Monty (well-cast in Andrew Smith) discovers he has an aristocratic birthright, making him ninth in line to inherit both title and fortune.

How did that happen? Turns out Monty’s noble-born mum had been rudely disinherited, and kept mum about it. His lady-friend Sibella (Madison Genovese) ignores poor Monty as she prefers a more financially secure suitor. Can Monty move up the inheritance list quickly enough to win her hand? Can he bump eight dismissive and nasty relatives off the queue?

And what relatives they are! Tim Setzer, a talented veteran actor, clearly has a ball playing every one of the noble-born inheritors…including a female. It’s worth the price of admission just to watch him change personalities and voices as he doffs another costume. 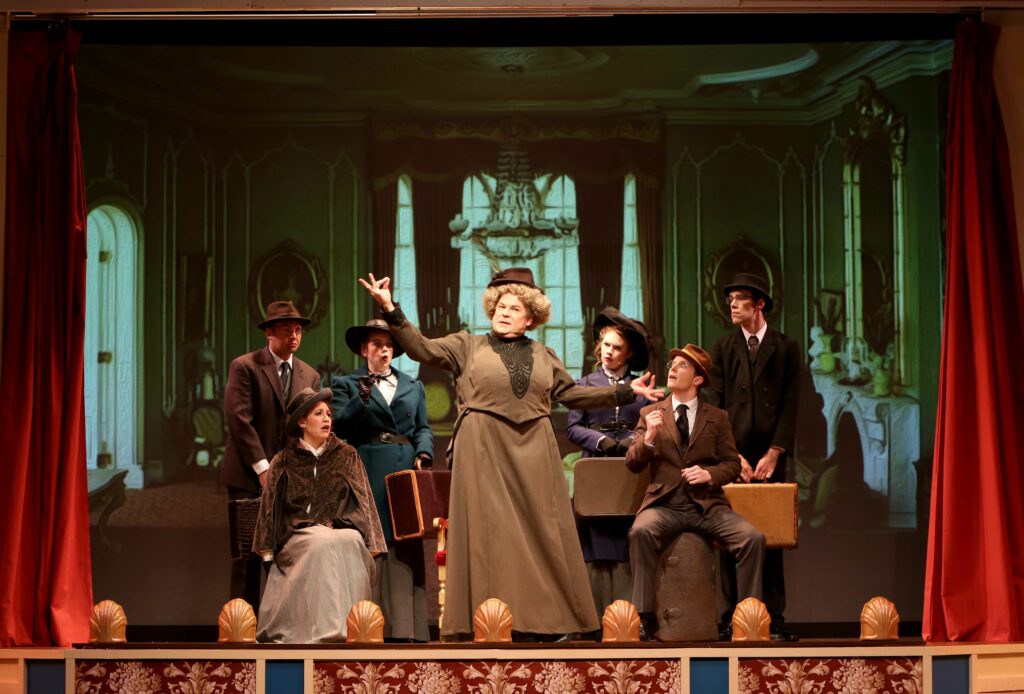 “A Gentleman’s Guide” won four Tonys when it hit Broadway in 2014, including Best Musical. Gilbert and Sullivan might have been proud of the operetta-style music and lyrics by Steven Lutvak (with additional book and lyrics by Robert L. Freeman.) Several songs have a patter-singing character to cleverly move the plot along.

Act II has a particularly engaging number “I’ve Decided to Marry You.” While Monty hides his lover Sabella behind one door, his marriage-manic cousin Phoebe (lovely soprano Maeve Smith) embraces him behind the other. The trio has the comic chops and strong vocals which brought a cheer from the audience.

In further homage to G&S, “A Gentleman’s Guide” has several surprises and an amusing twist at the end. The musical is appropriate for all ages, despite the rather macabre story line. No blood, thank you, except for the blue kind.

The set is a stage on the stage, opulently designed by Elizabeth Bazzano and Eddy Hansen. Codding Theatre takes it a step further, maximizing their rear-projection screen to depict scene changes. Ice skaters cruise back and forth. Bees swarm. Tourists take tours of the mansion. Underneath it all is the 12-piece orchestra conducted by Jim Coleman.

“A Gentleman’s Guide” is morbidly delightful fun that’ll just kill you with laughter.