If you’re looking for a wild and sex-crazed show filled with energy and imaginative characters, go see “The Rocky Horror Show” produced by the Marin Musical Theatre Company.

It’s become a cult tradition to shout key lines at the actors at this outrageous show, based on the 1975 musical horror film. The MMTC program helpfully provides an audience participation script, as well as an etiquette guide with behavior rules, to keep rowdies from ruining the fun for everyone.

This is not a performance for children. Expect a young crowd of Millennials and a raunchy Act II to remind you this isn’t your grandma’s evening at the theatre. And don’t bring Grandpa, especially if he has a heart condition. 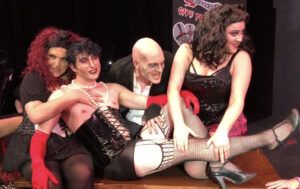 Cast members are dressed, or rather undressed, in racy attire. They coach the audience to holler out “Asshole” when Brad (perfectly cast Lorenzo Alviso) appears. Janet (played by Jenny Boynton, who also directed this show) has the shouted moniker “Slut”. The crowd hoots loudly and the partying begins.

Those who have never been to a live performance of “The Rocky Horror Show” might take a while to warm up to the idea of sexual perversion as humor, but that’s the nature of this show. A glass of wine or beer helps!

As the story of this bizarre journey begins, it follows straight-laced Brad and Janet whose car breaks down near a strange mansion opened by an even stranger ghoul, Riff Raff. Nelson Brown outdoes himself in this smarmy and lecherous role. He’s keen to have elbow sex with Magenta, acted and sung by the powerhouse Dani Innocenti Beem. These two get everyone charged up when they do the “Time Warp” again.

Already bursting with sensual anticipation, the audience explodes when Dr. Frank-N-Furter enters. Jack Gale is the ballsy and brassy “Sweet Transvestite from Transylvania.” He casts his spell in a corset and lustful smile…a trouper with great singing chops.

Out comes Rocky, the golden boy enacted by brawny and beautiful Michael Lamb. Females swoon at sight of him, but the males do, too. What obscene scene will come next?

Amidst this chaotic depravity, Daniel Savio directs five talented musicians who underscore Katie Wickes’ choreography. Several set-ups, like the ensemble performing as Brad and Janet’s car, are quite clever.

“The Rocky Horror Show” does not allow children under 13, as MMTC rates it a “strong R.” Indulge in this riotous and ribald experience through Halloween, October 31st.