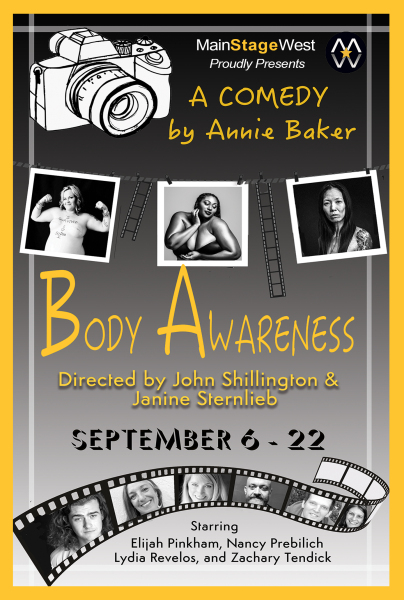 Lydia Revelos stars as Phyllis, the professor with ultra-orthodox feminist convictions, who first organized the event as “Eating Disorders Week” but expanded it to include dance performances by troupes from across the globe, and seminars on personal and social perceptions about the human body—in particular, the female body. This emphasis includes an exhibition of photos of nude women of all ages, done by a straight male photographer.

The photos, their subjects, and most of all the photographer’s gender, enrage her and cause upheaval with her lesbian partner Joyce (Nancy Prebilich), a high school teacher whose almost-adult son Jared is “on the Asperger’s spectrum” as it’s trendy to say. Jared (Elijah Pinkham) is a self-described “auto didact” obsessed with word origins—he aspires to be a lexicographer—and sex with girls, which he has never experienced. His awkward social skills exasperate his mother and her partner, get him fired from his minimum-wage job at McDonald’s, and nearly land him in jail when he does something incredibly inappropriate with a girl he’s just met.

Domestic disruption grows exponentially with the appearance of photographer Frank (Zachary Tendick), a surprise guest in their home for the week. Phyllis can’t stand him nor what he does as an artist—the “male gaze” being the equivalent of an assault, in her view—nor can she understand why women flock to him to be immortalized in photos. She has rigid ideas about how women should present themselves. Joyce, on the other hand, finds him charming, likes his art, and welcomes him as a mentor to Jared.

The four characters form a tight pulsating web that in just under two hours examines self-concept, identity, commitment, family, and personal and artistic freedom. Playwright Baker—known for skewering Vermont’s politically correct culture—treats all of this with a fine blend of disdain, humor, and sympathy.

Directors John Shillington and Janine Sternlieb get marvelous performances from all four performers. Revelos and Prebilich are exceptional in exploring the breadth of their characters’ emotional lives, while Pinkham does a wonderful job in a role that more-or-less repeats one he did in last year’s “The Curious Incident of the Dog in the Nighttime.” Tendick, in his first appearance on stage, anchors the whole affair with a surprising amount of gravitas.

The two shows’ related themes make them an ideal pair for back-to-back viewing. If there were such a thing as a perfectly-matched theatrical double feature they’d be it. Both provide plenty of laughs and plenty to ponder once the laughter fades.