Roger Corman’s 1960 low-budget comedy/horror flick “The Little Shop of Horrors” is a classic of the genre. In the ‘60s and ‘70s it was a staple of late-night TV, inspiring an adaptation as a stage musical by Howard Ashman, with music by Alan Menken.

It’s been in continual production somewhere since it debuted in 1982, for good reasons. The story is cheesy, the characters are as broadly drawn as possible, and the music is absolutely infectious—think “Rocky Horror Show” meets “Grease.” Cinnabar’s current production of “Little Shop” is a tremendously high-energy treatment of this All-American classic, directed by Nathan Cummings and choreographed by Bridget Codoni, running through September 22.

The little shop is Mushnik’s Skid Row Florists, a failing retail business in a decrepit part of the city. Proprietor Mr. Mushnik (played with palpable fatigue and despair by Michael Van Why) prays for a miracle to keep his doors open. His hoped-for miracle appears when needed most— in the form of a carnivorous plant developed by Mushnik’s nerdy assistant Seymour Krelborn (Equity actor Michael McGurk).

Since its intro in 1982, American audiences can’t get enough schlocky story telling entertainment…

The presence of the plant in the shop generates astounding public interest for reasons that no one questions. Seymour names the plant “Audrey II” in honor of his co-worker Audrey (Sidney Raey-Gonzales), a sweetly reticent girl in an abusive relationship with a sadistic dentist, Dr. Orin Scrivello (Keith Baker, superb in multiple roles). 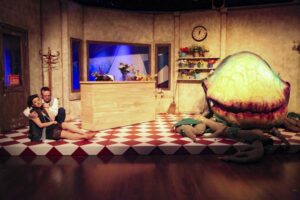 Seymour discovers by accident that the plant thrives on human flesh and blood — and that it speaks, demanding to be fed. Each feeding causes huge spurts in the plant’s aggressiveness and size—it goes from a “strange and interesting” thing in a small pot in the shop’s window to an enormous all-consuming monster that can devour a human in one gulp.

Mushnik’s business enjoys phenomenal growth in direct proportion to the plant’s, from selling a handful of posies each day to supplying all the flowers for the Rose Bowl Parade. Seymour undergoes a similar transition, from perpetually unnoticed back-room nobody to pop star, winning Audrey in the process. Her botanical namesake has solved multiple problems, but as in all monster lore — indeed, as in much of human life — the law of unintended consequences kicks in. Audrey II (voiced by Michelle Pagano, puppetry by Zane Walters — both excellent) becomes a massive problem. Solving it becomes Seymour’s new challenge.

The show’s patently ridiculous dramatic arc is further exaggerated by plenty of upbeat pop music, beautifully sung by Raey-Gonzales, McGurk, Baker, and the “doo-wop girls”: Ronette, Crystal and Chiffon (Selena Elize Flores, Aja Gianola-Norris, and Olivia Newbold, respectively). The trio’s harmonies are marvelous; the three are equally entertaining whether dolled up as an early ’60s girl group or in grunge mode as street urchins, and they nail the choreography. “Somewhere That’s Green,” a sweet invocation of idealized 1950s’ suburban living, is delivered with shimmering conviction by Raey-Gonzales. It’s the emotional high point of the first act.

Baker clearly relishes going over the top as the hyper-caffeinated, charming-but-evil Dr. Scrivello. The ultra-kinetic McGurk is absolutely in his element as Seymour. Raey-Gonzales is commanding as Audrey, with a Brooklyn accent that never falters, even when she’s singing.

Peter Q. Parish has conjured a facile set serving as florist shop and city street, needing only a few brief changes from scene to scene. Their brevity helps propel this quick-moving musical—less than two hours including a fifteen-minute intermission. Hilarious and enthralling from beginning to end, this “Little Shop of Horrors” is an entertainment bargain certain to sell out fast. It’s simply big silly fun, fabulously well done.