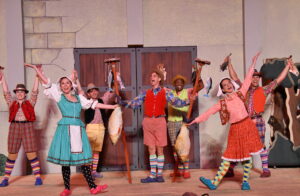 In its 30 years, Marin Shakespeare Company has never presented a full-scale musical. Until now.

The second production in Marin Shakespeare Company’s summer trio of shows, “Spamalot” is the musical comedy written by Eric Idle and “lovingly ripped off” from the zany motion picture “Monty Python and the Holy Grail.” Take Idle’s wit, add John DuPrez’s music, mix in seven musicians, and toss in juicy bits from the madcap screenplay. Sprinkle in new sight gags and you have a riotous musical comedy.

Replete with several outstanding comic performances, “Spamalot” loosely spoofs “Camelot,” the King Arthur legend of Medieval England. Jarion Monroe stars as the would-be “King of the Britons,” who traipses about the countryside with his loyal talking horse Patsy (Bryan Munar), trying to convince hapless peasants to join him in a quest to find the Holy Grail and thereby somehow unite the country.

… a huge production that’s one fast roller-coaster ride of laughter.

The familiarity of several characters fades quickly as the plot takes their character arcs in unpredictable directions. Nonsensical scenes and characters are amusingly disjointed, including one particularly assertive Black Knight (spoiler alert!). The show is full of clever sight gags, hysterical physical comedy, and tons of goofy banter—the Lady of the Lake (Susan Zelinsky), who gives Arthur his mandate and his magic sword Excalibur—is described by one doubtful peasant as “a watery tart.” One hesitates to laugh too long for fear of missing what comes next.

Michael Berg’s colorful costumes are over the top—reportedly totaling 700 pieces if you count each sock and shoe. Choreography by Rick Wallace is the kinetic equivalent, especially some of the large-scale production numbers. You can’t beat a bevy of chorus girls swinging maces for sheer entertainment. The excellent band led by Mountain Play veteran Paul Smith propels the whole affair from just in front of center stage.

Joseph Patrick O’Malley, a languid and fluid actor who first steals his scene with “I’m Not Dead Yet,” pops up in multiple ridiculous guises. The gorgeous Zelinsky sings with power and prominence in Act I, then disappears only to show up in Act II wearing a Norma Desmond-like caftan and turban, wailing “Whatever Happened to My Part?” while “The Song that Goes Like This” will be all too familiar to audience members who’ve seen their share of modern musicals. The finale tune “Always Look on the Bright Side of Life” has the audience whistling along while the chorus line kicks up its boots. Truly a marvelous madcap romp.

Award-winning Marin Shakespeare Company is run by two tireless founders, Robert Currier and Lesley Schisgall Currier, who present an annual trio of outdoor productions at the Forest Meadows Amphitheatre, on the Dominican College campus in San Rafael. One of the three is classic Shakespeare, one is “Shakespeare light” with alternative settings and language, and the third is a production far removed from the Bard’s influence, such as “Spamalot.” All are professionally and energetically presented by a mix of Equity actors and solid local talent, with interns in minor roles.

Director Robert Currier has a long history of updating Shakespearean comedies with unexpected adornments to plot, character, and setting. With “Spamalot,” he started with an outrageous script, and through superb choices in casting and direction has come up with a huge production that’s one fast roller-coaster ride of laughter. Don’t sit too close to the stage if you want to catch every line.

MSC has established a fine legacy among theatre-lovers from both sides of the curtain. Open seating (wooden benches with backs) can be made more comfortable by renting cushions at the gate. Nights can get cold when the fog rolls in, so dress in layers. Picnics are welcome. 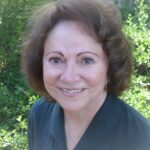