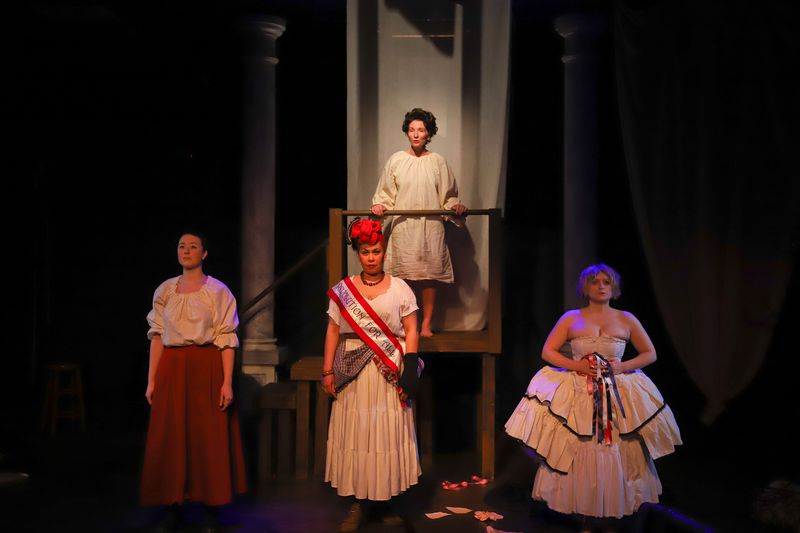 The French Revolution was a bloody mess. That’s putting it in the mildest possible terms. The country’s 18th century bankruptcy and crushing poverty led to an uprising that in turn became the Reign of Terror in which many thousands of real and imaginary enemies of the new state were imprisoned and killed. A civil war was a strong possibility.

At the same time, surrounding countries fearing that anti-royalty sentiment would spread, and seeing many opportunities in a weakened France, sought to conquer the bourgeoning democracy. This set the stage for the rise of the Emperor Napoleon Bonaparte, one of history’s most egomaniacal and brutal dictators.

Gunderson places one fictional and three historical figures into her theatrical caldron then applies heat to see what will happen, with mixed results. The primary figure is writer and political activist Olympe de Gourges (Equity actress Tara Howley Hudson), a champion of the rights of women and minorities and an outspoken critic of the Reign of Terror who went to the guillotine on November 3, 1793. Two strong secondary characters are Marie Antoinette (Lydia Revelos, fantastic), whose lavish spending was widely believed to be the cause of France’s massive financial problems, and Charlotte Corday (Chandler Parrott-Thomas), who assassinated revolutionary firebrand Jean-Paul Marat and was beheaded four days later. The fourth figure is Marianne Angelle (Serena Elize Flores), a fictional character who advocates for the rights of women and oppressed minorities. “How about liberté, égalité, sororité?” she asks.

Both stagecraft and acting are first-rate under the direction of Lennie Dean, especially by Hudson and Revelos, but this adventure into “metatheater” is seriously overwrought, the kind of play that might be more at home as a graduate effort by an art school drama club. The characters interact with each other—only experts in French history could state whether any of them actually met—and with their audience, smothered with abstruse intellectualisms as only the French can spin them, and arcane (for Americans, anyway) historical references. Ultimately, we learn that the whole convoluted affair is something bubbling in Olympe de Gourges’s soon-to-be-detached head, as she struggles to do something with enduring impact in her last few days—a dramatic structure very much like the film “Jacob’s Ladder,” where the final reveal is that the foregoing story has taken place in a dying soldier’s mind.

“The Revolutionists” is compellingly rendered and superbly well performed, but the excellence of the performance doesn’t overcome the script’s fundamental difficulties. It’s a prickly but rewarding show for those with theatrical fortitude and better-than-average understanding of both history and its presentation as entertainment. The Thursday April 4 performance features a talkback after the show, recommended.